The Duality of Bi

I think every portrait photographer can agree with me when I say that there are some relationships that develop between photographer and subject that are just different. You can’t put your finger on the why or how it happened, but there is something that is remarkable between the way you work on a set and a way you work on a set with that person in particular. For me, one of those relationships has developed with Bi ‘Killer Bee” Nguyen. We first met a few years ago through a mutual friend that I knew through Lululemon and she trained with for her MMA career. We got together and did a shoot at her boxing gym that was somewhat rushed and didn’t click quite as much, even though we captured one or two really memorable portraits from that session.

Those successes led to us shooting together again at the end of 2018 for a different type of portrait shoot. Bi wanted some softer images of herself for social media photos. She had so many fight images already that it was good to try and shoot some diversity for her. We created some branding images and – again – I tended to play in a safer arena to make sure we got something usable rather than push myself more to capture her and create portraits that encapsulated who Bi is as a person. I wasn’t sure yet what she was going to like and how I wanted to approach things. We still captured some great images and got some really different stuff from what Bi had shot previously. But… there was a hunger for something more.

Ha! Bet you didn’t see that coming. Seriously though, we were starving after the shoot that day and we went out to grab a bite to eat. It was during that lunch that I finally got to know Bi for who she really is. Not just the fighter or the Social Media presence, but know her for her. Know her story, her personality and what drives her to be who she is. It was eye opening and as we sat their eating at my favorite Pho shop across from the studio, I started realizing I had completely missed capturing who Bi really is as a person. I wanted to go back and shoot more but I knew we didn’t have time. So I let the ideas stir and sat on them until I got the other shots back to her and could plan something else.

When I got back from John’s workshop and at the same time I was planning Britt’s photoshoot, I had an idea for a few shots of Bi that I wanted to capture. See, when you really get to know somebody or put in the work to understand their brand, you start to capture things differently. I finally had an idea of how I wanted to capture Bi and the images I wanted to create. John and other people at the workshop like my buddy Chris Orwig (check out his new book!) helped me understand that portraiture is more than just capturing some cool images of a great looking individual. I mean, that’s part of it, but only a very small part. The larger part is understanding where they’re coming from. What drives them to be who they are, and what really defines them as a person. Once you understand those things, it’s your job to try and capture that and show them how you perceive them. If those two visions collide it can create for some amazing work.

The good news is, it seems like if Bi is home and I’m home, she’s down to collaborate. I gave her the vision of what I was thinking and she threw in her own little twists and spices of personality to help bring the images to life.

We met up at the studio again and I had pulled more images from Sandro Baebler, John Russo, and Mark Seliger that I really wanted to try and shoot. It was going to be a more focused shoot on capturing three different looks and getting mostly portraits with just a little MMA thrown in to round out the session.

The first shots were a little harsh, sexy, dark, and adding a little bit of color and flash to create something dynamic. I utilized two Vflatworld v-flats on either side of where Bi was going to be standing and snuck them in to be just outside of the frame of the image. When I say “just outside of the frame” I mean I had them to the point where I was fighting them at the edges the entire time. Next, I used two Profoto B2 heads connected to the same pack. Both utilized a 4×1’ Profoto strip box with the grids on them. I had both spun in the horizontal position as well. (See the BTS image for details) The first was the main light lifted high enough that the reflection just barely sneaks into the pupil for some life and angled down to create some drama and darkness in the face. The second was placed lower to create a reflection in the bottom of the iris. I powered the light down enough so it wasn’t effecting the face much but still bright enough to catch on the reflective surface of the eye. The way to do this is get your main light set up and the scene lit how you want it. Then, sneak the other light in and play with the power ratio until it’s where you want it. Pretty easy right?

Finally, we added the touch of having a fan to create some movement in Bi’s hair. I didn’t have a good way to mount the fan at the angle and height I wanted it, and I didn’t have an assistant on hand to hold it, so I made do with what I had. Time to put that expensive Texas A&M engineering degree to use right? Not really. I grabbed a spare C-stand and some gaffe tape and made it happen. 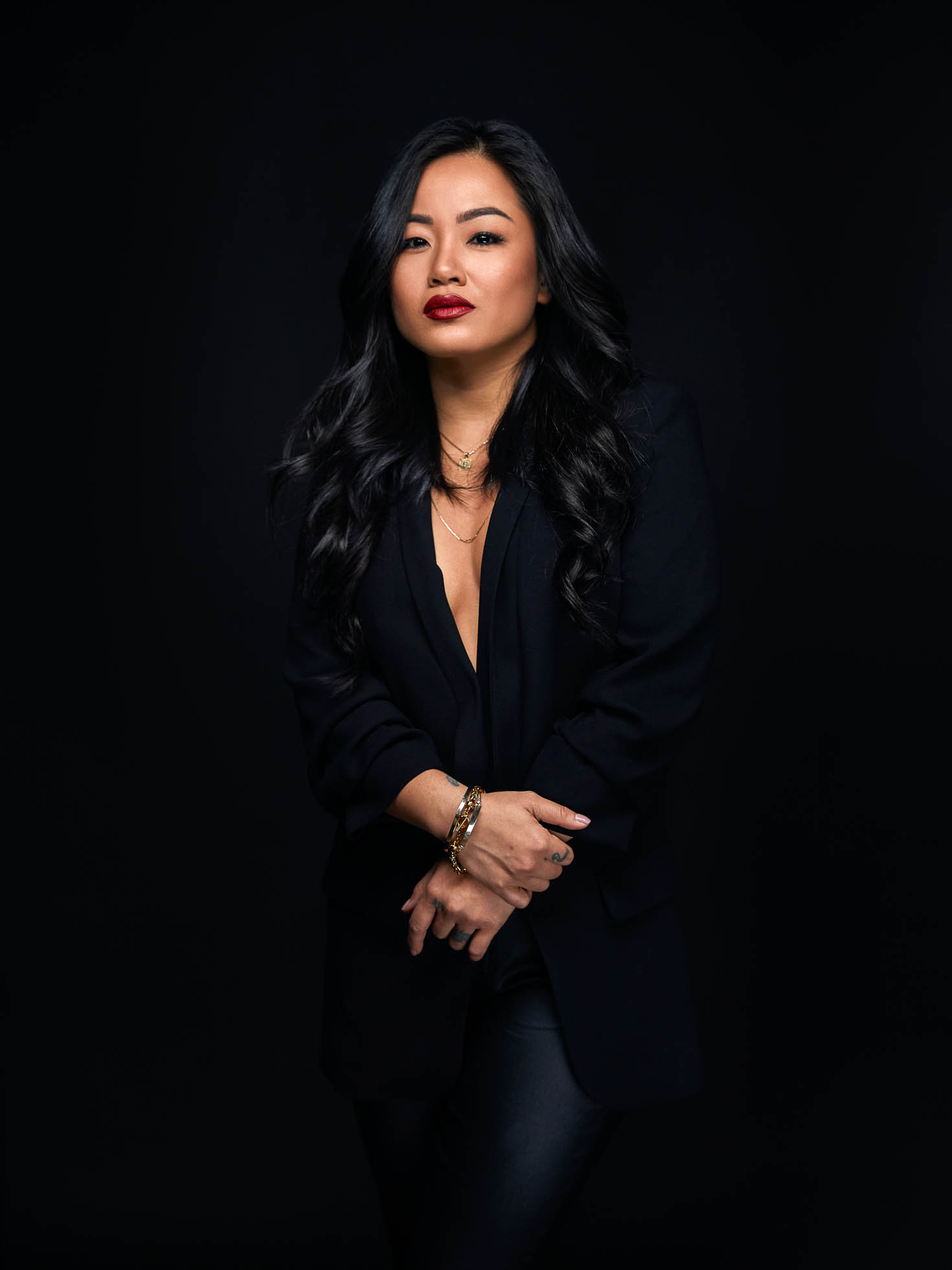 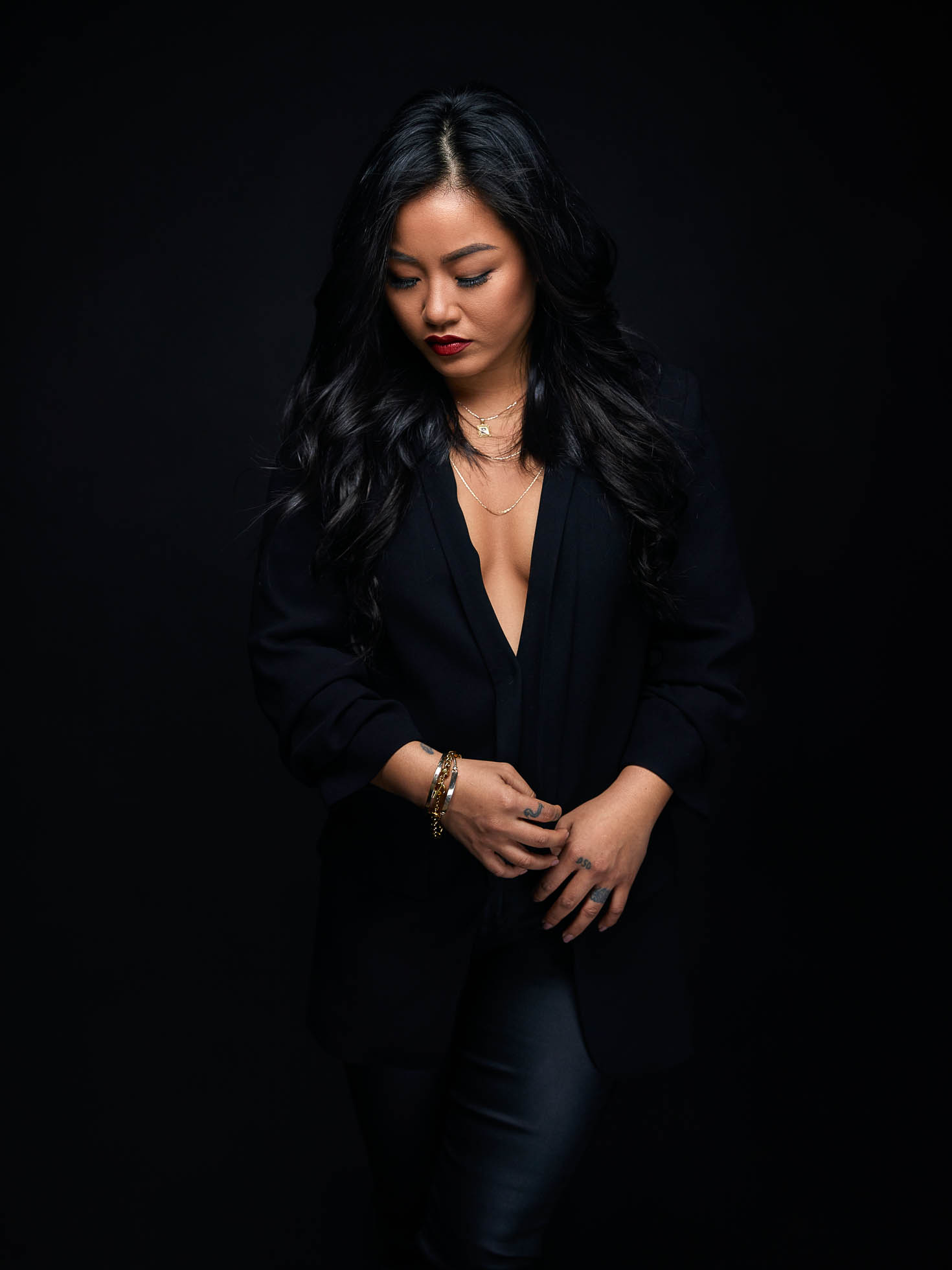 From Bi’s side, she grabbed a black pair of pants and a black jacket and threw on some gorgeous red lipstick. With the darkness in the image and the black background, I knew that the jacket would have enough detail to show you it’s there while still giving the look of having just Bi’s beautiful skin tone and red lips set against the darkness. The effect is stunning and was really shot for black and white, but I loved it so much in color I ended up leaving it there in the end. We played with that look for a while moving close and pulling back until we had some shots that both of us really loved. 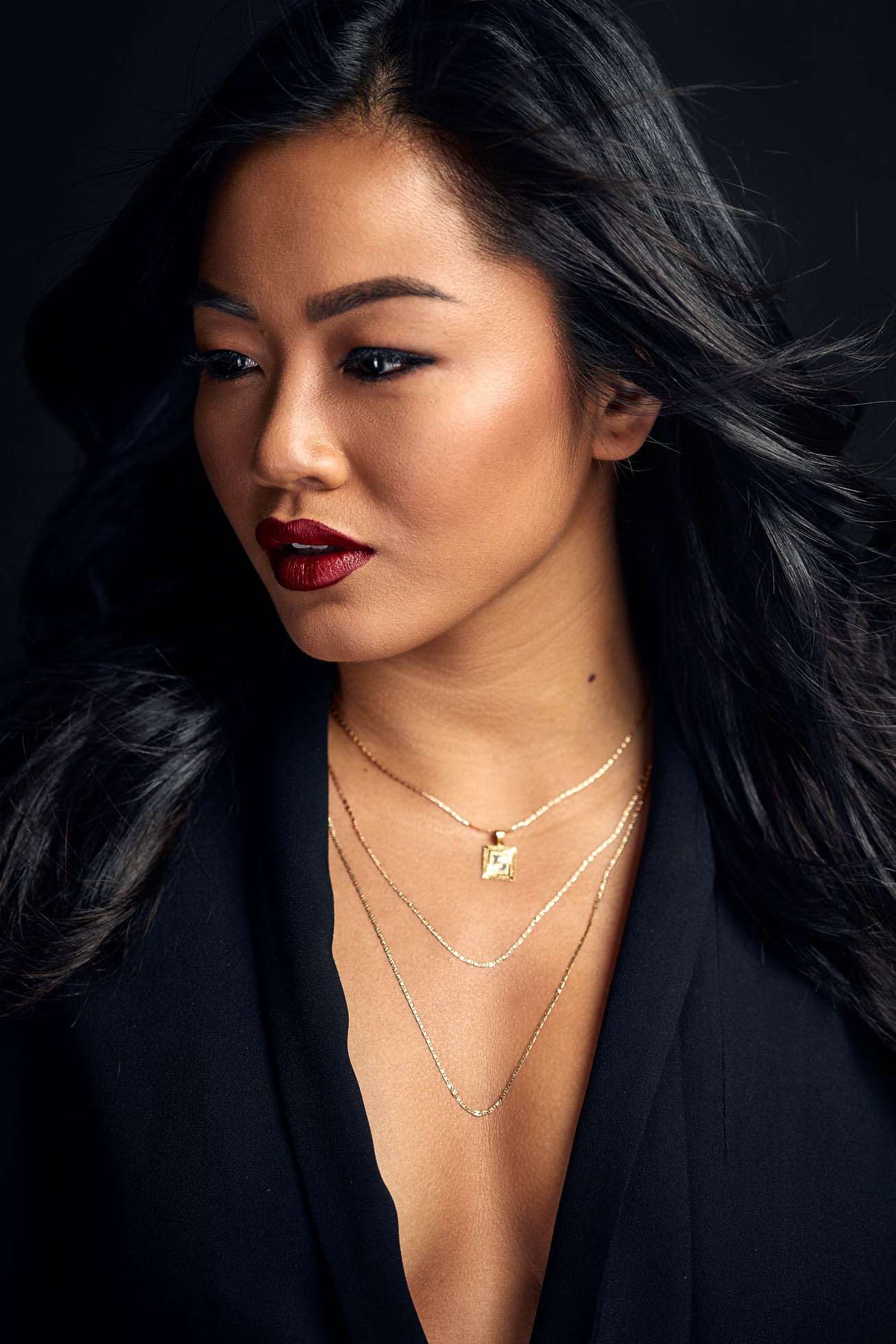 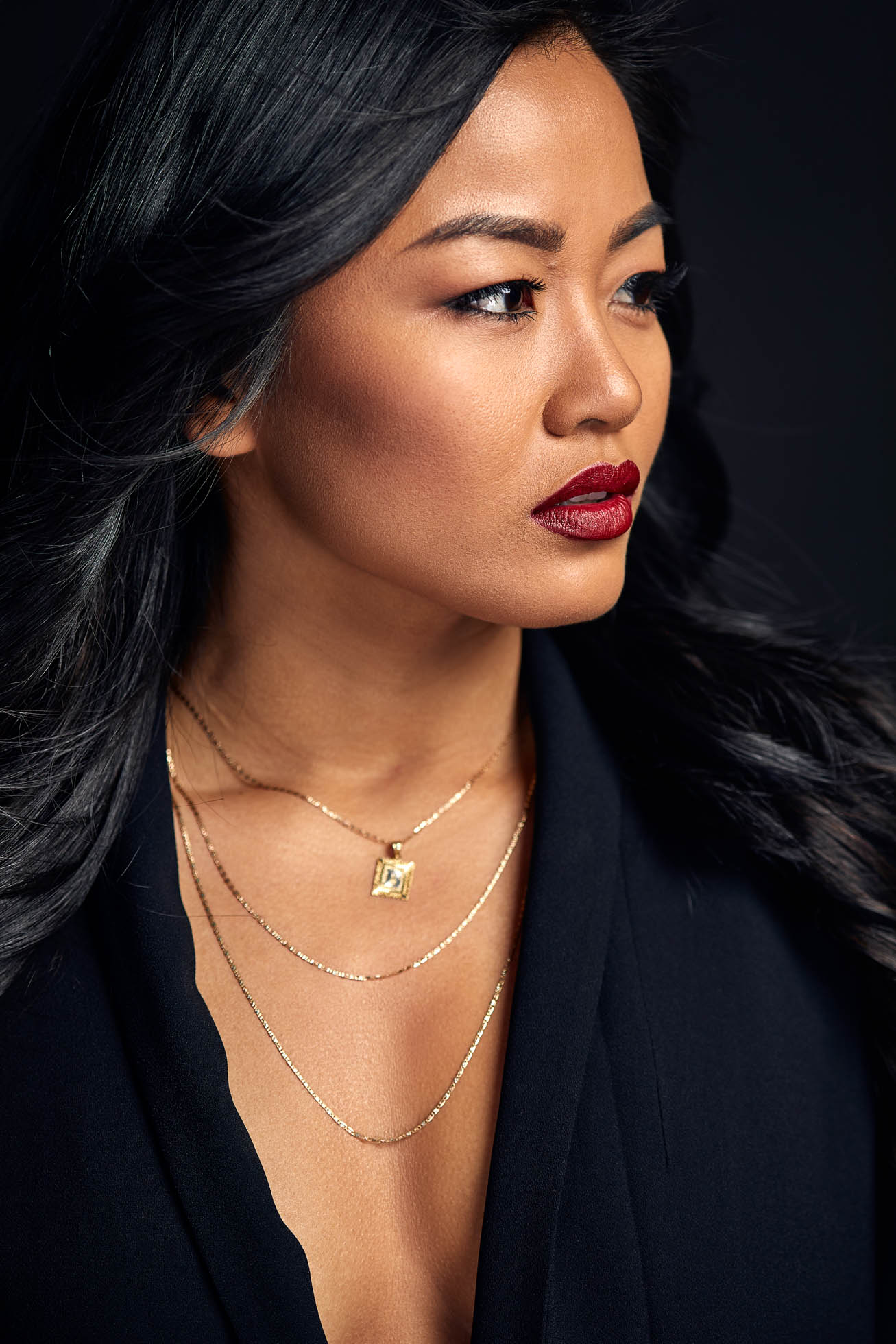 Bi changed clothes for the second outfit and before we started shooting the second look. she threw some kicks and punches on the black set for good measure. The goal was to create some awesome portraits, but it never hurts to get a few more MMA shots while you have the time and space right?

After the quick sports session, Bi fixed her hair back up and changed makeup for the second set. Meanwhile, I moved all of my lights (3) over and got everything set up. This was the image I was really excited about but wasn’t entirely sure how to execute before the day started. If it had been a paid gig, I would have been in early with an assistant nailing everything before Bi ever touched the set, but when you’re working on your own money and time, you do what you have to do. The idea was to shoot in front of the Oliphant backdrop and create some incredibly soft images of Bi to show the complete opposite side of her. Something fun and happy rather than dark and moody.

First, the lighting because I know that’s why y’all are really here anyway. The main light was a Profoto B1 head using the Elinchrom 69” Octabox. I had that about 8 feet in the air and tried to get the main part of the light above Bi’s head and bring just the bottom edge of the modifier to where her chin was going to be positioned. That gives a beautiful, feathered light source that is still coming from the top-down at an angle and creating some drama and depth in the light. To darken down the other side of her face, I positioned the V-flat about 3 feet away to pull away light while not crushing the blacks entirely on the dark side of her face. The other two lights were the B2s again with the 4×1 strip boxes with grids.  One was to camera left and the other to camera right. Far enough away that they weren’t effecting the face again, but creating some interest in the pupil a la Sandro Baebler. I tend to use the strips because I think the lines of light are more interesting than, say, a Beauty Dish or another round modifier. If I had more lights, I might play around more with a ring flash or some small reflectors alongside or in lieu of the strips. I also offset the positioning of the lights to create some depth and different between the two rather than having symmetrical reflections in the pupil. 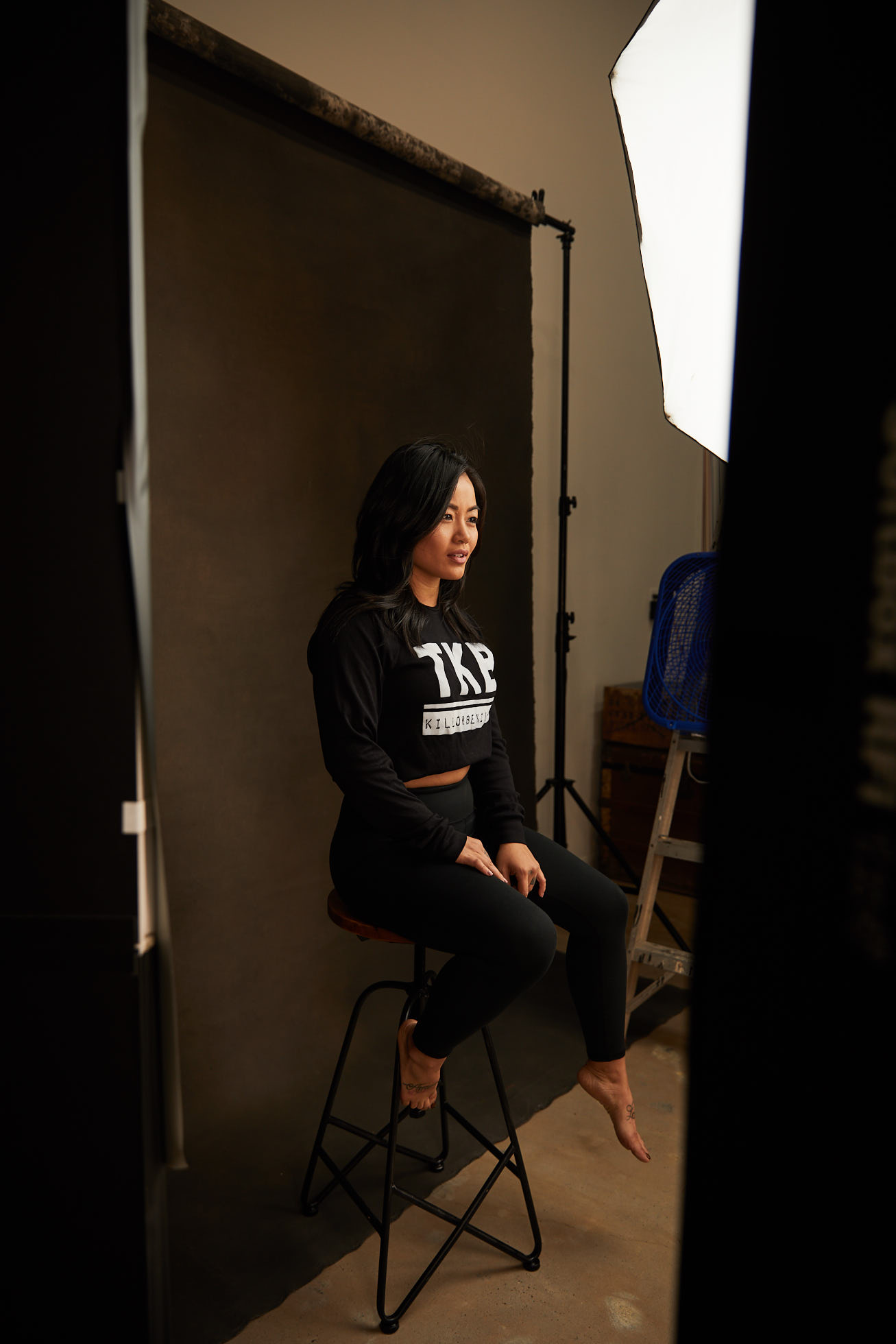 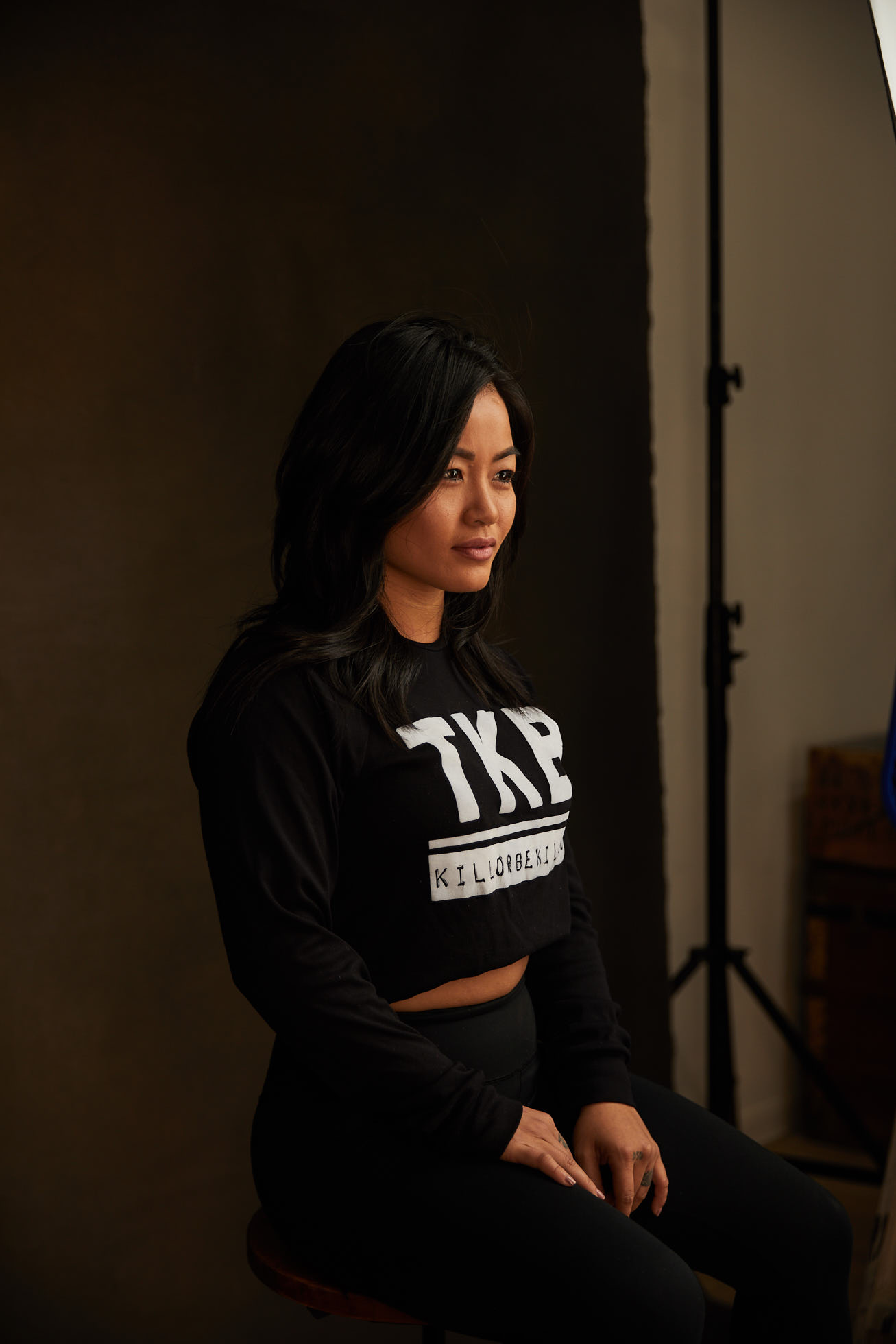 Finally, the set was finished by using the fan on a low setting directly to the left of Bi’s face (camera right, Bi’s left) to blow some hair across her face. That took a lot of playing around with to get the position and height right to get the hair to blow how we wanted. For all of the lights and lighting techniques going on here, figuring out the right amount of fan was a bigger pain in the ass than I would have ever imagined!

Everything set, Bi jumped in front of the Phase One and we went to work. I shot tethered to a large TV right next to me using Tether Tools cables and tethering to Capture One for instant feedback on what we were getting. The funniest part I can remember was after we captured the first 3-5 images and watching Bi see the images pop up and lose her mind. It was totally worth it! It’s moments like that that make me want to pick up the camera again and see if I can do it again and again. The images were my favorite of the day and totally different than anything I’d seen of Bi up to that point. It captured a different, more relaxed side of her that I loved and thought helped elaborate on who she is. She has this amazing, hardcore personality that she lives when she’s fighting or prepping for a fight (seriously, the girl is scary in the gym!) ,but she switches it off when she walks out of the ring and is an amazingly deep, caring, and passionate person in her daily life. The duality of Bi.