Getting Creative with Matt Hanson

Matt Hanson is a face that is not uncommon in my body of work. I’ve had the pleasure of knowing Matt and getting to work with him since early 2014 off and on. It has been awesome getting to watch him advance his career as a Professional Ironman Athlete, and an even more amazing experience to get to be a part of documenting that journey through our shoots together. I’ve worked with Matt for just ourselves, for larger projects, and for sponsored work – and we’ve tried to change it up a bit each and every time we’ve shot together. This last time he was in town for the North American Ironman Championships in The Woodlands, TX (Ironman Texas), I reached out because I had an idea for something completely different than what we had done in the past. I mean COMPLETELY different…

I have always tried to get lighting and the look of an image as finished in-camera as possible and only finished in Photoshop. A lot of times that means me hanging out of the back of truck, running or skating alongside a runner, or putting myself in a ton of crazy situations. This time, I wanted to just have some fun in The Studio and try to advance my Photoshop skills a little further than normal. I was originally inspired for the shot by Tim Tadder’s work with Peter Sagan, and some of the awesome, different images I was seeing being created with light tubes. The only problem is, I don’t have serious $$$ necessary to drop on light tubes. But, I had the idea of creating the tubes in photoshop on top of a simple $20 floor lamp from Home Depot. 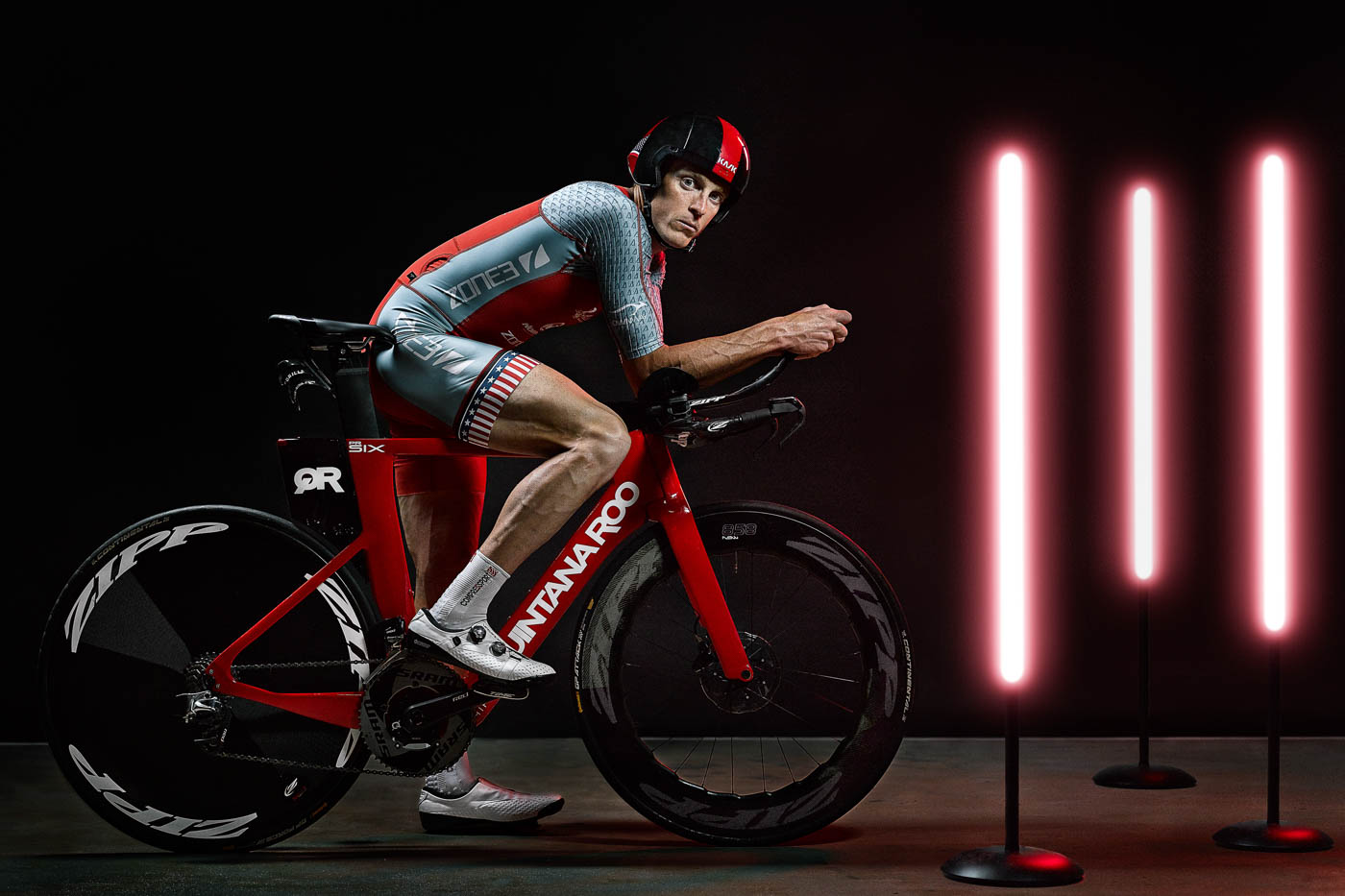 Matt’s colors have always had some sort of red in his kit and/or bike, so I wanted to use red tubes in the final image. The first trick here was to still get as much of that red in-camera as possible. So, I gelled the lights that would be coming from the direction of the photoshopped lights in the final images. I also tried to position the strobes so they would be throwing light from the same direction as the lamps in the final image. Next, I built my lighting setup around Matt and used a backdrop to create a black background that met the concrete floor. 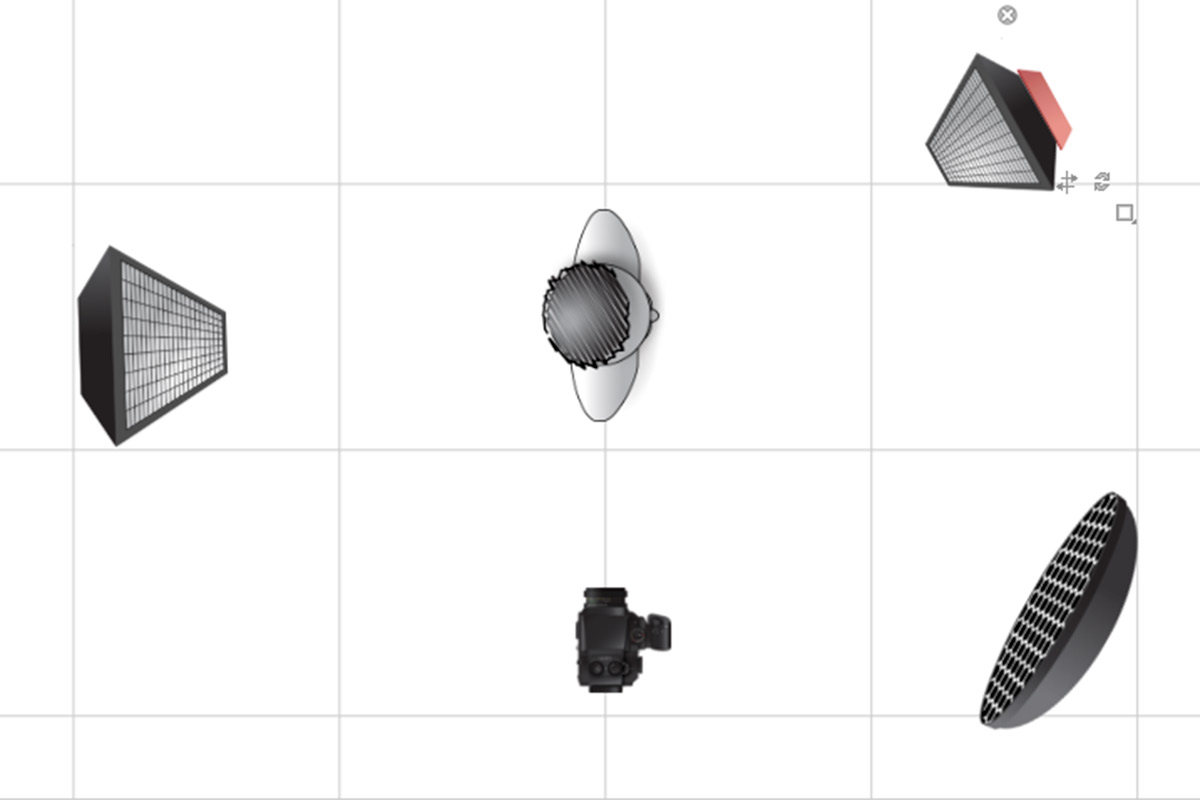 For the initial setup, I used 2 strip boxes on Profoto heads. Both utilized grids and I applied a red gel to mimic the light coming from the light tubes in the final images. The third light was a Profoto White Beauty Dish with a 20 degree grid to Camera right for some light specifically onto Matt’s face for a little pop of light. 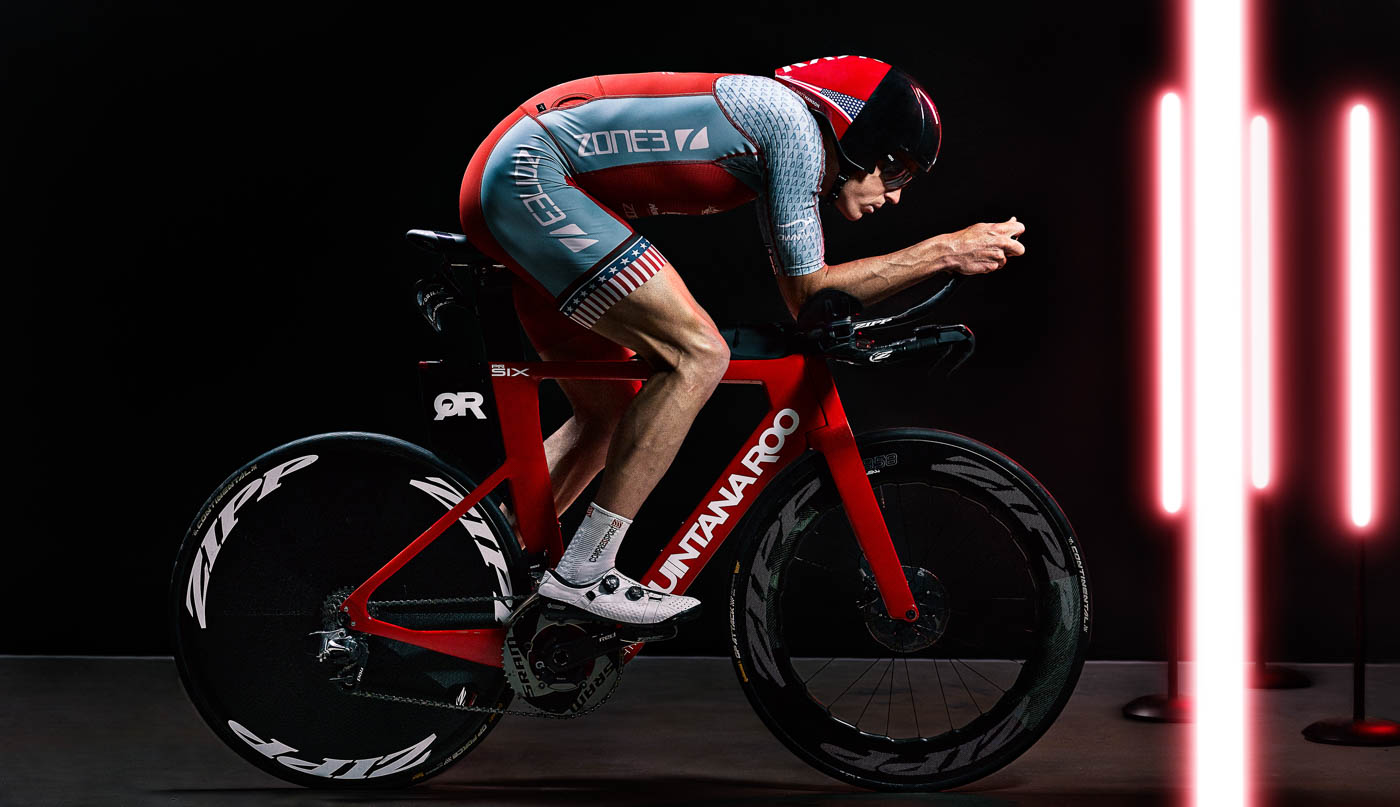 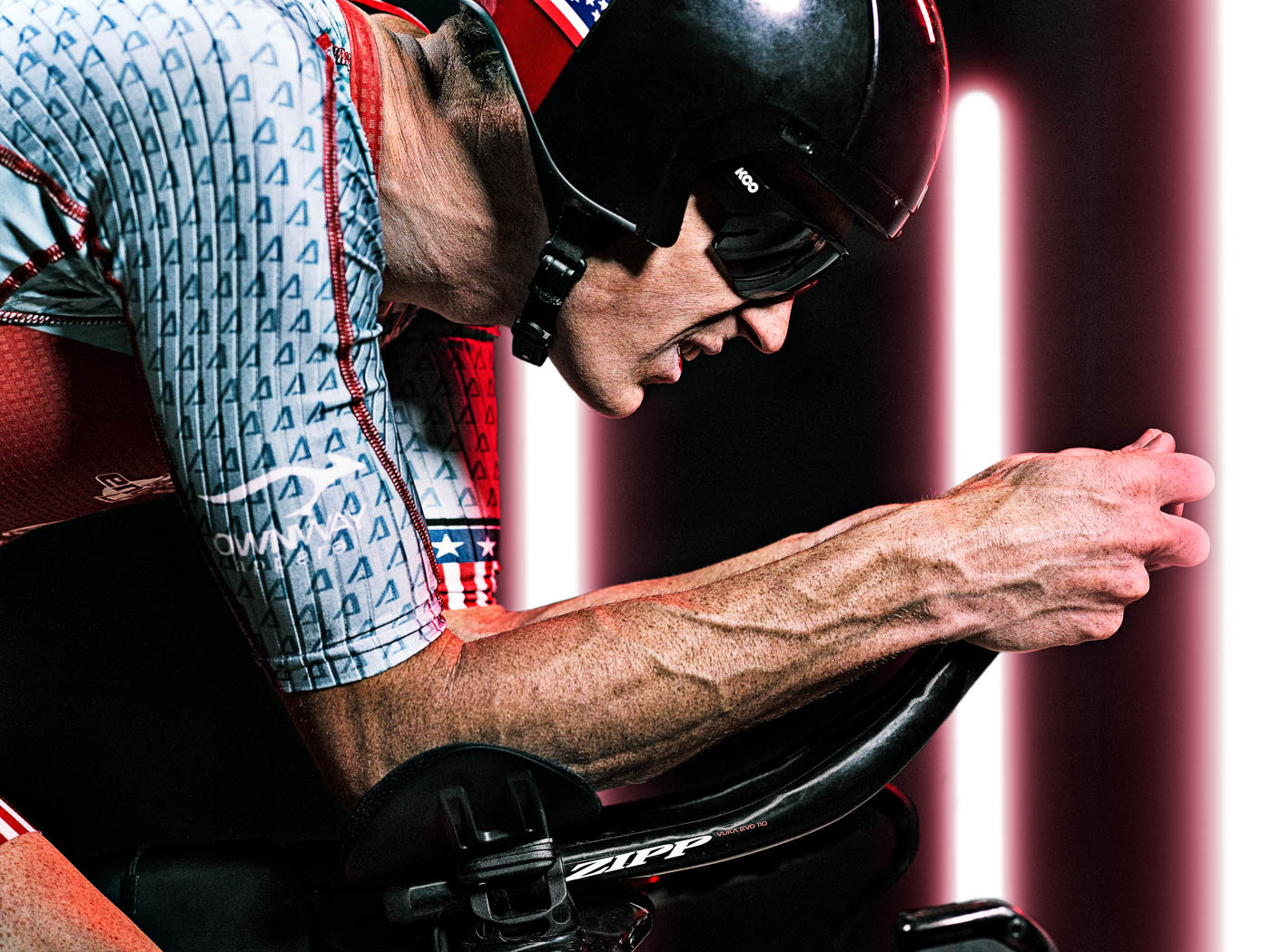 Finally, it was time to shoot some images, but I wanted things to be easily composited, so I utilized a tripod for the first few images and had my assistant move the lamp to different places so I could easily photoshop them in later and keep the overall feel of the image as realistic and un-photoshopped as possible. After those first few were shot, we started having some fun off of the tripod with different looks and positions. After shooting with Matt on his bike for a little bit and being happy with what we were able to achieve, I decided to add another element to the shit: some fog. I had just gotten a new hazer machine and really wanted to get it out and play around with it to see how quickly it could haze up the entire studio (which is a pretty good sized space). We had Matt sit down on a bench and I switched out the strip light I’d been using for the hair light to a medium sized Octabox – the Elinchrom Rotalux 39” Octabox. I love this light for a top-down light because it has such a deep positioning of the light. That depth creates a nice, soft spotlight on the subject that really drapes the shoulders to bring depth and drama to the portrait. 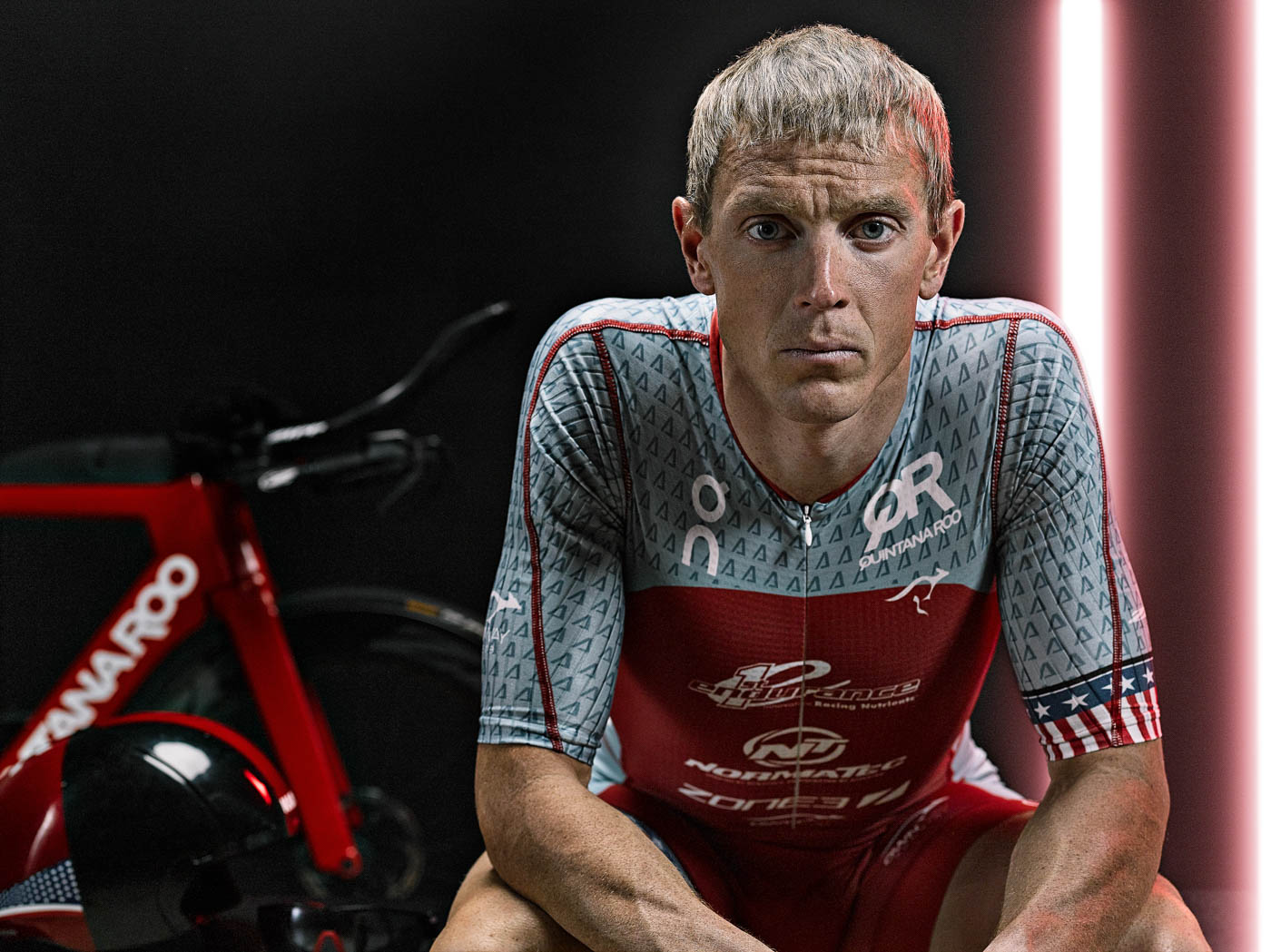 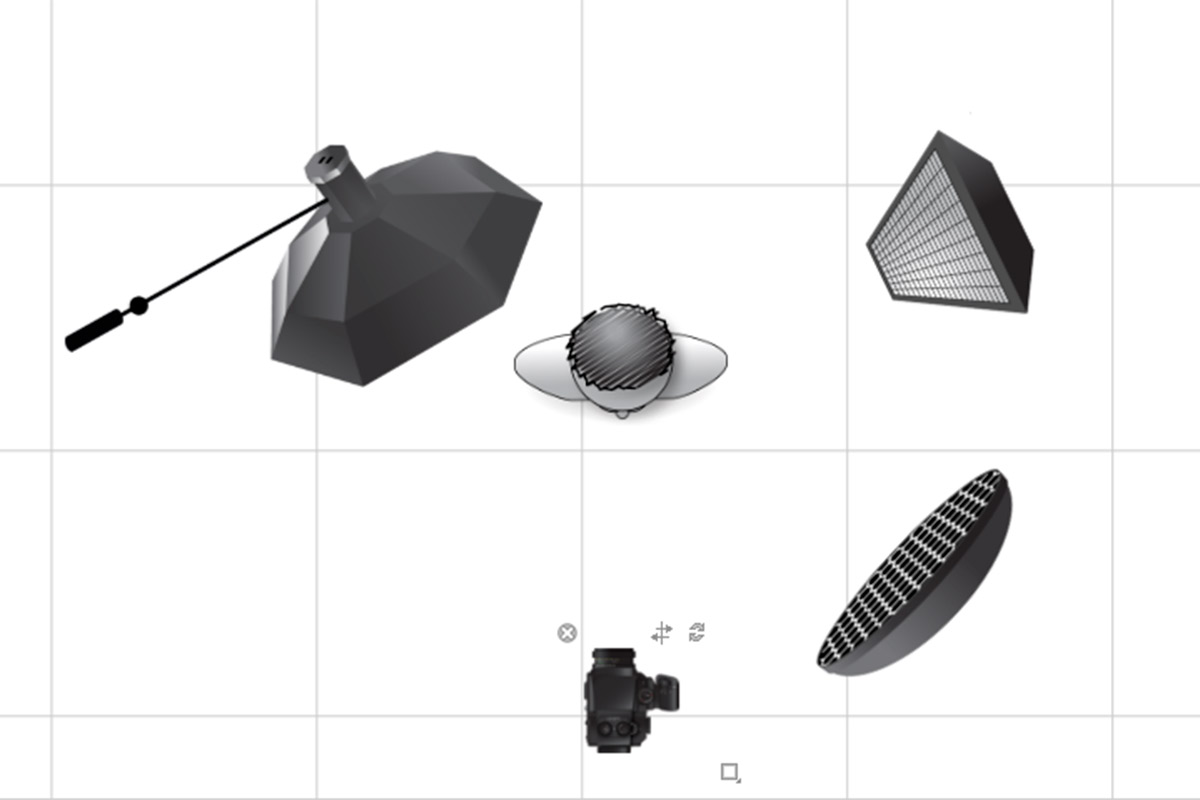 Extremely similar to the first setup, but I replaced the strip light that was lighting Matt’s back for the deep Elinchrom Rotalux 29″ Octa. The haze also gave a little more softness and wrap to the gridded Beauty Dish.

Feeling good about what we’d shot, I wanted to get one last image of Matt with a simple, intimate setup that was on black to give us something completely different from what we’d shot in the past on white. You can see all of the light setups in the Behind The Scenes video as well as the Photoshop file build that I used to create the lights over on my Instagram page (@paytonruddock). 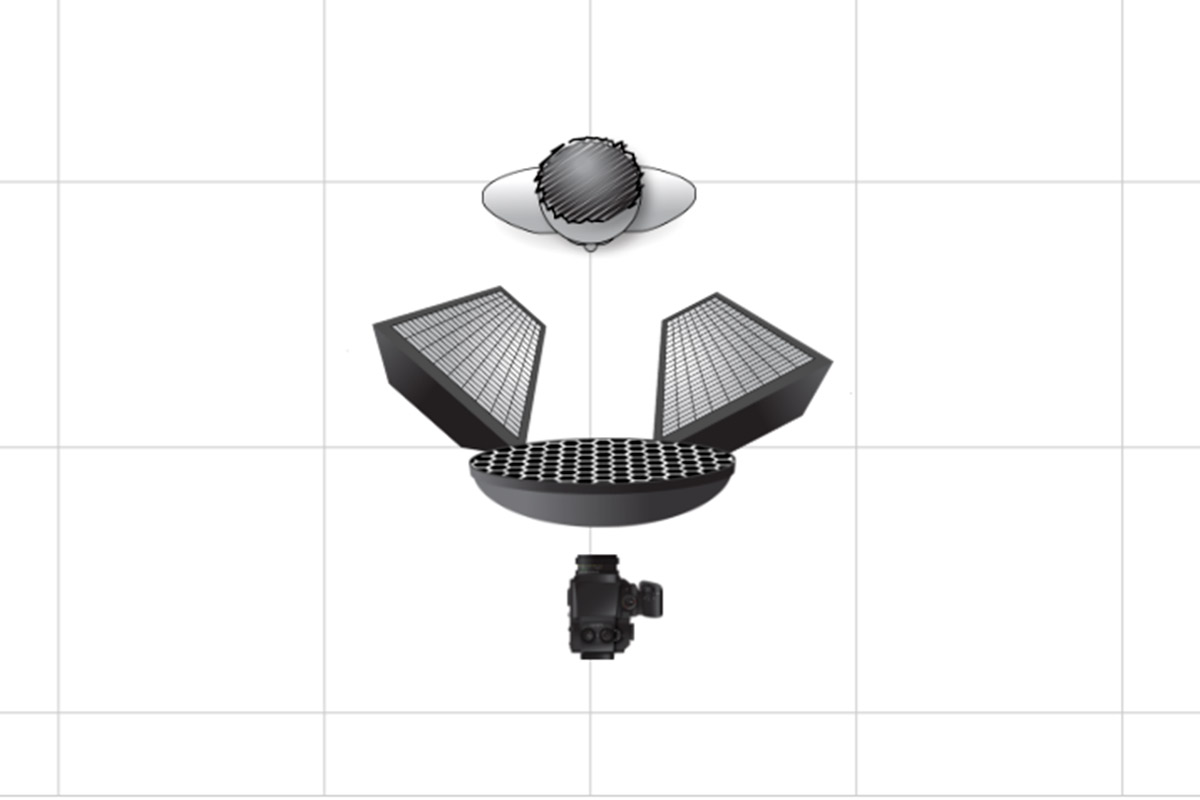 This is a really tight setup and give an AWESOME catchlight in the eyes. It was designed to get close in and almost mimic a ring light with only a slightly nicer look because of the larger sources. 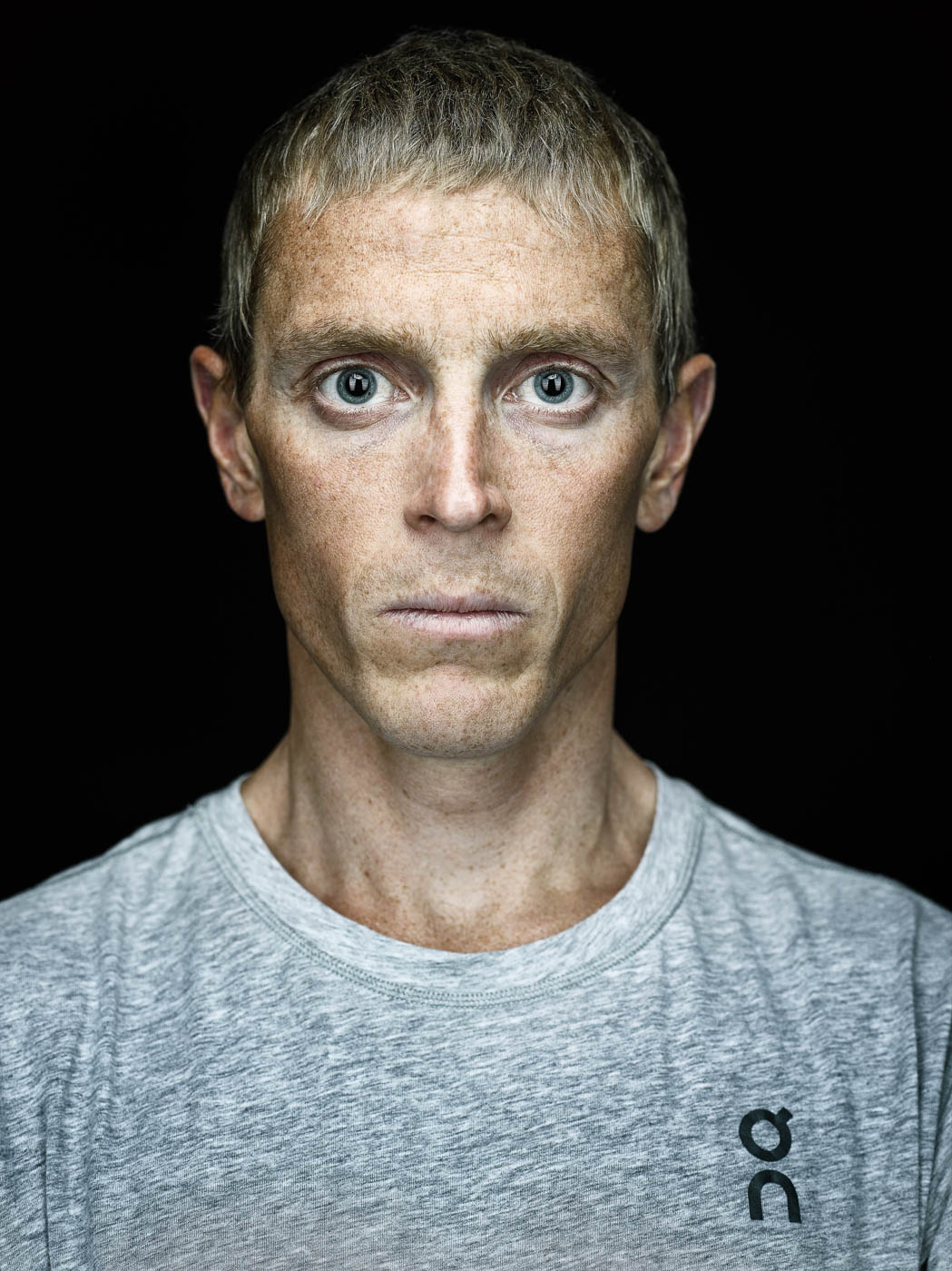