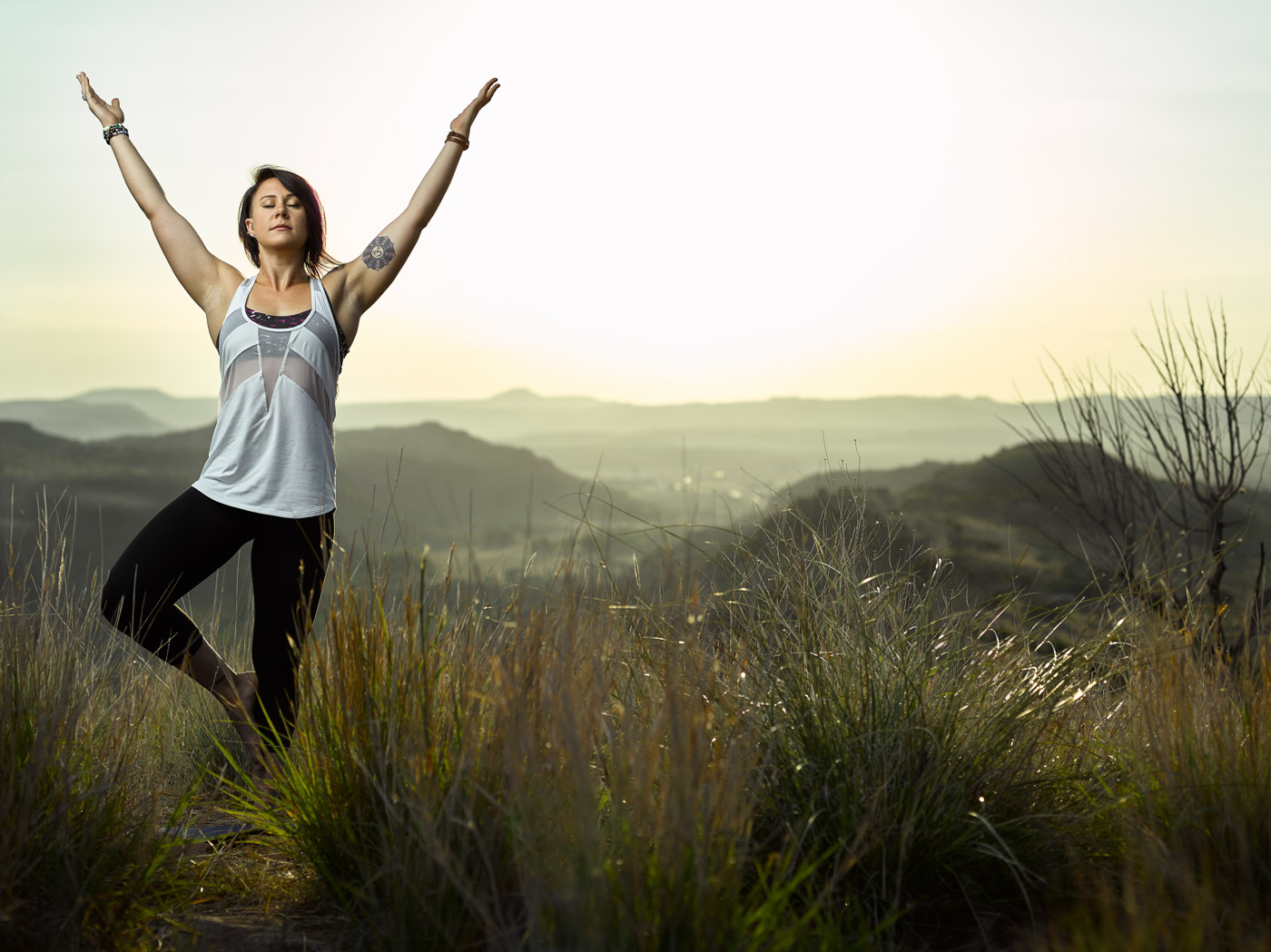 On Friday I posted my thoughts and experiences during my first stint in Marfa for Lululemon. Today, I wanted to share another experience from Marfa, but more of a mini-experience within the second group that I’ll be sharing more about next week. One of the things I mentioned and showed to an extent in the photos is the desolate beauty that makes up West Texas. You would think that the state is extremely flat and not very interesting once you get out of the hill country around Austin and San Antonio, but it is a gorgeous state when you get far enough West. Marfa, as it happens, sits at the foot of the Ft. Davis Mountains and is just a short drive away from the house we were staying with Lululemon. During the first trip, I scouted a few different things and tried to think about the timing that would be necessary to put together a quick morning shoot before activities got going for the day. I knew it was going to have to be super early because we would have to travel, set up, shoot, tear down, and get back before breakfast or any type of early morning yoga or workout. A lot to ask of a group of people who were going to be there going, going, going all day after that photoshoot. But, like any good photographer, I asked anyways! So, now that I had the idea and knew what it was going to take, here’s how it actually went down: 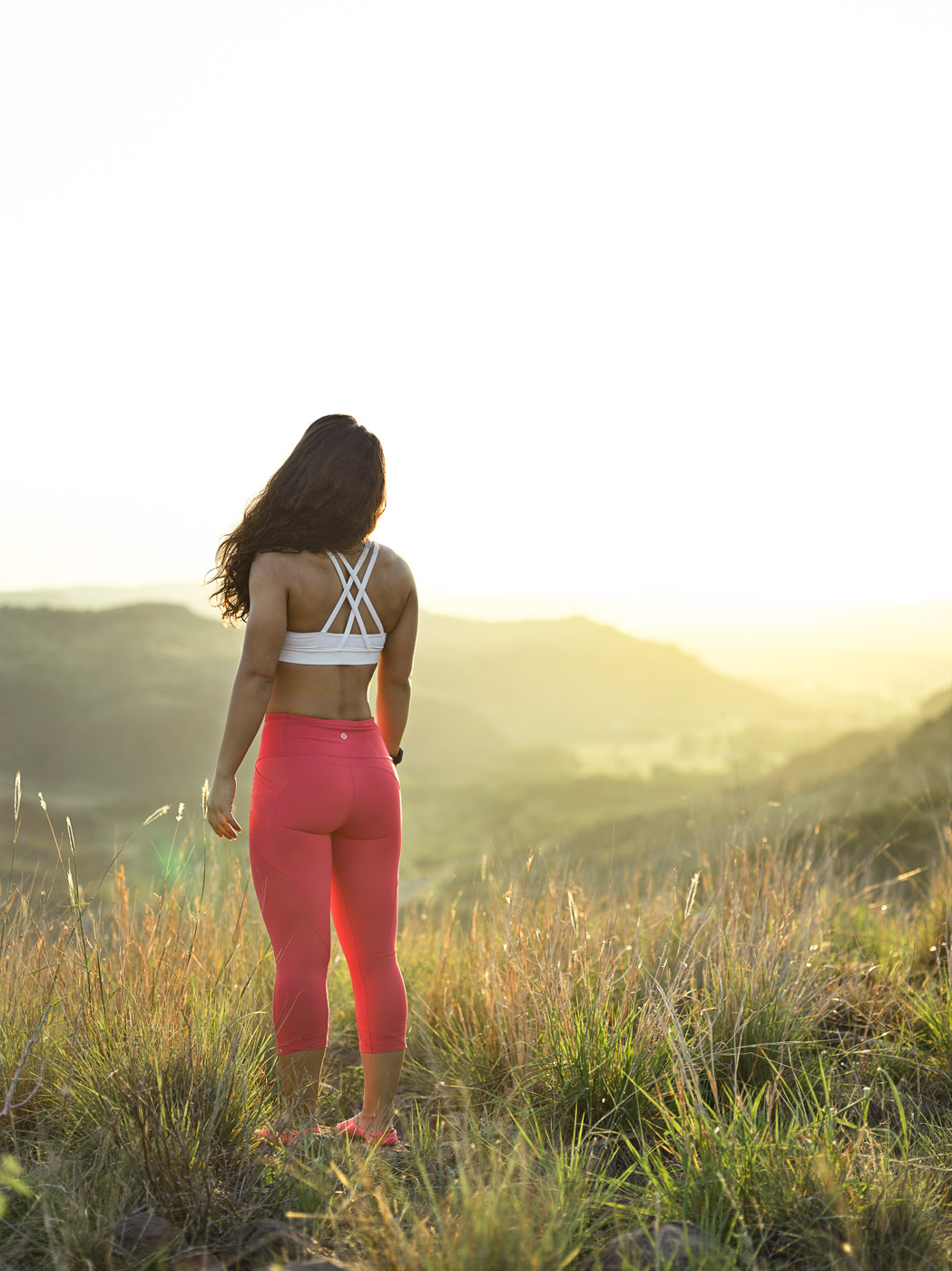 For the second and third groups, I had asked my friend and fellow photographer Eric to come help me out and be a second/co-shooter of sorts for Lulu. During the entire drive out there I tried to talk him into an early morning shoot if we could set it up as well because I wanted to get some photos that were a little more stylized in the way I typically like to shoot. Eric, being more of a photojournalist and documentary style photographer, was all about it and learning a little more about how I like to shoot and how I use lights to shape my landscape and shots the way I want. From there, we took the first day or two with the second group to talk a few of the girls into waking up, hiking with us, and shooting at the break of dawn. We (somehow) convinced three awesome girls – Shannon, Adyn, and Luna – to accompany us, and we set the departure time for Ft. Davis at 5:45 AM. Always a fun wake up time when you were up with the group having a good time and enjoying the company until the wee hours of the morning right? 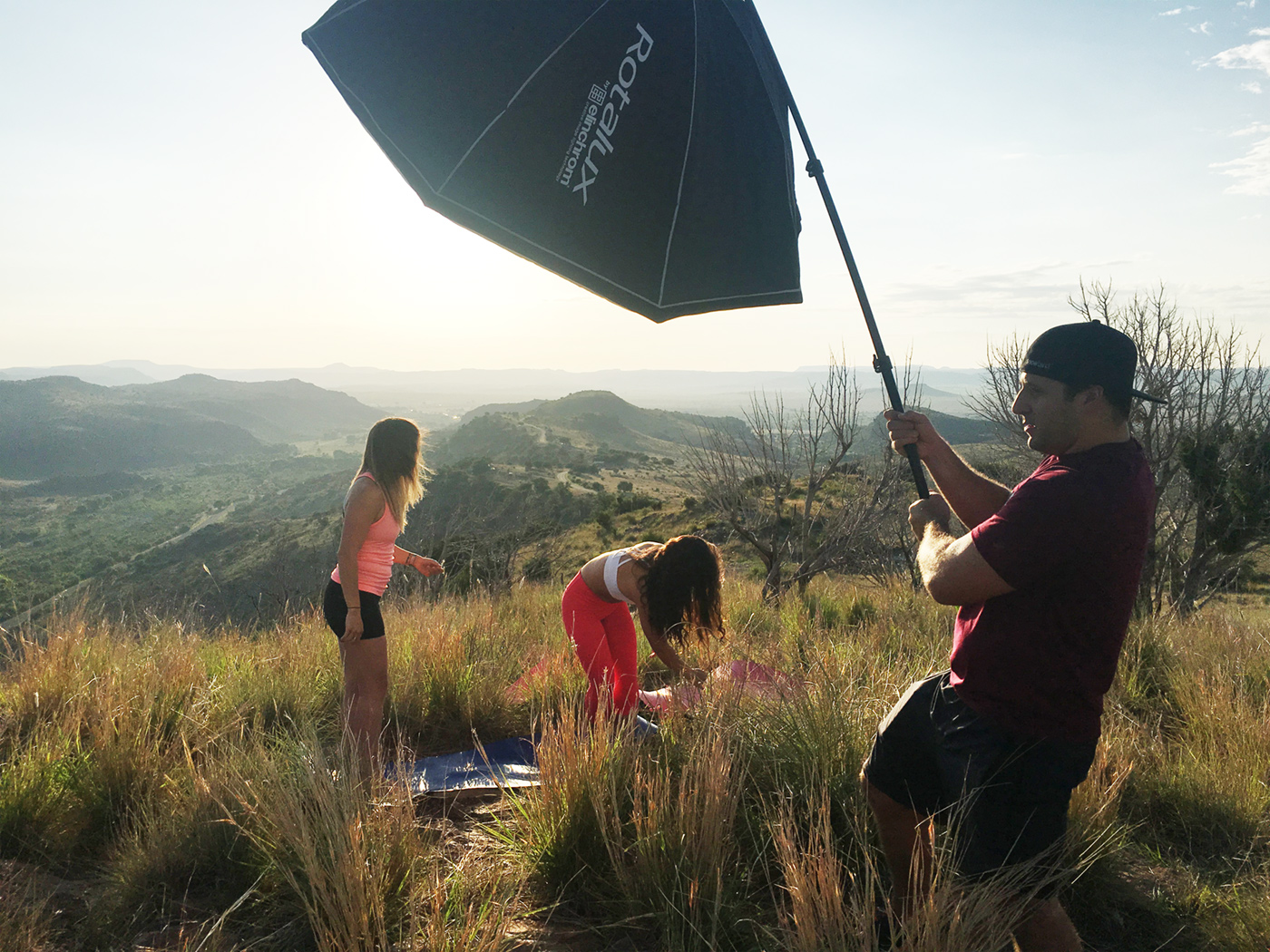 Thanks Eric for the quick iPhone BTS shot!

After a quick, cold shower and shotgunning a Red Bull, we were off and headed for Ft. Davis in the dark, watching rain clouds move in from the East and hoping we wouldn’t get rained off the mountain before we were able to shoot. We arrived about 20 minutes later to the park and hit the trail up to the lookout point just as it was light enough to see where we were going to be putting our feet without tripping. The climb was fun and a bit of a scramble… until we realized the place we wanted to shoot at was, in fact, right next to the road we could have driven up. Not the realization you want to have, but great to get the blood flowing and the mind working before it was time to bust out the cameras and have about 30 minutes to shoot before we had to tear down and head back. Plus, now I could just run the mile or so back down the mountain alone and grab the car while they broke down and packed up. 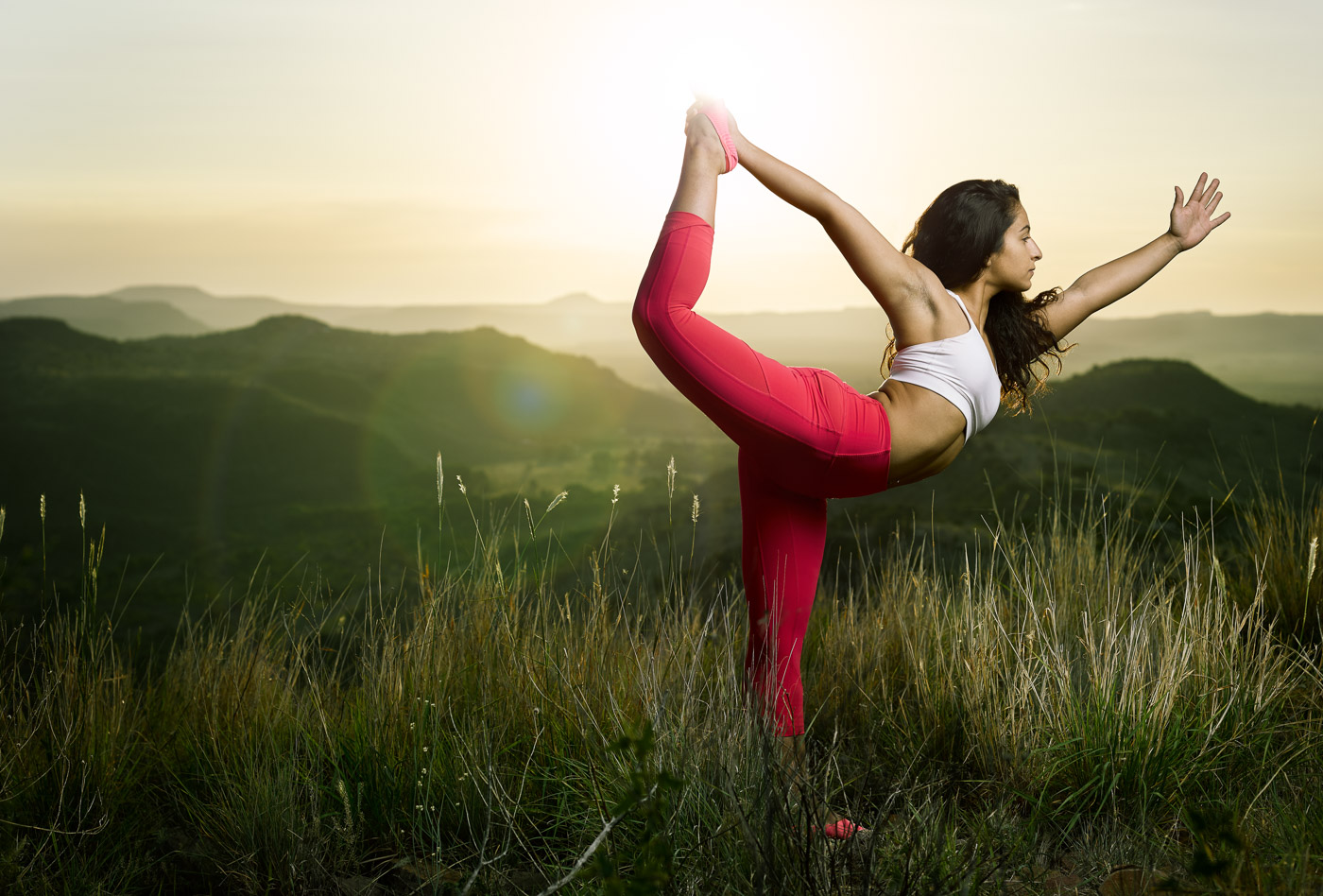 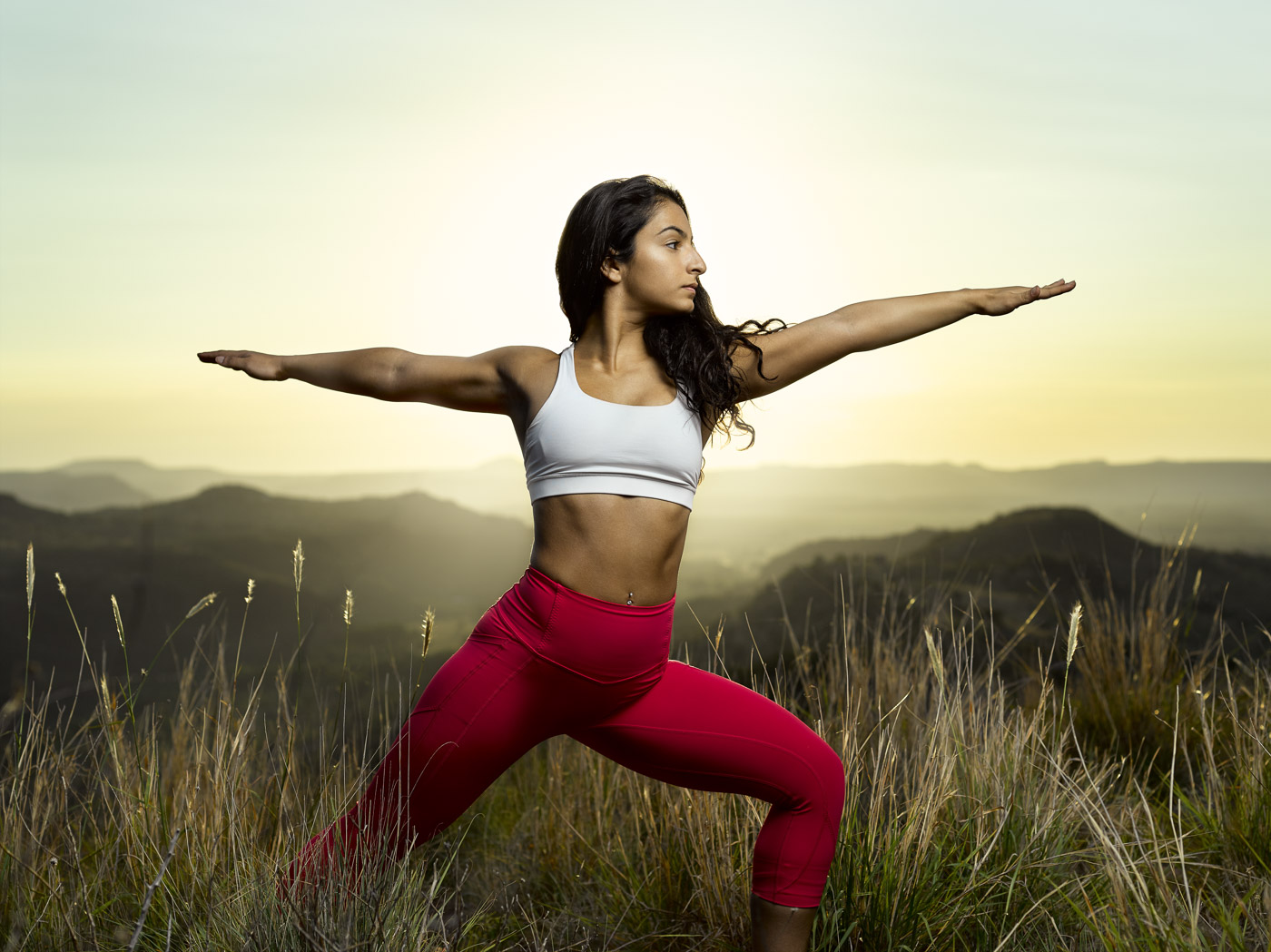 Once we looked out over the valley though, we realized our timing was absolutely perfect and the treacherous call time seemed completely worth it. The sunrise was just cresting the lower mountains in the distance and the light spill through the valley and the early morning mist was absolutely astounding. Eric and I immediately got to shooting some quick natural light shots of the girls. They, on the other hand, immediately set off to practicing some yoga and taking in the glory of the morning before them. It was really quite extraordinary to experience and we almost felt bad for asking them to stop so we could start shooting some more staged poses and shots. The experience alone was magical and it almost felt like a sin to cut it off a little quicker than they probably would have liked. But time was of the essence… 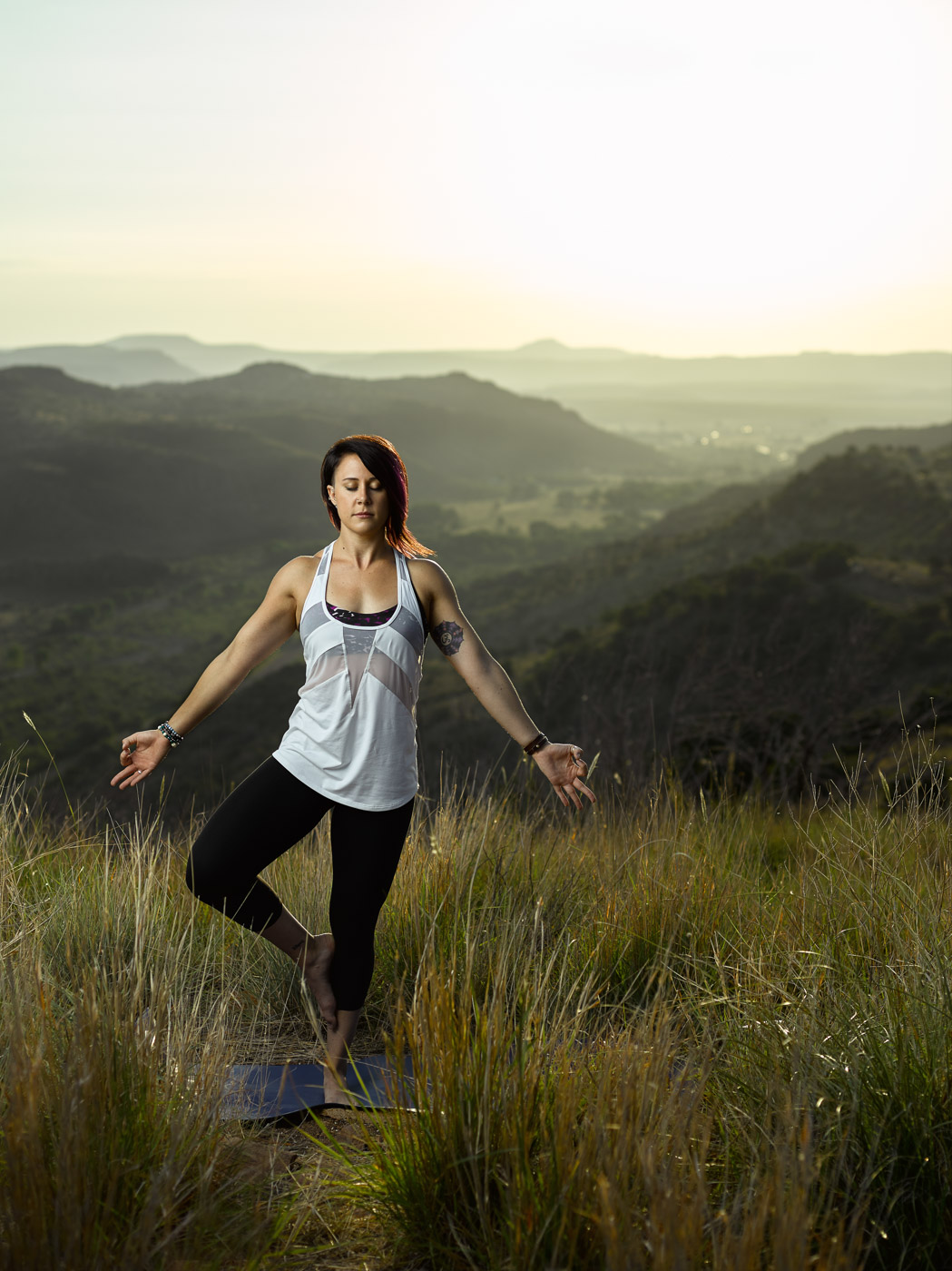 Now on to the lighting. Since we expected to be hiking to a little more remote setting, I had with me what I could carry on my back in my F-Stop Tilopa bag which included:

So we were rolling pretty light. Looking at the beautiful, soft light that was literally surrounding us that morning, I wanted to try and stay with that same feel, so I passed my usual favorite modifier – the beauty dish – for my favorite portrait modifier, the Rotalux. The soft, wrapping light that it creates meshed really well with the sunrise behind us and the truly ethereal feeling of the moment. Keeping with that feeling, I asked the girls to really just keep the poses simple, fluid, and tranquil. They got it on an almost esoteric level and this captures perfectly why I love working with athletes: they just get it when you give them an idea of the moment because they know how that feeling effects them, what creates that feeling, and how to convey it in front of the camera. Ask a yogi for tranquil and they kill it, ask a triathlete for determination and they know it, ask a Crossfitter for grit and they deliver it. I love it and these girls were no exception. They killed it and delivered in a huge way. 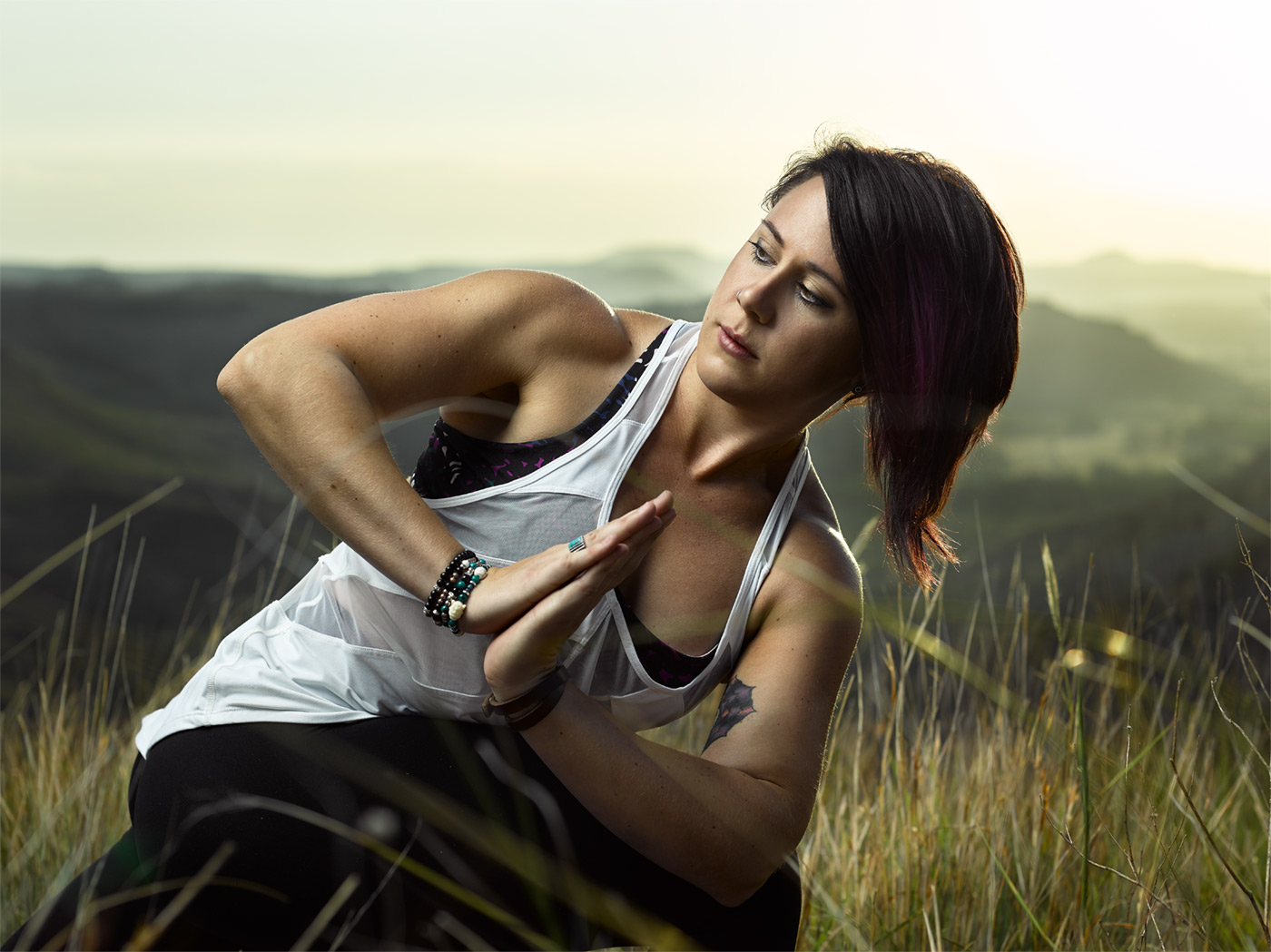 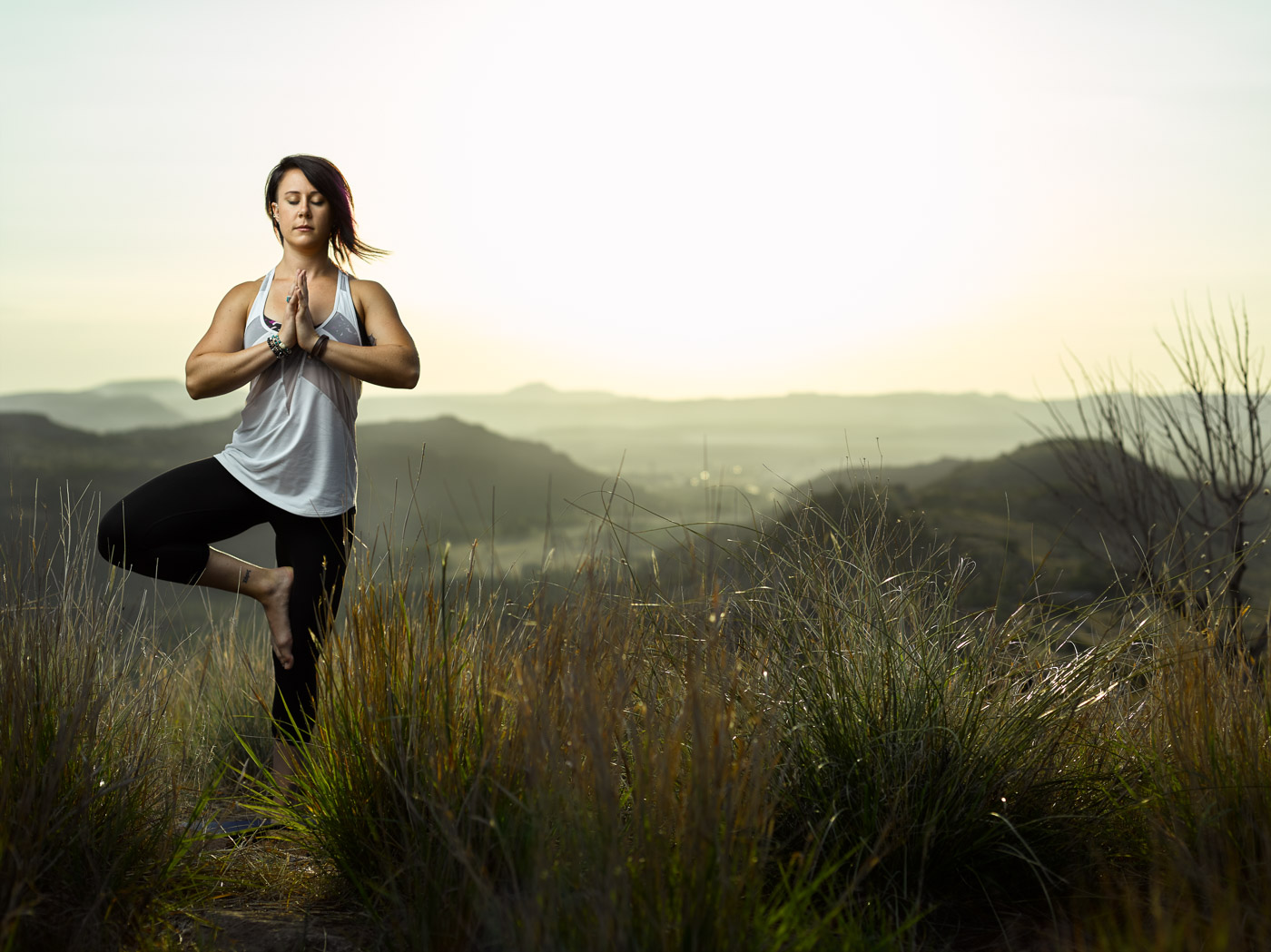 We shot quick and I even got to play the part of light stand for a good amount of time while Eric directed and shot with lights for the first time outside of a studio setting. I can report that he now owns one and absolutely gets why I love working with mine! Afterwards, I took off running for the car, dodged a snake or two on the scramble down the mountain, and can happily report that we made it back to the house before the majority of people were even awake and moving around. Another successful shoot (as you can see) and another awesome adventure! 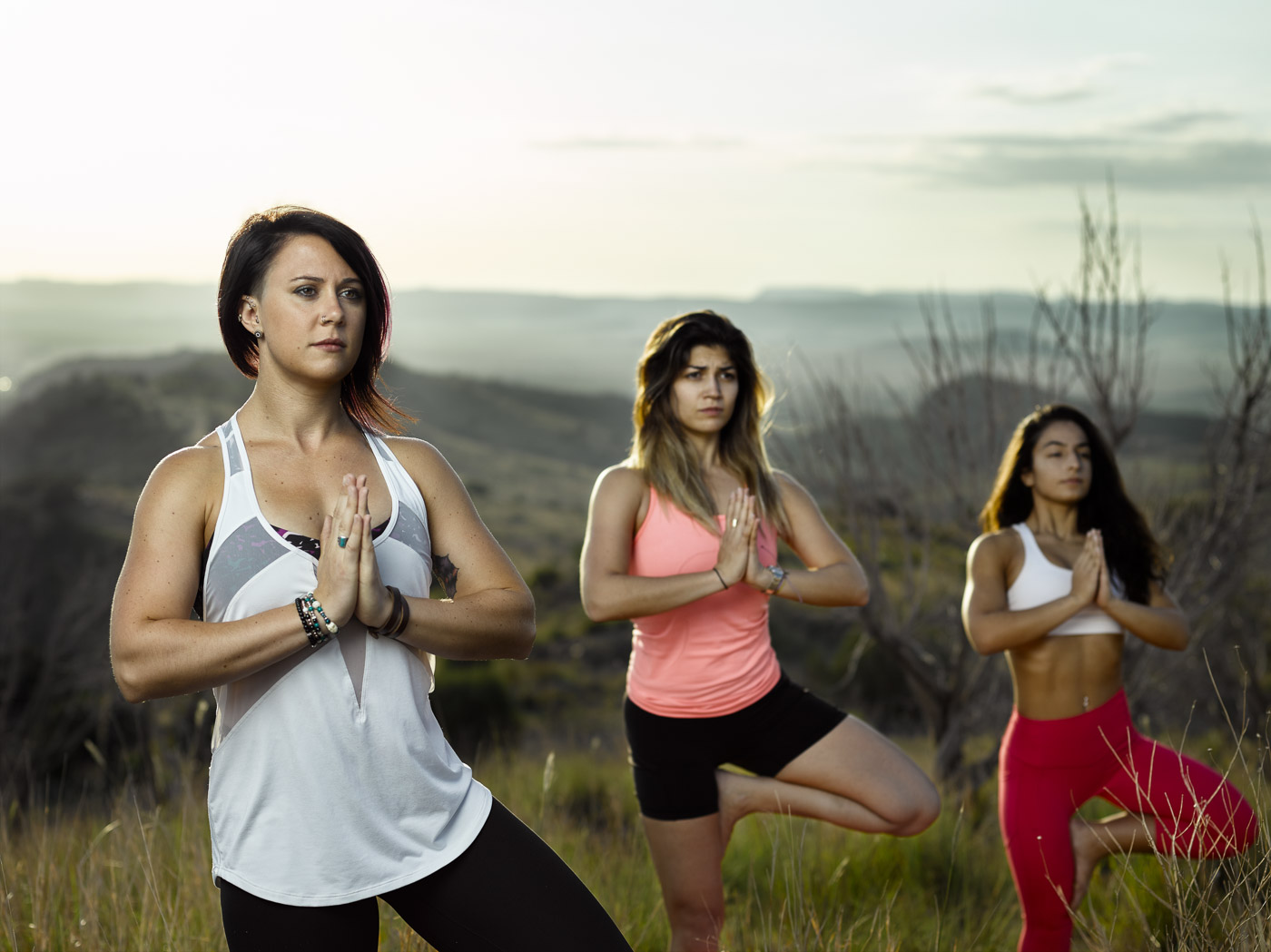 Want to keep up with me and the crazy crap I’m doing on a day to day basis? Be sure to take a look at my Instagram stream for behind the scenes materials, or follow my thoughts and finds on Twitter to keep up with me in the field.