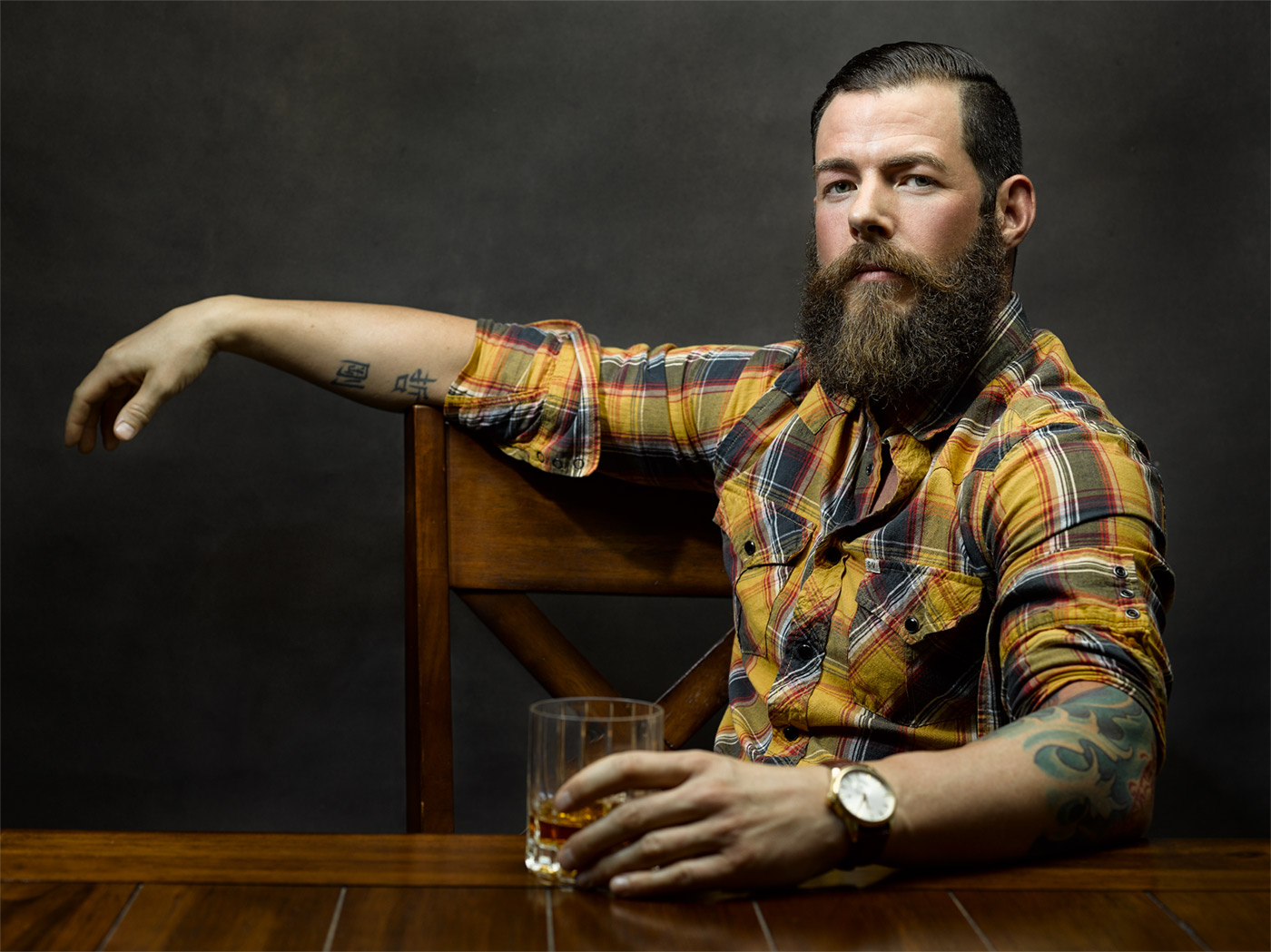 As a portrait photographer I’m constantly studying people’s faces, styles, personalities, and expressions. The human face is so amazing and telling even before words start pouring out of it, and sometimes you just see a look that you would love to photograph. I see them all the time and until recently I would just say to myself, “Damn that would be a cool portrait to take with this lighting or that background.” It wasn’t until I saw an interview with Tim Tadder where he was saying that he carried around a stack of business cards for just that occasion. It all made way too much sense to me that I had to accept the practice and start doing it myself. I mean, why wouldn’t somebody want an awesome portrait taken of them? It helps you build your portfolio with some really different and cool looks, it’s an awesome kindness to extend to somebody, and – ultimately – if they say “no” you’ll most likely never see them again. 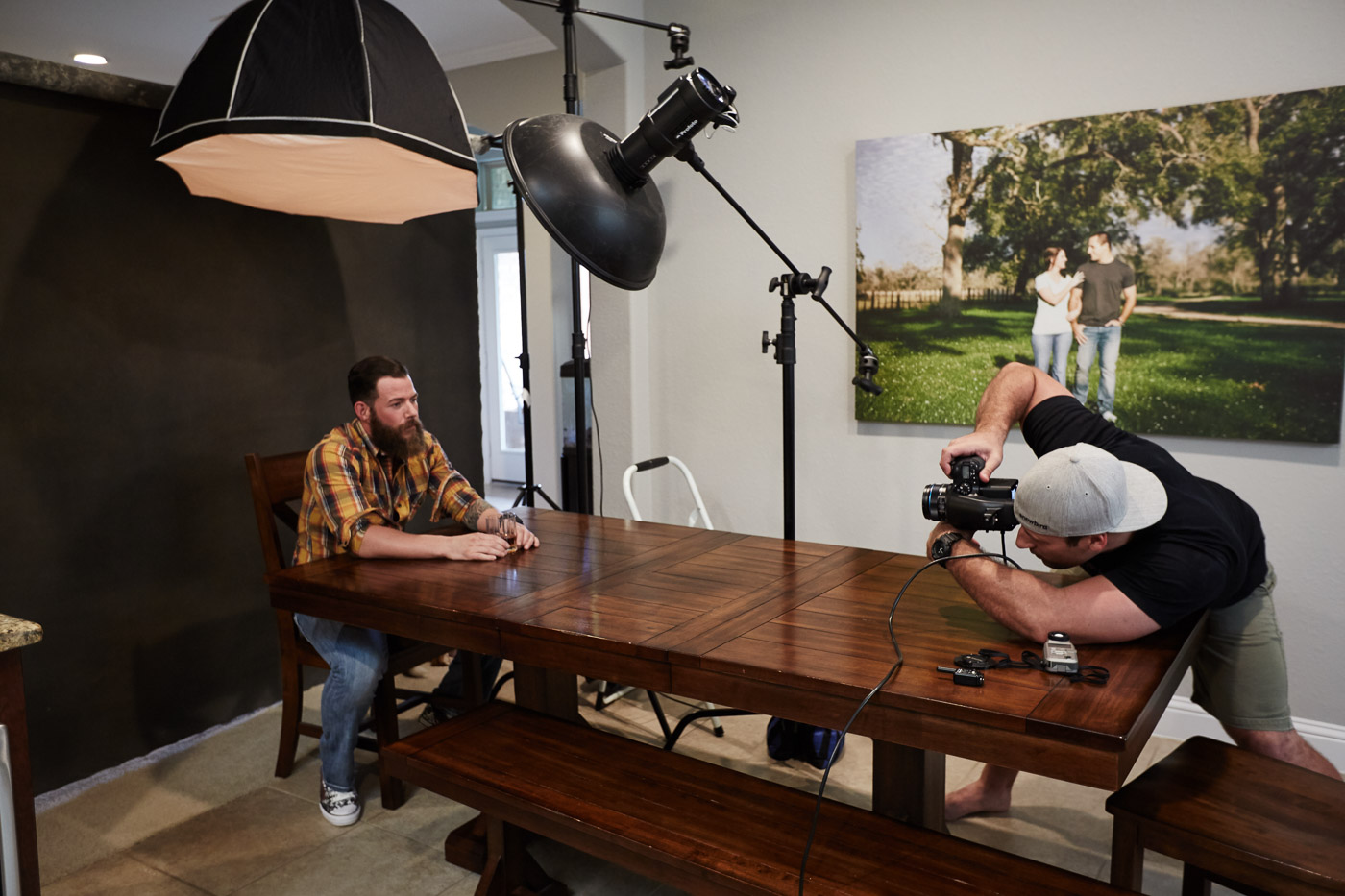 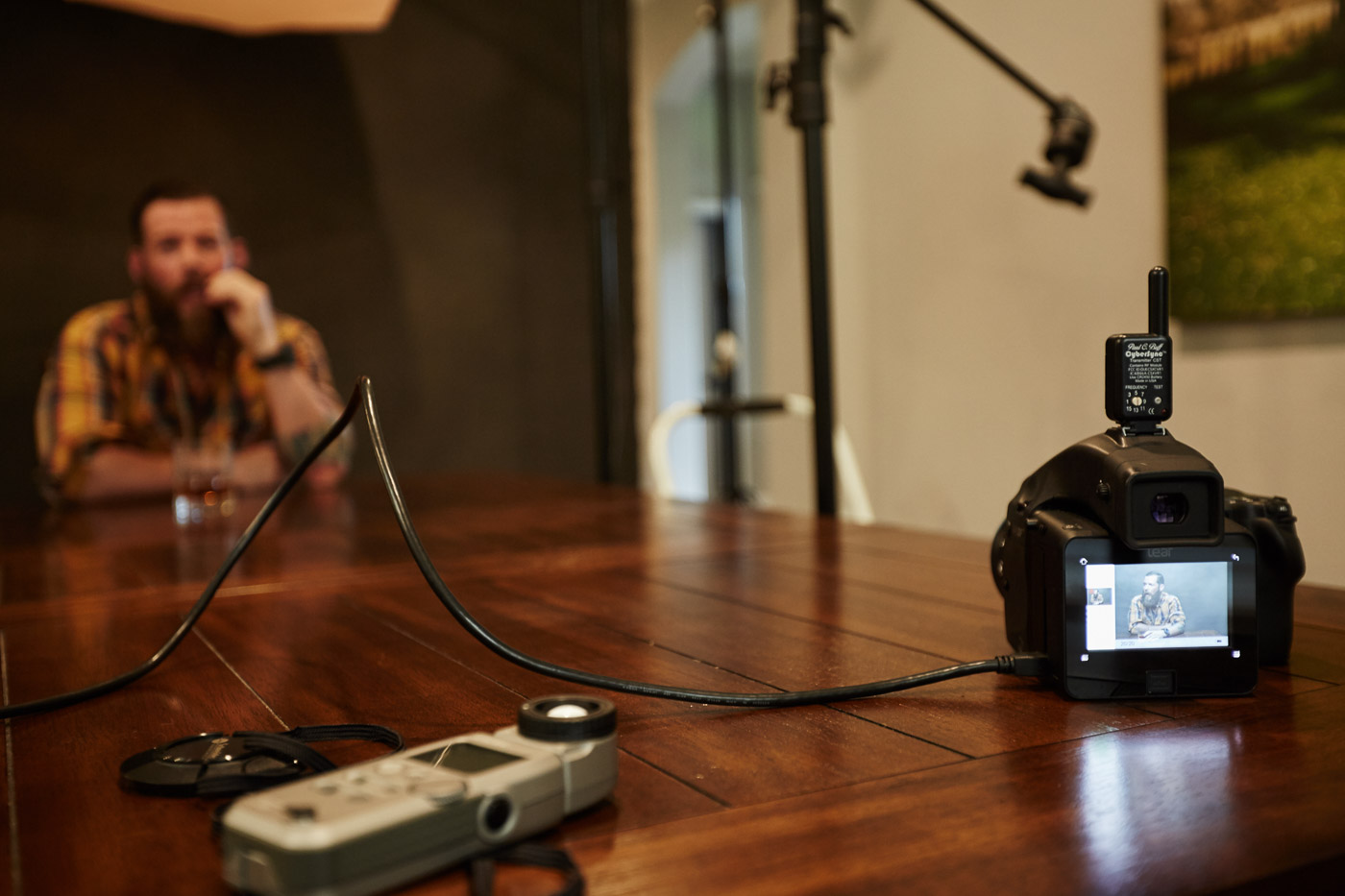 With that in mind, I was at the local bar and saw this dude with a really awesome beard and just a general cool look and I had to offer. I waited for him to walk to the end of the bar Sam and I were sitting at and had a card in hand. I explained I was a photographer, that I thought he had a cool look, and I’d love to shoot his portrait sometime if he was interested. I’m sure there was a moment of confusion/creepiness in the moment, but he rolled with it and we ended up setting up a shoot a few months later. 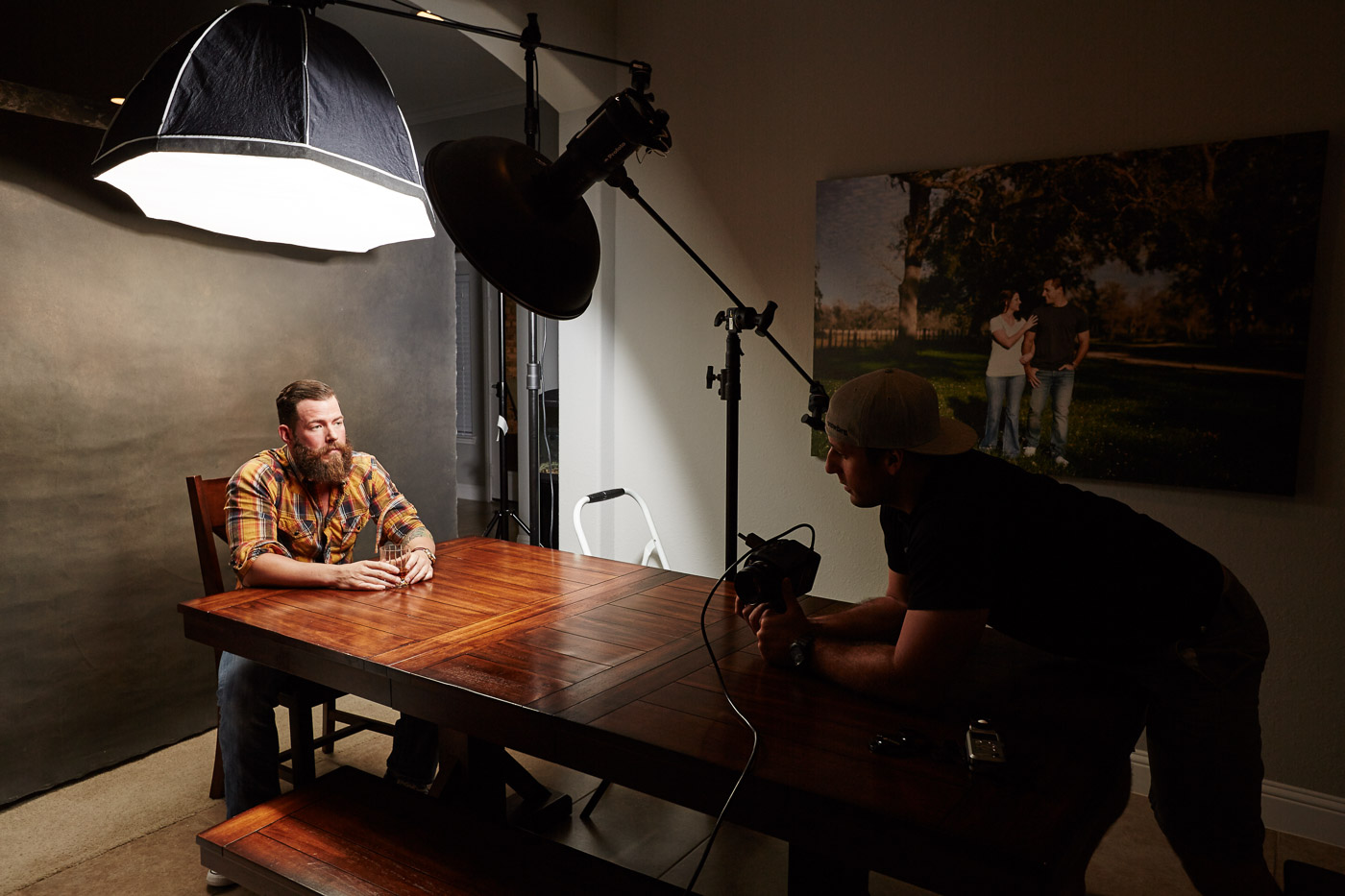 So that sets up the background for this shoot and hopefully helps give a few of you a great idea of how to approach somebody and expand your portfolio (no to mention work on your cold-calling technique for business because that’s essentially what you’re doing. Putting yourself out there and hoping for the best.). The next thing to do was actually plan the shoot out and make it happen. Maybe it was because I saw him as a bartender, but I really loved the idea of just shooting him with a glass of amber whiskey, sitting on a cool wooden table, and having the simple Oliphant backdrop behind him. With that setting being something I could do at our house pretty simply, I just had to determine how to light him and the general clothing look I wanted. Something rugged and a lighting set up to reflect the same thing. 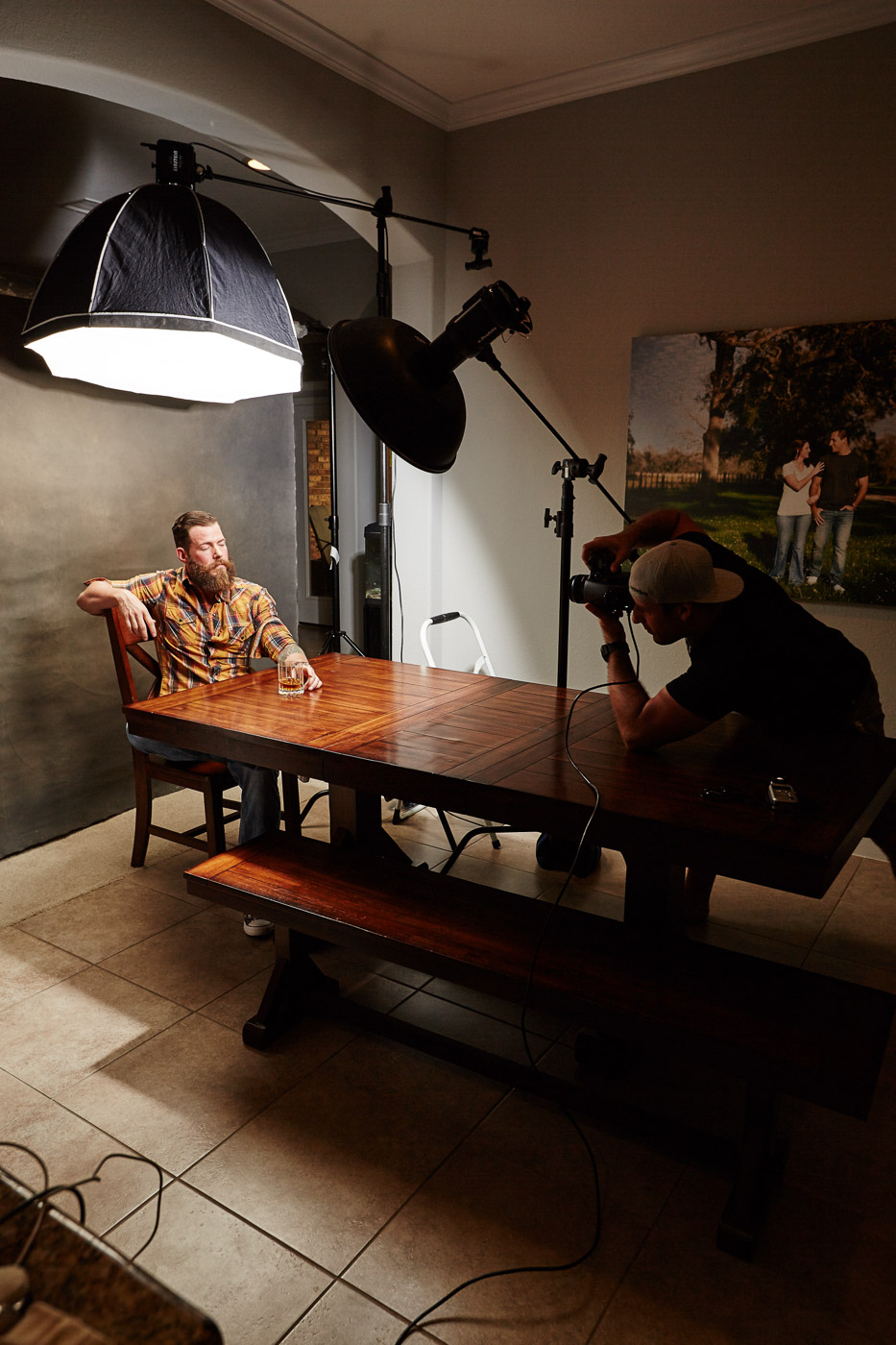 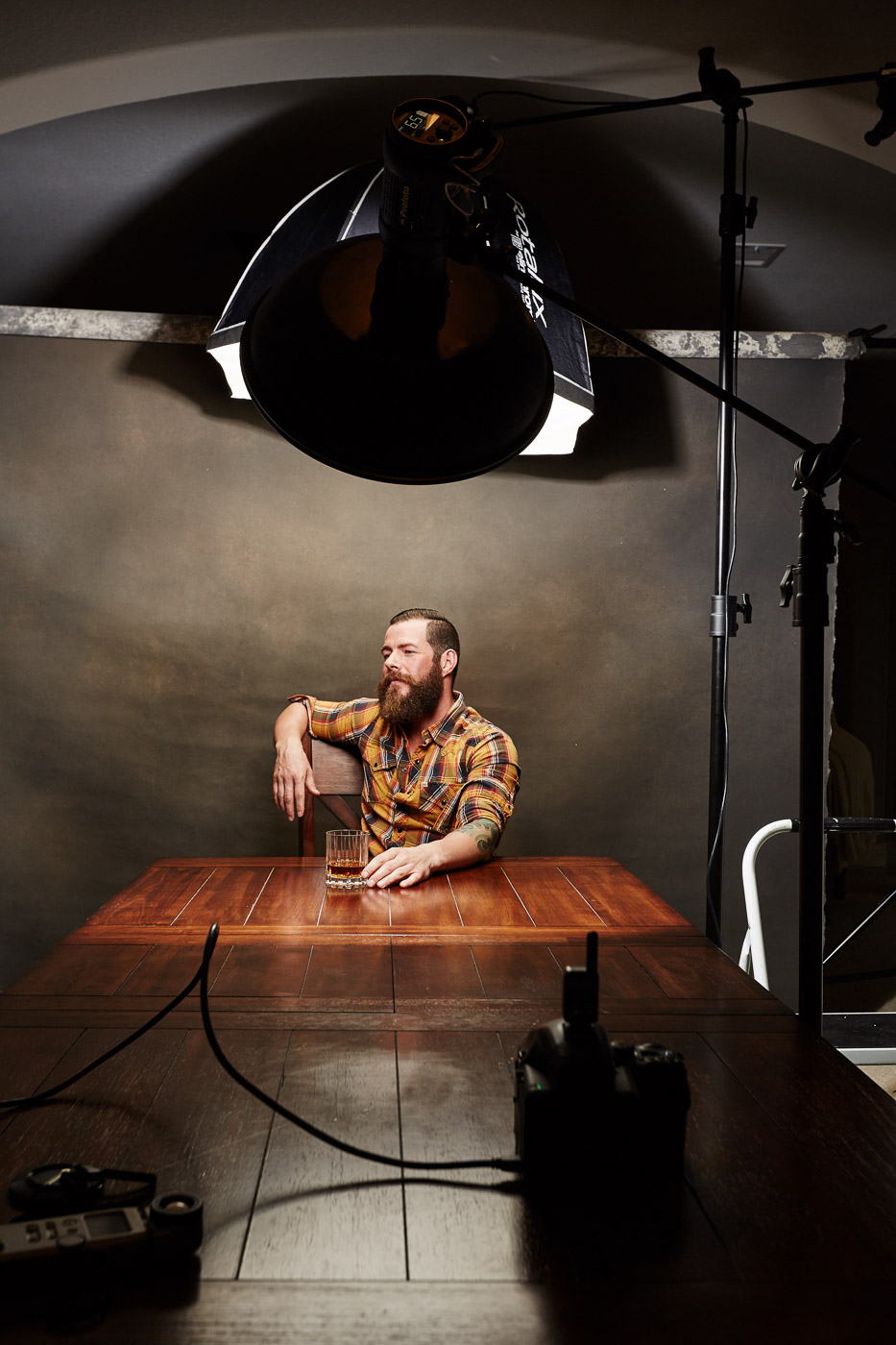 I have been really studying and interested in playing with more overhead lighting lately, so I immediately wanted to throw the smaller Elinchrom Rotalux octa above his head for some nice overhead light with a good diffusion. It threw some light onto the backdrop and acted as a separation and a hair light which was a nice start to the set up. From there, I went to my go-to: a White Profoto Beauty Dish as the main light. Keeping everything high helped throw the contrast I wanted onto Matt’s beard and face and create some great depth throughout the image. 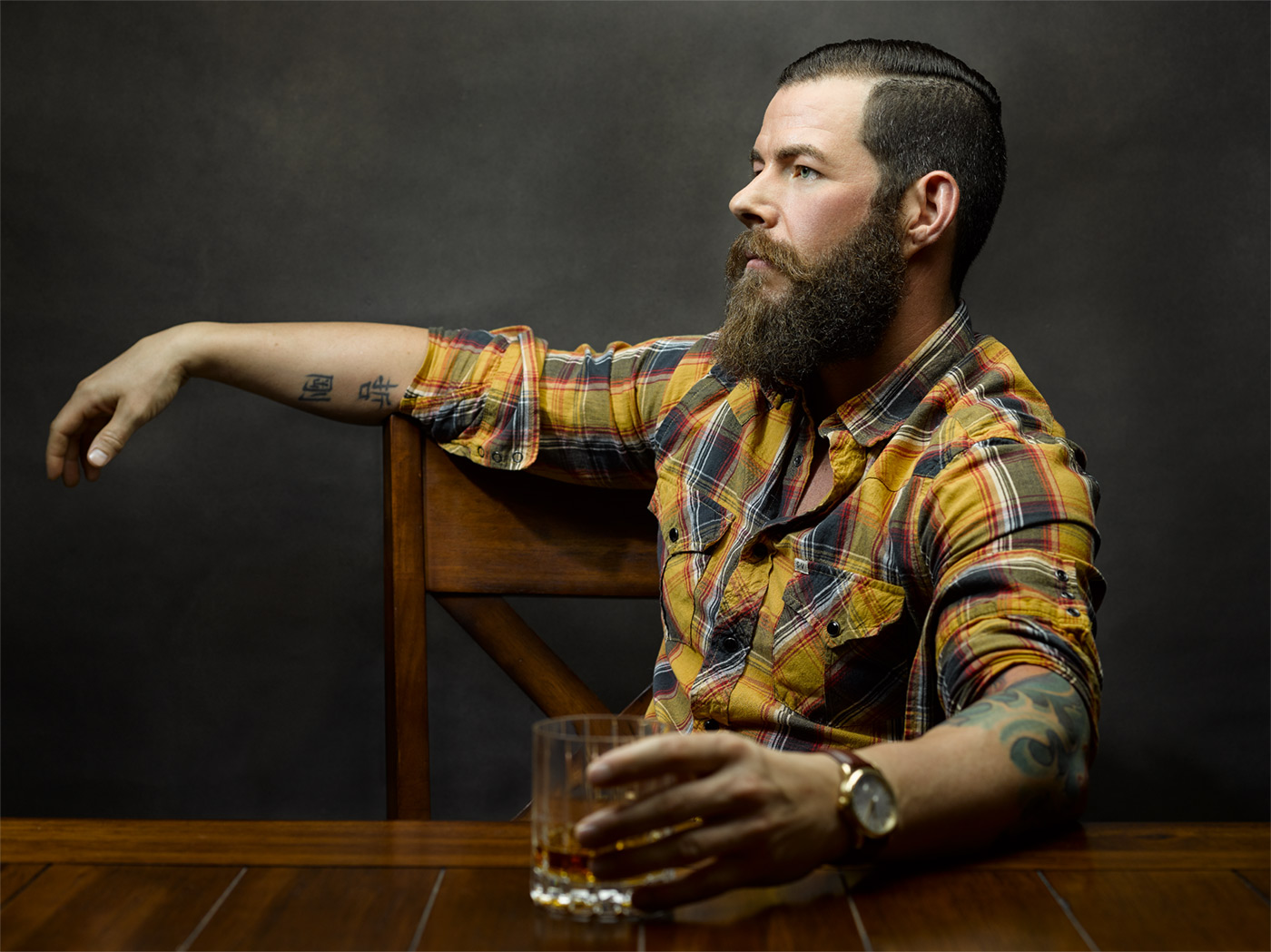 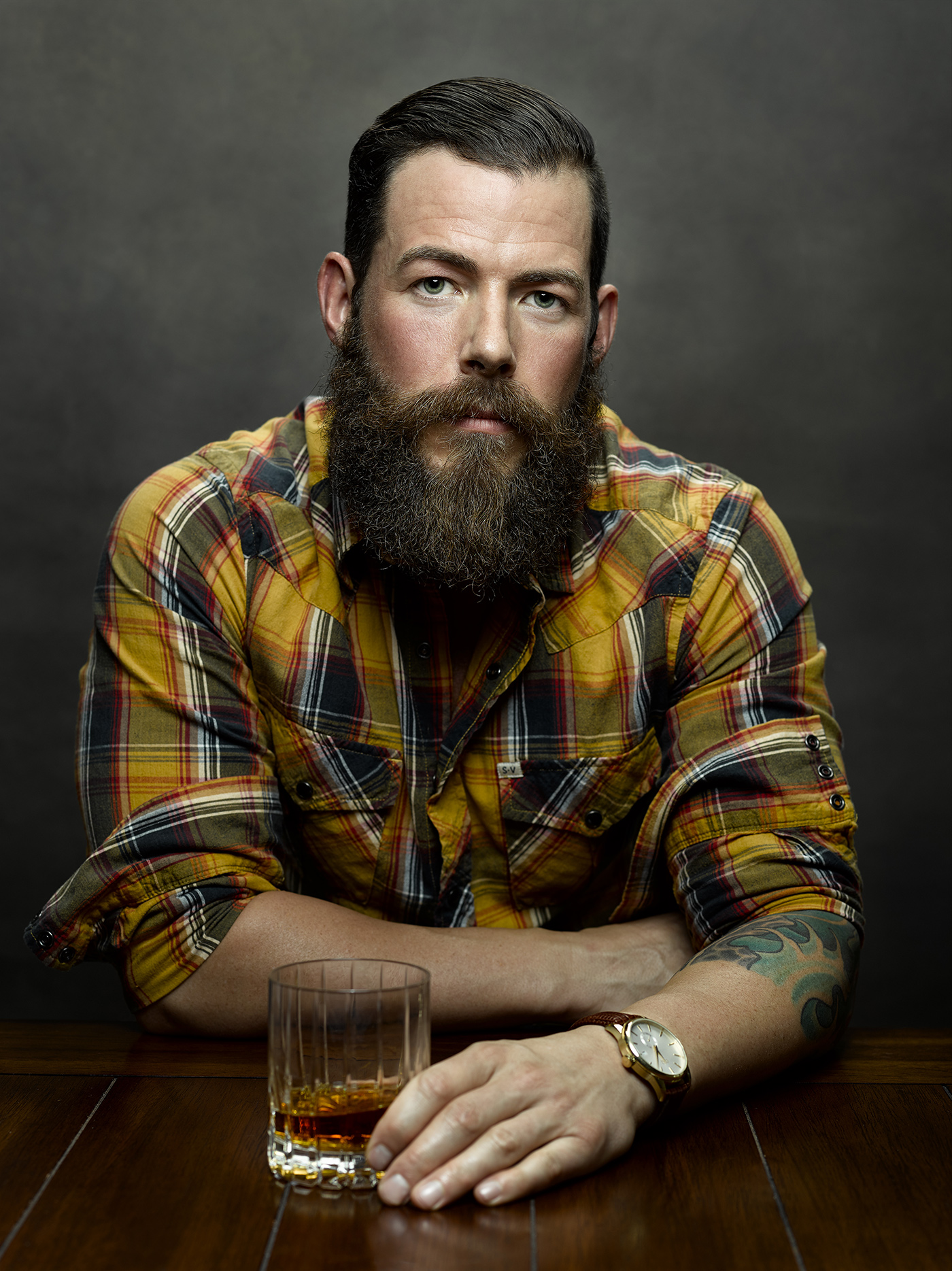 The second setup I actually got from an image I came across on Platon’s Instagram feed. I love his work and have been a fan for a long time, and I recently saw an image he did of Daniel Craig where he was below the eye-line and shooting upwards at the actor. I was immediately pulled by how he broke the rules and how awesome and unexpected the camera position was. For Matt’s face structure and beard I thought it would be perfect, so I set to work creating a very simple setup to make it happen. I took the Large Elinchrom Octabox and used it as the backdrop by blowing out the light behind him, creating a nice, soft, white, wrapping background light that added something to the face. The main light was, again, the White Profoto Beauty Dish. I had my friend Eric (who’s an awesome photographer, you have to be sure to check him out – http://www.ewalleyphotography.com/) assisting for the evening, and he held up a black reflector as close to Matt’s face as he could to help flag some of the light away from one side of his face. We were shooting tethered straight into the computer all night, so I had a black and white conversion already applied in Capture One and we were all immediately pumped with the result. It was an awesome way to end the evening, and gave me a drastic contrast to the first image which was perfect for what I wanted. 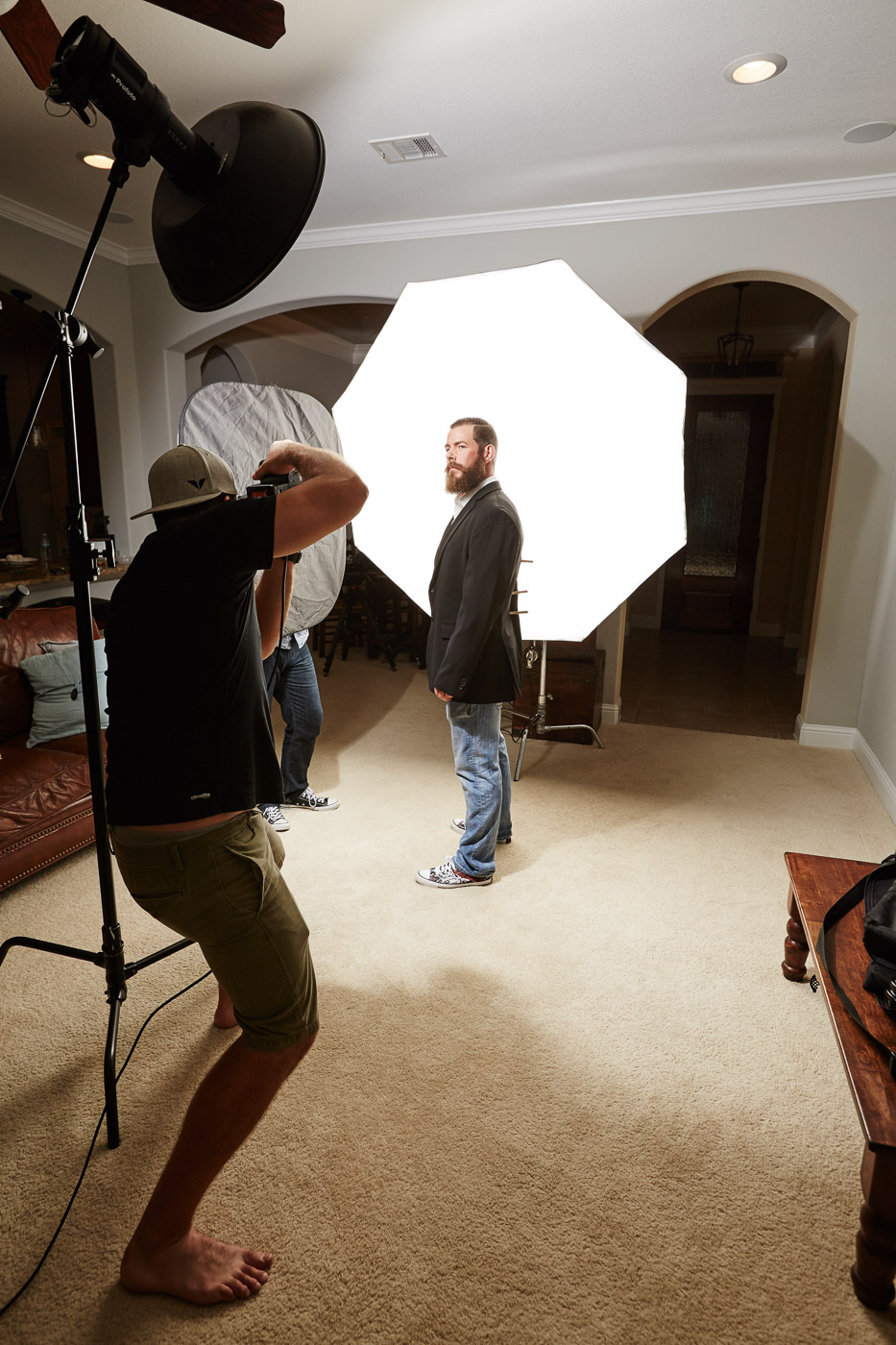 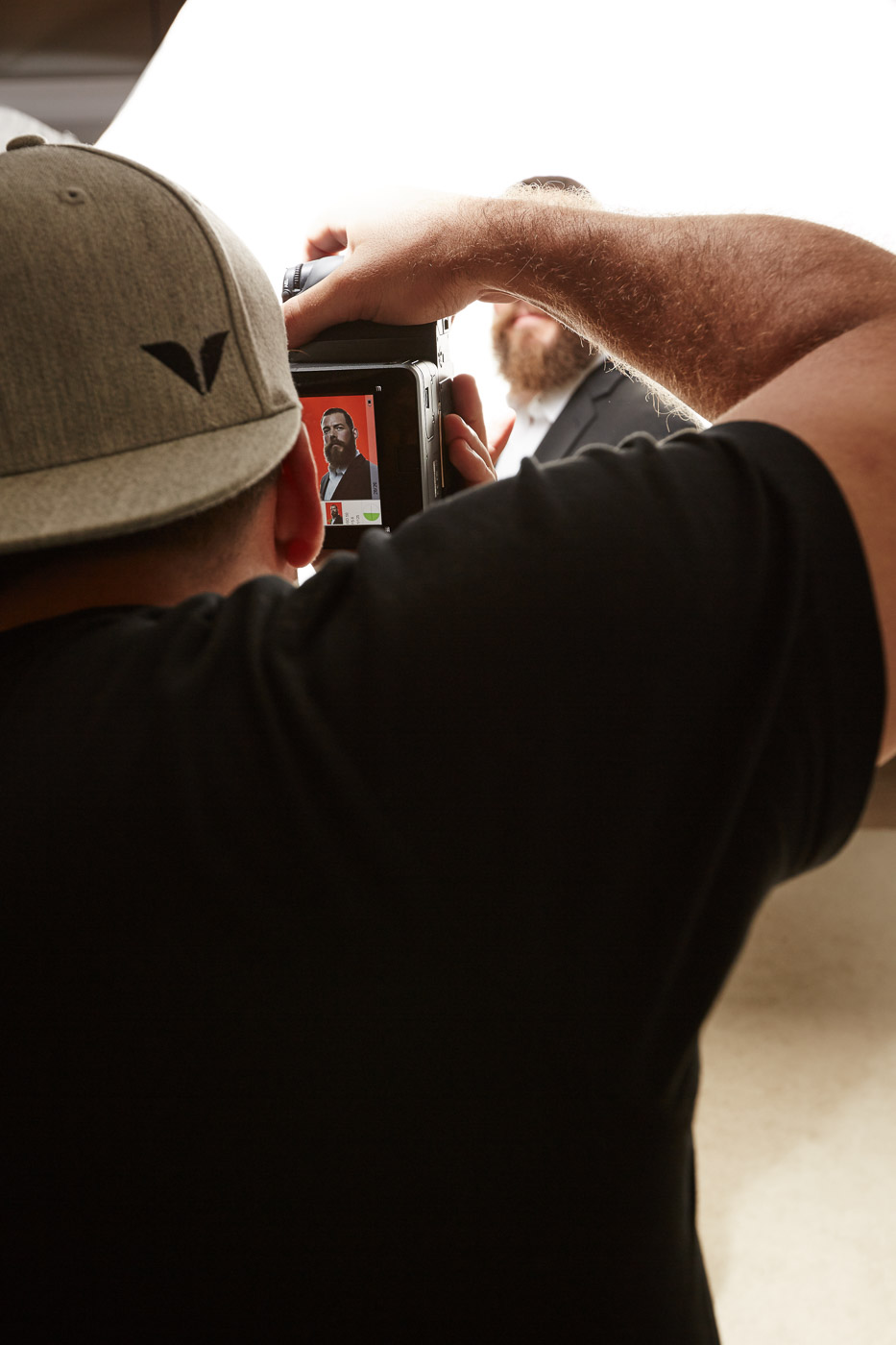 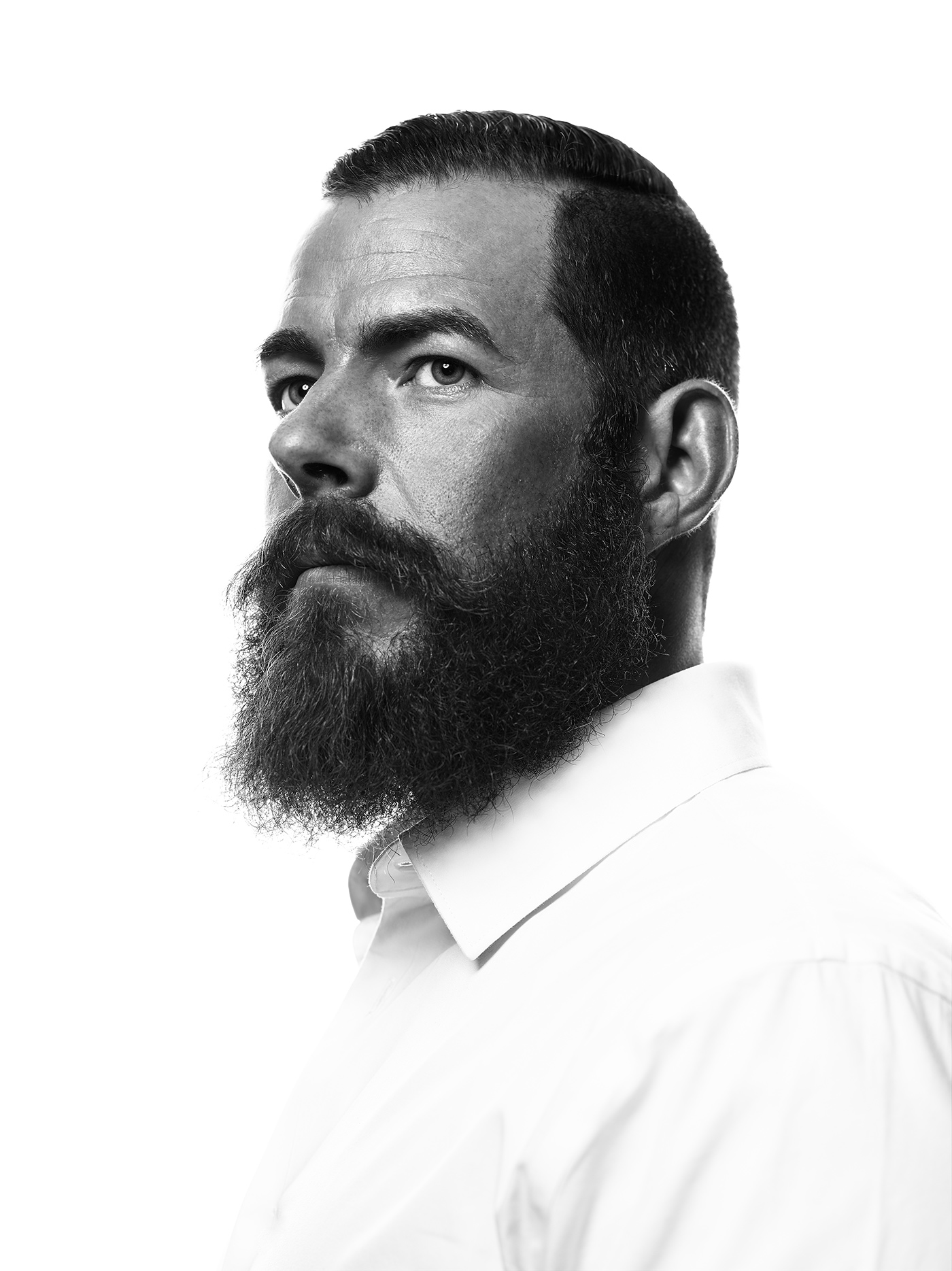 So, moral of the story? Always carry a business card, be prepared to put yourself out there, and enjoy creating pictures of people that interest you. Make connections, have some fun, and maybe even enjoy a glass of whiskey or two.

Lastly, a huge shout out to Eric again for helping out. Thank you for coming and lending another set of creative eyes on the project! And thank you to Nikki Bartlett (http://www.blushingbeautybynikki.com/) for the unexpected and AMAZING Make Up artistry you brought. That was such an awesome surprise and I can’t wait to work together again soon!