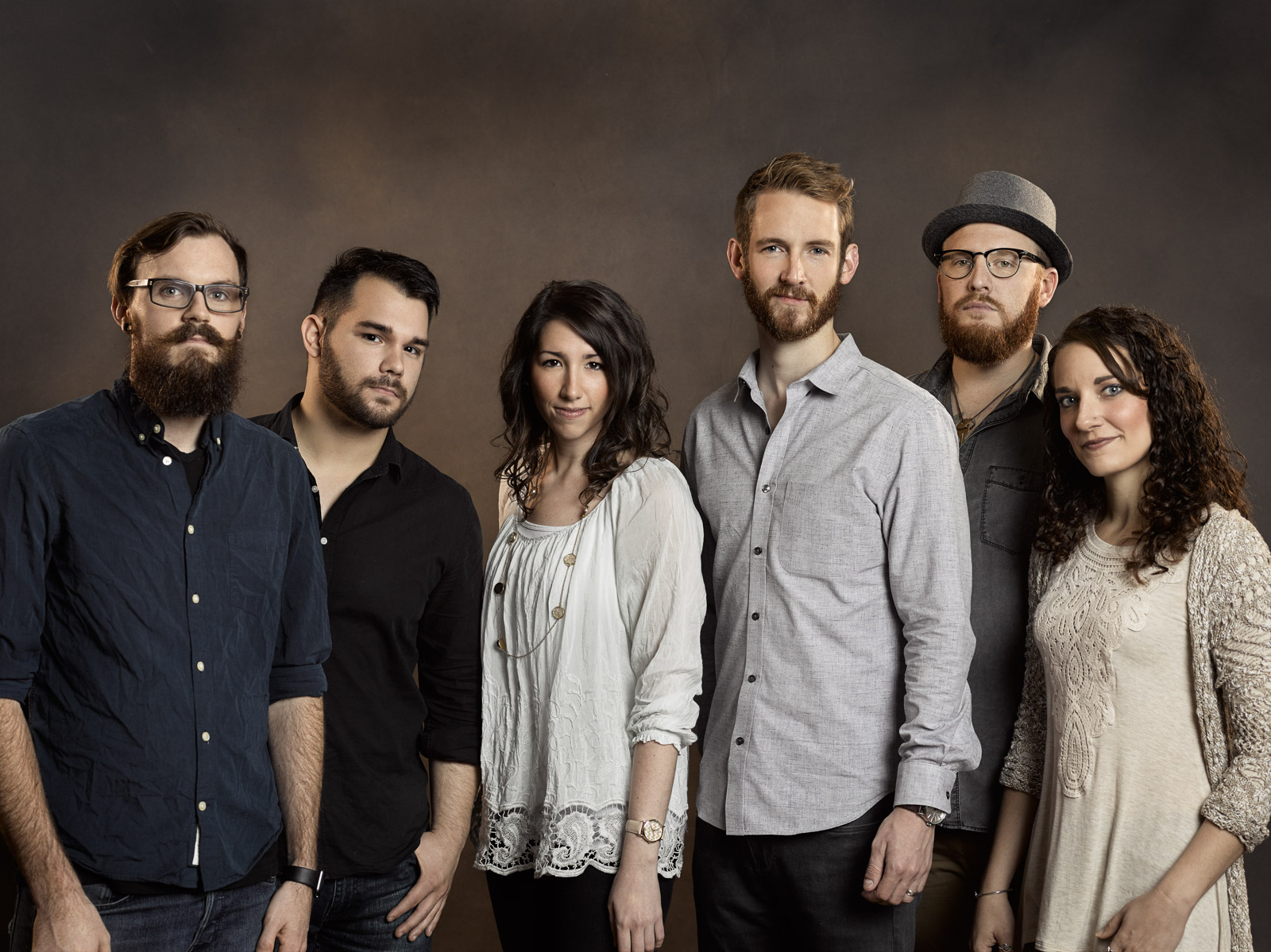 Finally! Some new work to put up amiright?

Seriously though, I know it’s been a little while, but more on what’s going with Ruddock Visuals and some insights into our busy schedule to come next week so stay tuned, but for right now, here’s some new work with an AWESOME group located here in Houston – The Homestead.

We actually hooked up with these guys through our local church – Covenant United Methodist – here in The Woodlands, TX. The lead vocalists for group are also the leaders of our worship band and they are phenomenal musicians. After hearing them the first time we were enthralled with their voices and style, and as we got to know them better we became more and more excited about working with them for some shots of the band that they could use for their promotional work. We put some serious thought into it and tried to find a way that we could incorporate their style in a studio setting. Of course we got them back in The Houston Studio – one of my favorite places in Houston to work – and this time I brought out the big guns: A Phase One camera!

I’ve been looking at Medium Format for years and I finally decided to start making the move and trying out the Phase One DF+ camera with the Mamiya Leaf Credo40 back. The awesome people at Digital Transitions hooked me up with the one I used for their shoot and the detail and tonality in the imagery was absolutely breathtaking. I was (read: still am) geeking out over the detail in the images the entire time I was editing. Amazing cameras and I can’t wait to get my hands on one of my own here shortly, but I digress…

On to the meat of the shoot. I knew we needed to get some group shots as well as some shots of them individually. I wanted to get a simple, standing group shot of the band as well as a shot of them with their instruments. The instrument shot was absolutely key though because they have such a wide variety of strings, and the harmonium is such a unique instrument that I really wanted to be sure to get it included in the character of the band. 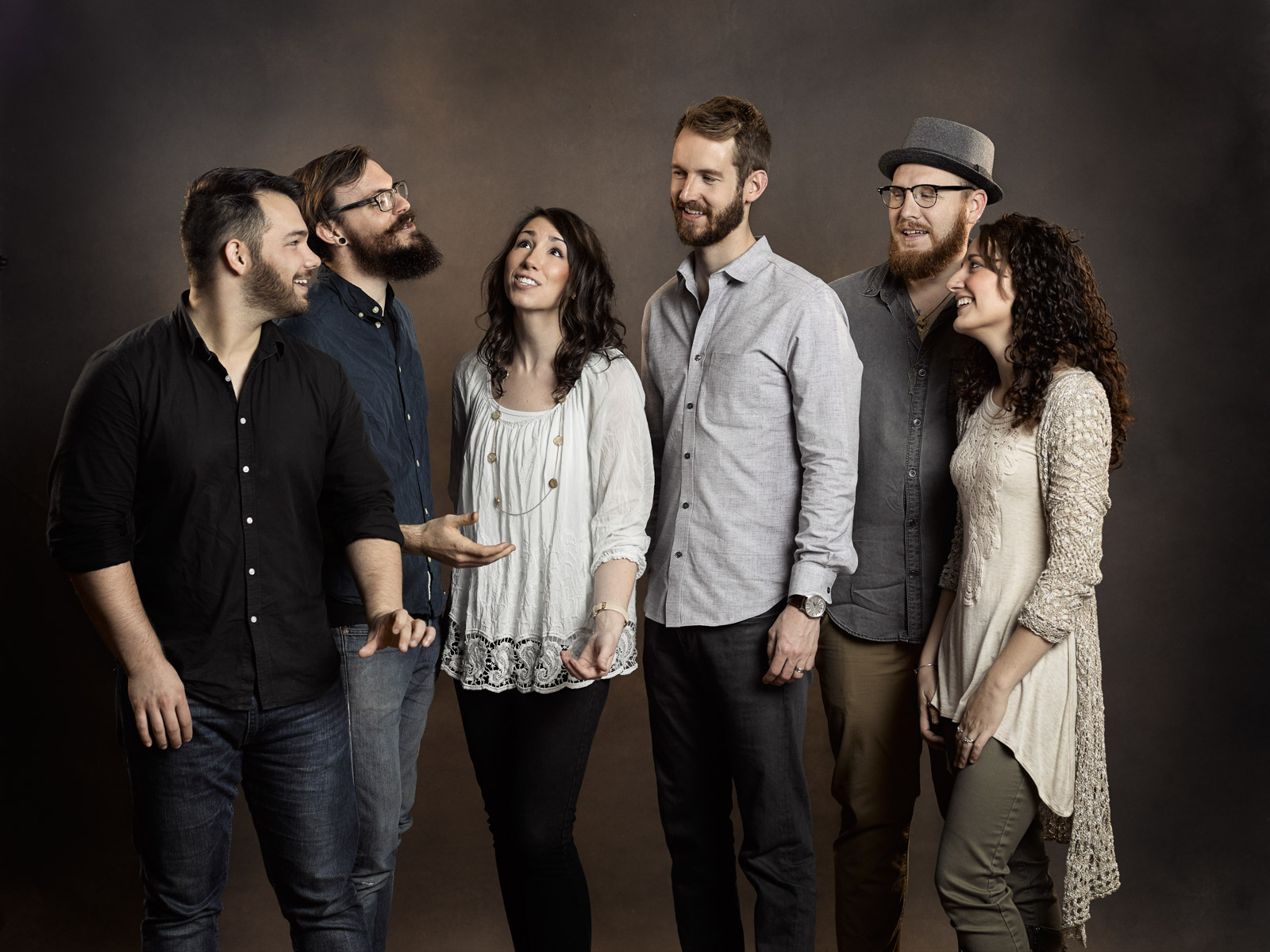 We started with the group shots because I always feel like keeping people together in a group puts them a little more at ease before pulling them off individually and shooting while the others look on both at them as well as checking them out on the screen we’re tethered to. We shot the first group shots in front of the Oliphant backdrop and I played around with the framing to show the entirety of the backdrop as well as a more cropped version of the photos. They also have such inviting personalities that I was sure to get some shots of them just hanging out too. Put at ease, they delivered immediately and I knew it was exactly how I wanted to start the shoot and it would only get better from there.

The lighting was a simple setup with a large Rotalux Octabox to camera right and two beauty dishes to hit the group from either side with rim light. I threw a 1/2 CTO gel over the two rim lights to add a bit of warmth into the image, and stopped them down about 2/3 of a stop below the exposure of the main light. 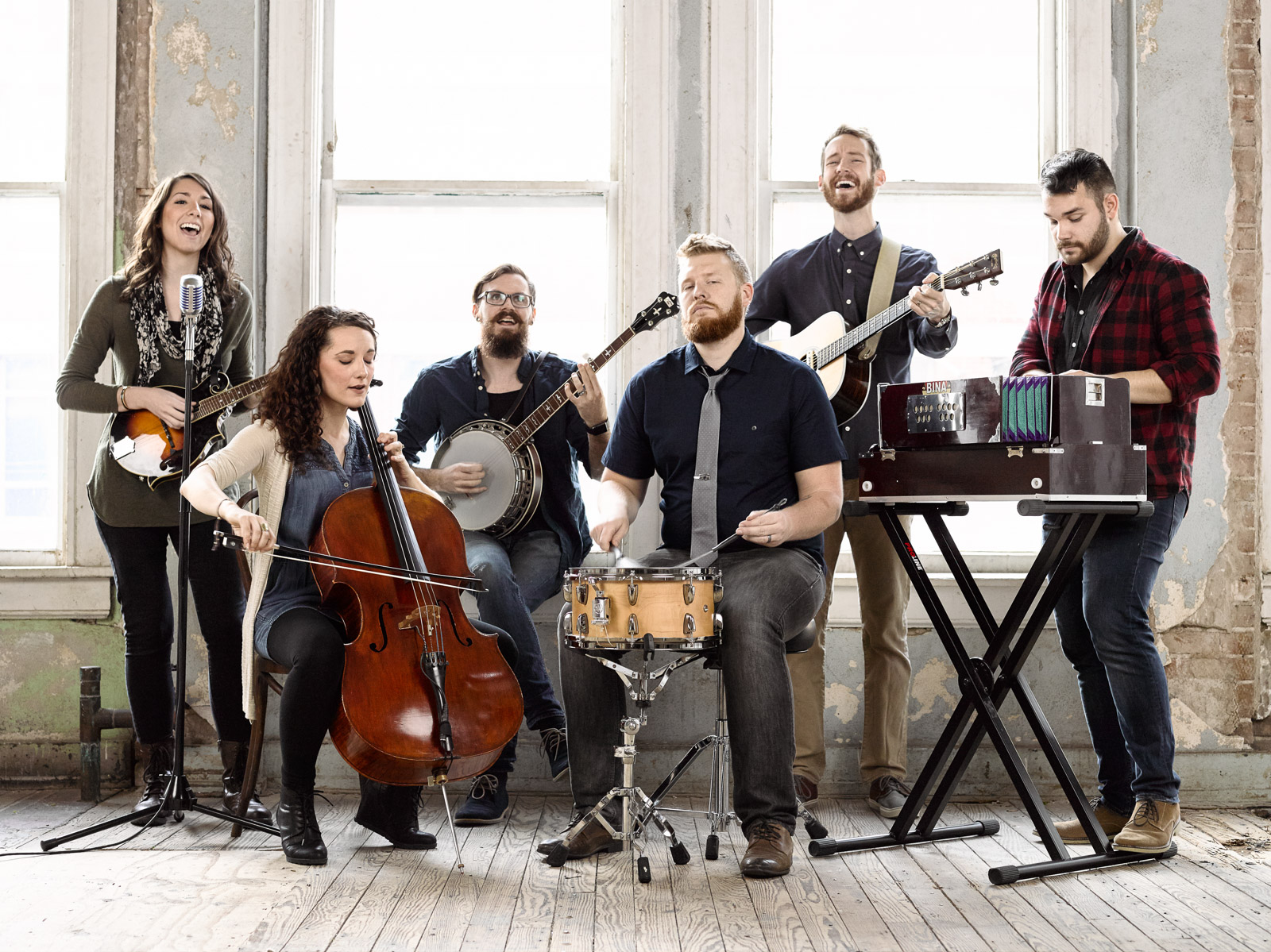 After that, we grabbed the instruments and headed into the other studio. I did this intentionally because I was going to have to move the lights with me, and I knew it would take them a little time to grab their instruments and get ready while I was getting ready myself. These shots were a little trickier because the band was going to be spread out a bit more and positioned at different depths and focal points. What was interesting though was that the shot took on a whole life I never saw coming until Jacob came in with his banjo, sat down in one of the windows, and started playing a little bit. As soon as I saw him there I started shoving chairs out of the way and the personality of the band came through in a way I couldn’t have imagined before he did that. It was one of those moments in a photoshoot that’s unplanned and makes the entire day for you! 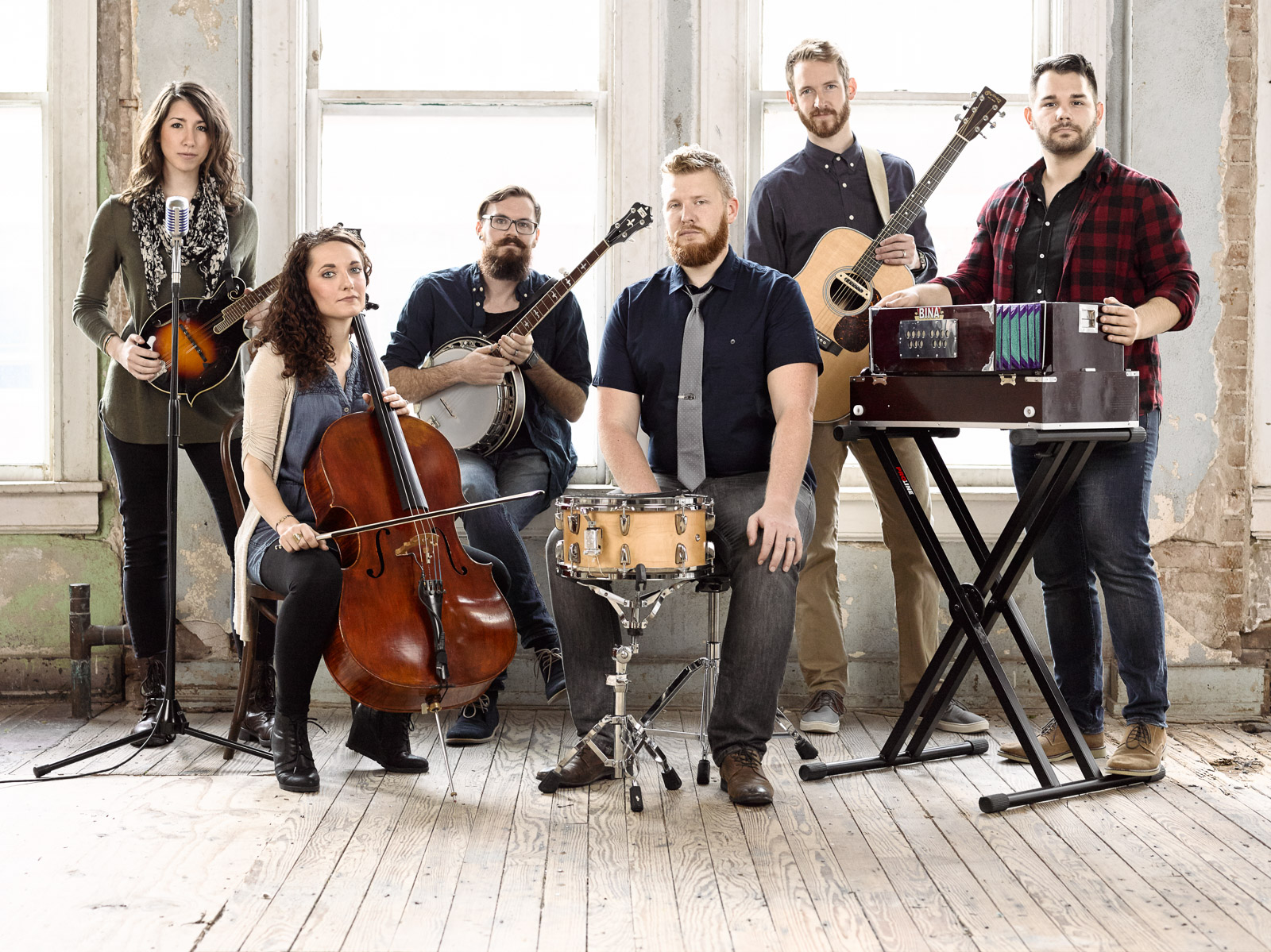 As for the technical side of the shot, I wanted to really blow the windows out behind them, so I pushed the limits of the Phase a little bit which was perfect for my little test run of the system. It delivered in premiere fashion as expected. I opened up for the windows to 800 ISO (about the limit of the DF+) and was running a shutter of 1/50th of a second. I closed my aperture one stop in order to gain a little bit of depth in camera. I let the windows act as my rim lights and filled in with a large octabox to camera right and another, slightly smaller octabox to camera left. That way I didn’t have to worry so much about light dispersion from the large octa and I could create a nice light quality across the entire group.

From there, it was as simple as letting them just jam for a bit and clicking away. I would give some direction now and then to help them stay comfortable but still aware of the camera, and the entire process was extremely organic and a lot fun. I almost just let them keep going until Sam poked me and reminded me we had a time limit (I love listening to great music!). We ended it with a couple of staged shots where they were looking at the camera and that shot ended up being one of my favorite of the day.

With the group shots nailed, we headed back in front of the Oliphant for the individuals. I wanted to try and create two different setups and three different shots for each band member. Two would be very simple just one serious and one funny, and the other was a full body shot that was slightly more complex. 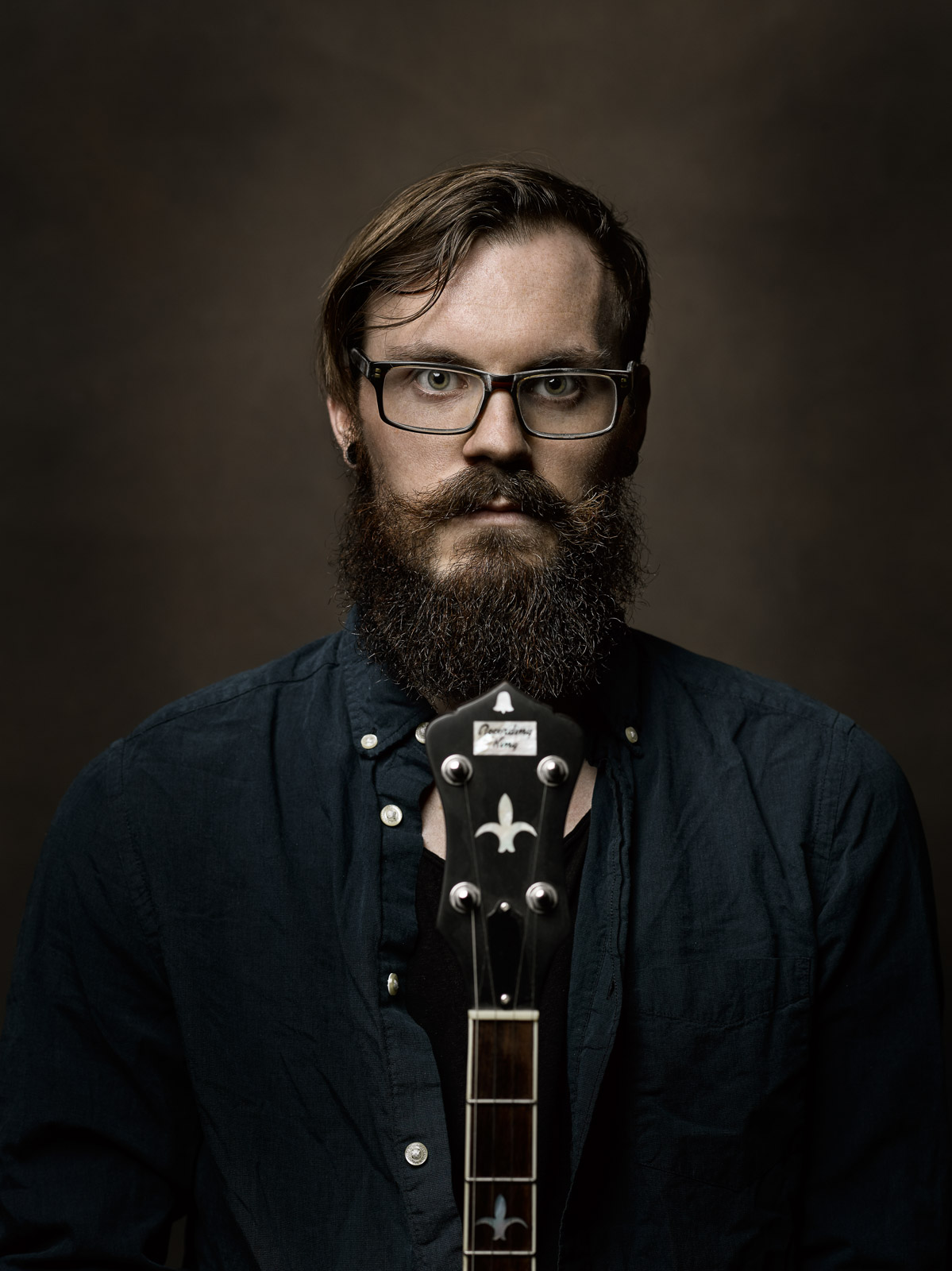 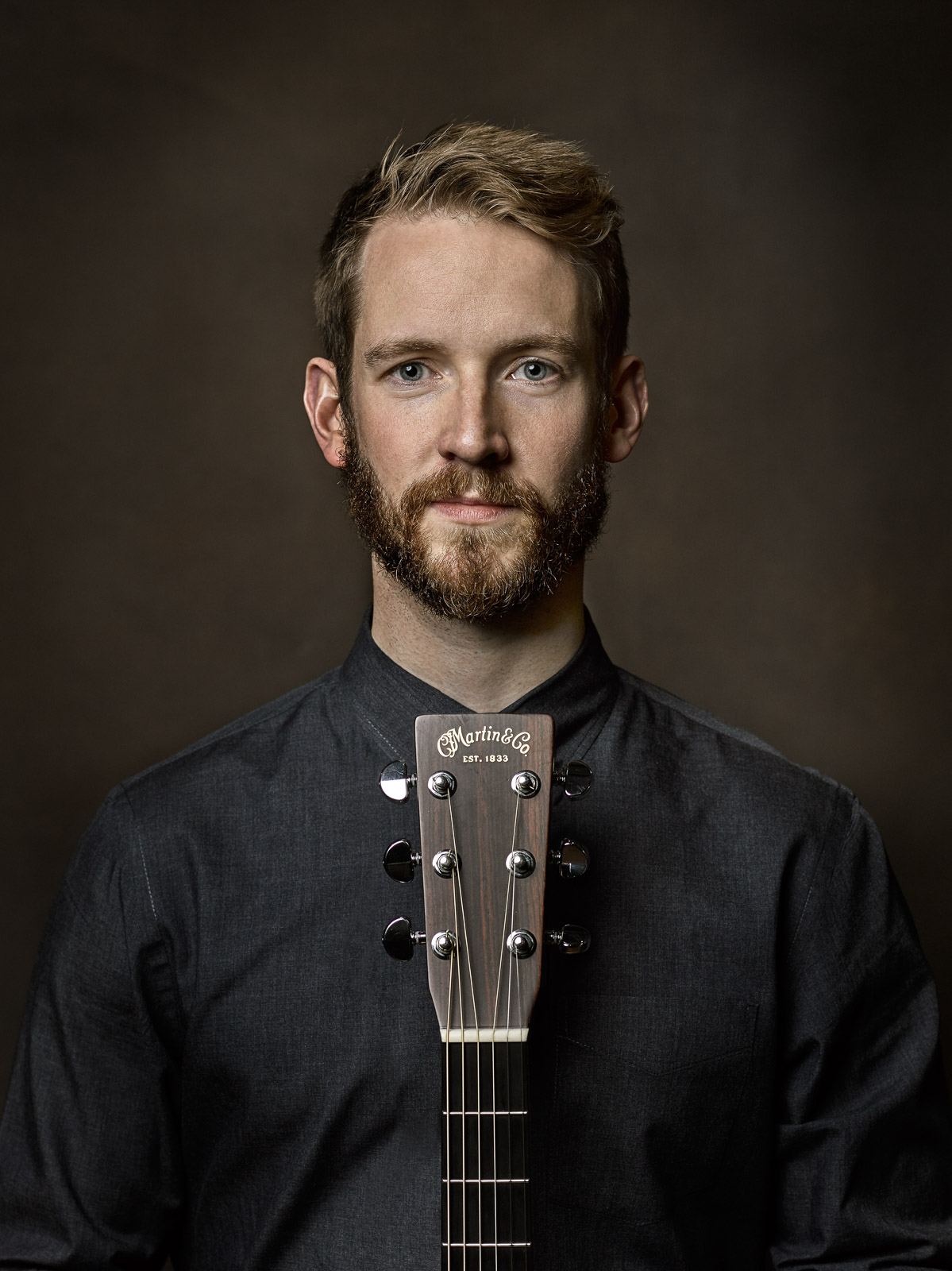 The simple portraits were designed to let the character of the artist speak for itself. Each of them have such awesome features and personality in their faces that I knew that a simple portrait on the Oliphant backdrop would be perfect for their style. Using the smaller Rotalux softbox, I lit them in almost a beauty light setup with a gridded beauty dish splashing a little light behind them on the backdrop. We were sure to do some serious portraits and some not-so-serious portraits. The mood in the images was awesome and they were all such a pleasure to shoot that I had to stop myself because I knew we had the shots but its hard to not keep shooting when you’re continuing to get great frames! With those in the bag and the group shots nailed, it was time for the full body shots and the part of the shoot that I knew I was going to have to sell a bit more by showing them what I had envisioned in camera. 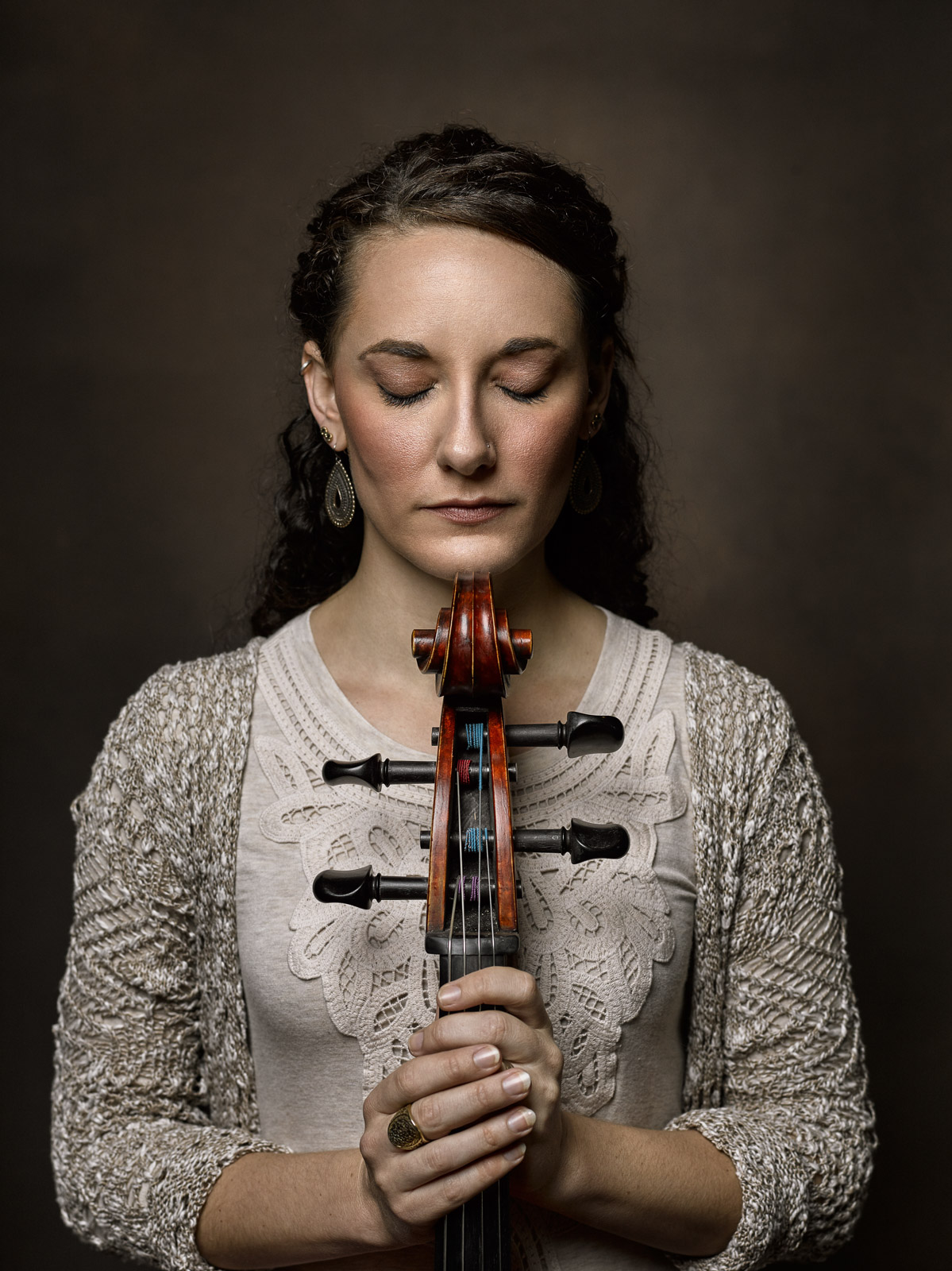 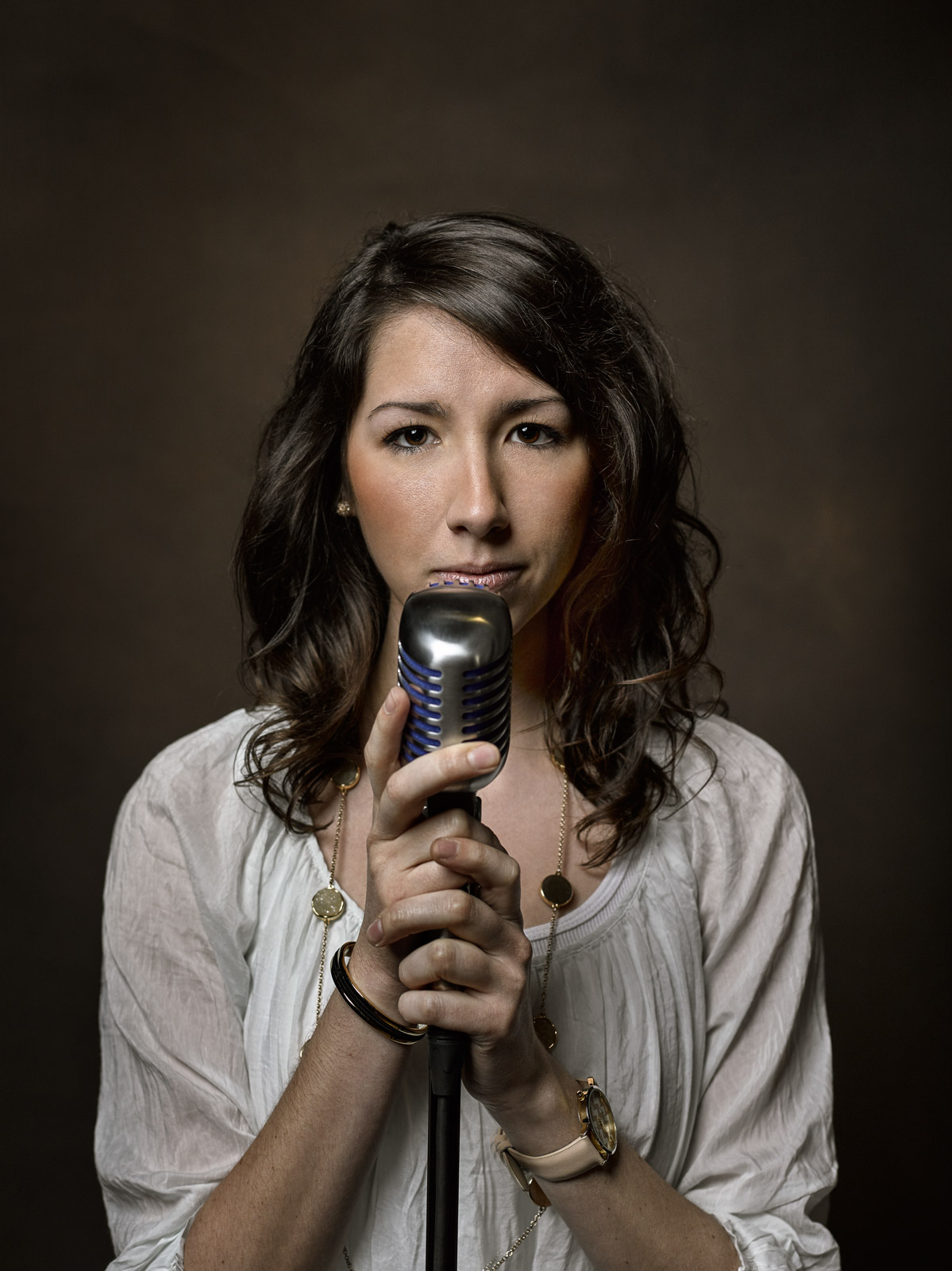 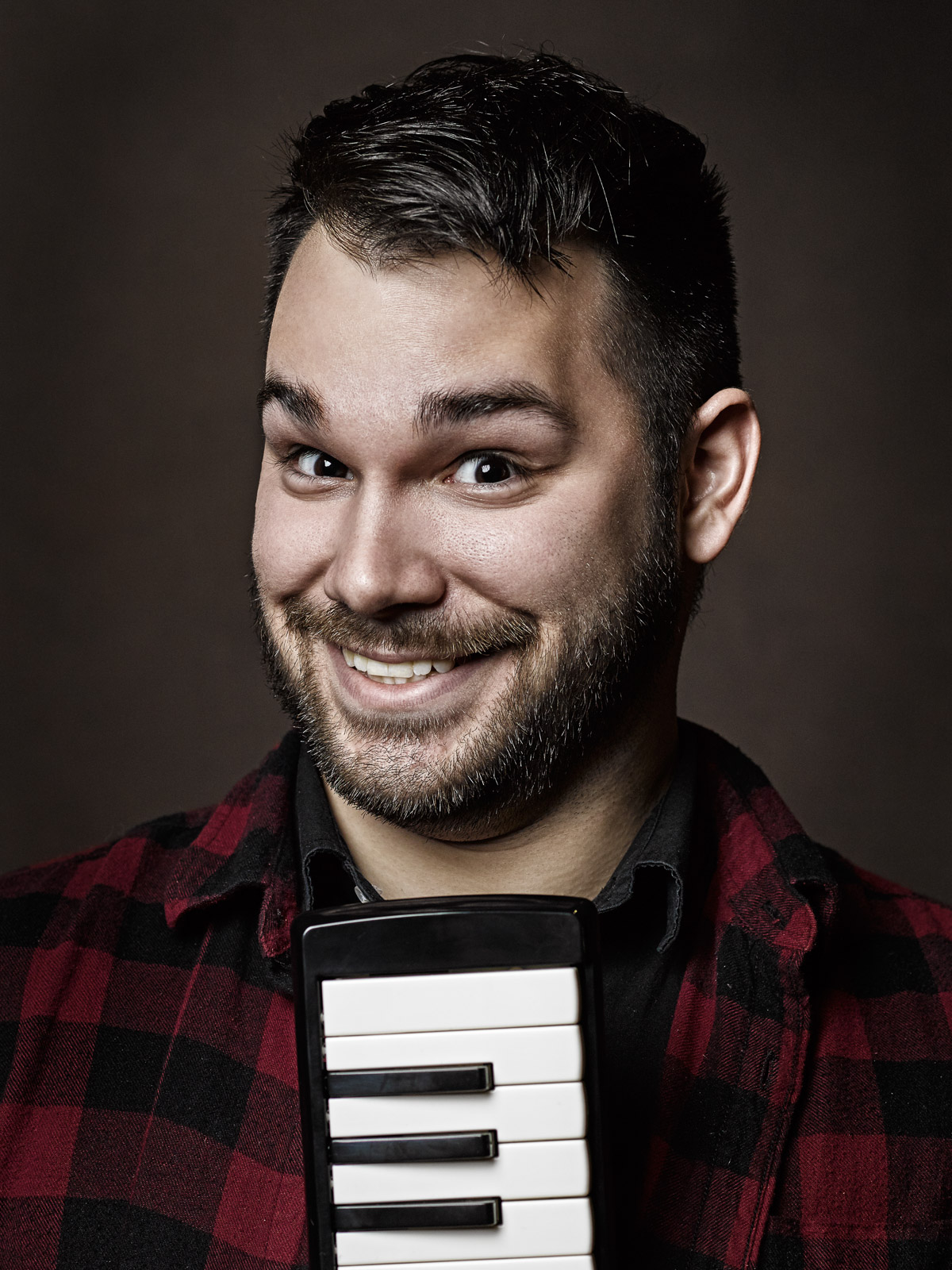 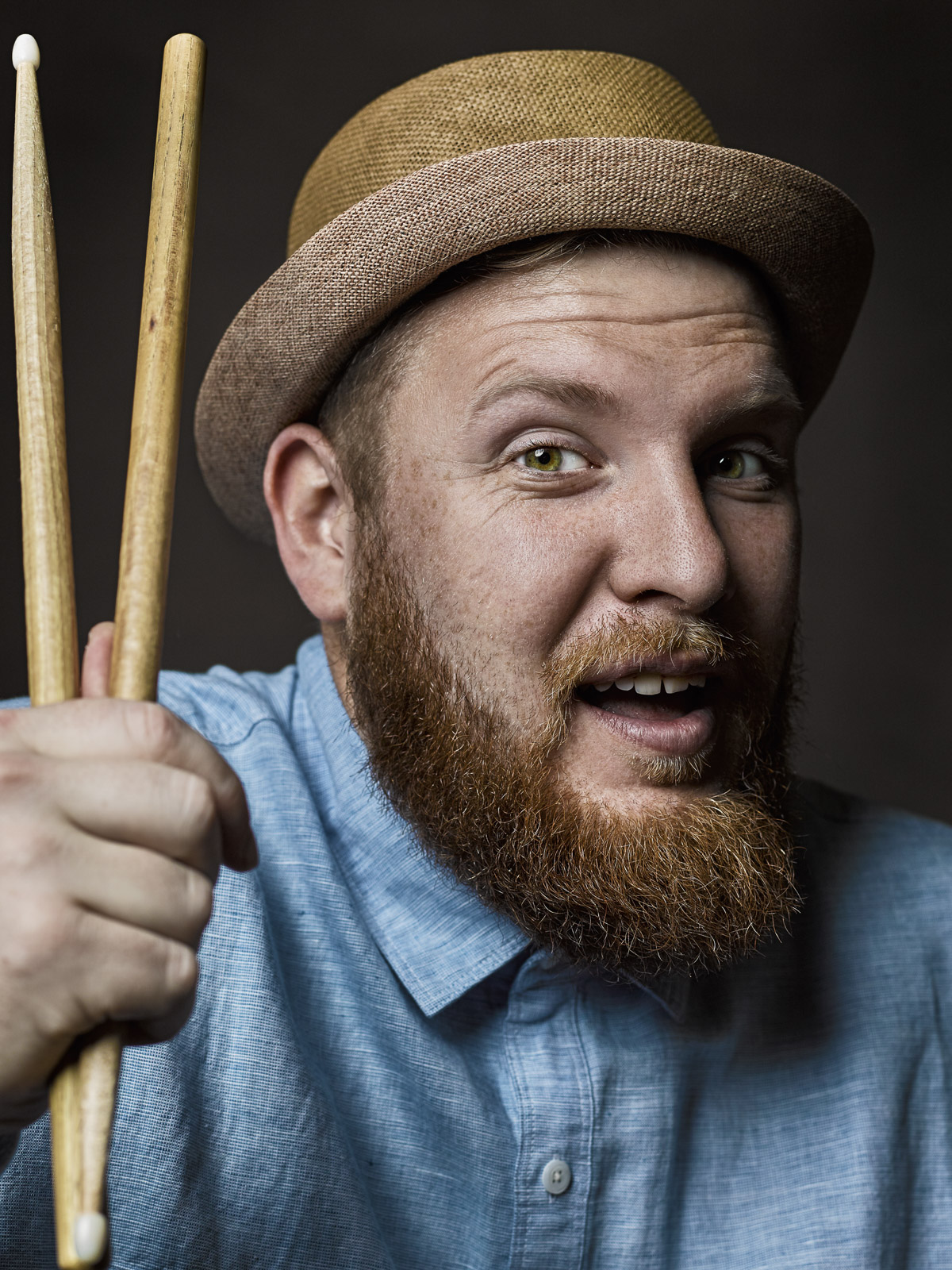 For the full body shot, we brought it an old stool for each person to sit on and play their instrument. The different part was that I wanted something that said “folk band” a little more than just a studio backdrop. So, after a little playing around and a lot (A LOT!) of splinters, I was able to use some grasses that I bought at Hobby Lobby to create some depth and interest in the photos. It gave them just a bit of staged environment into the photos and my franken-grass creations came to life in an interesting fashion that gave them something different to use from what we had on just the backdrop. 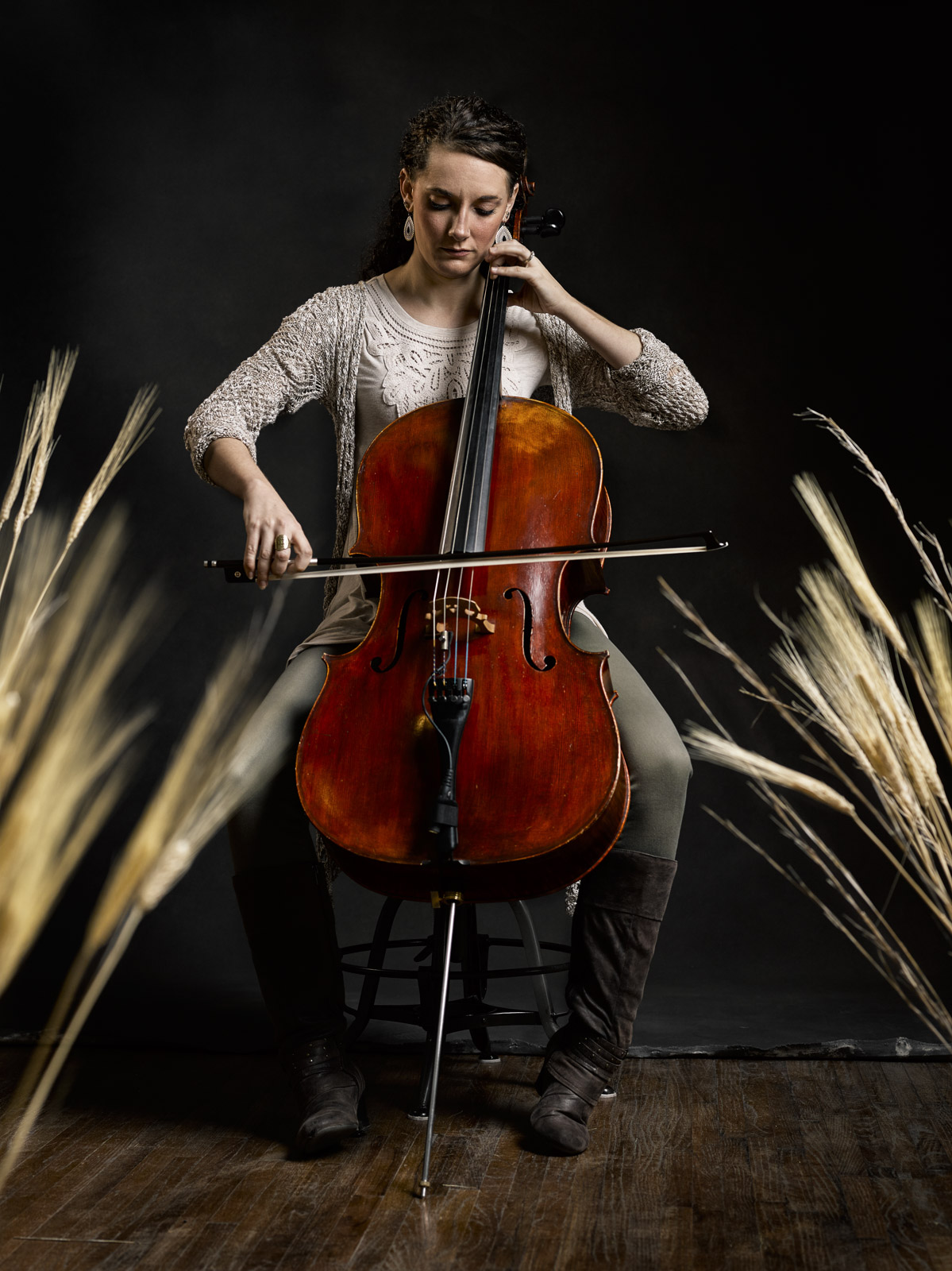 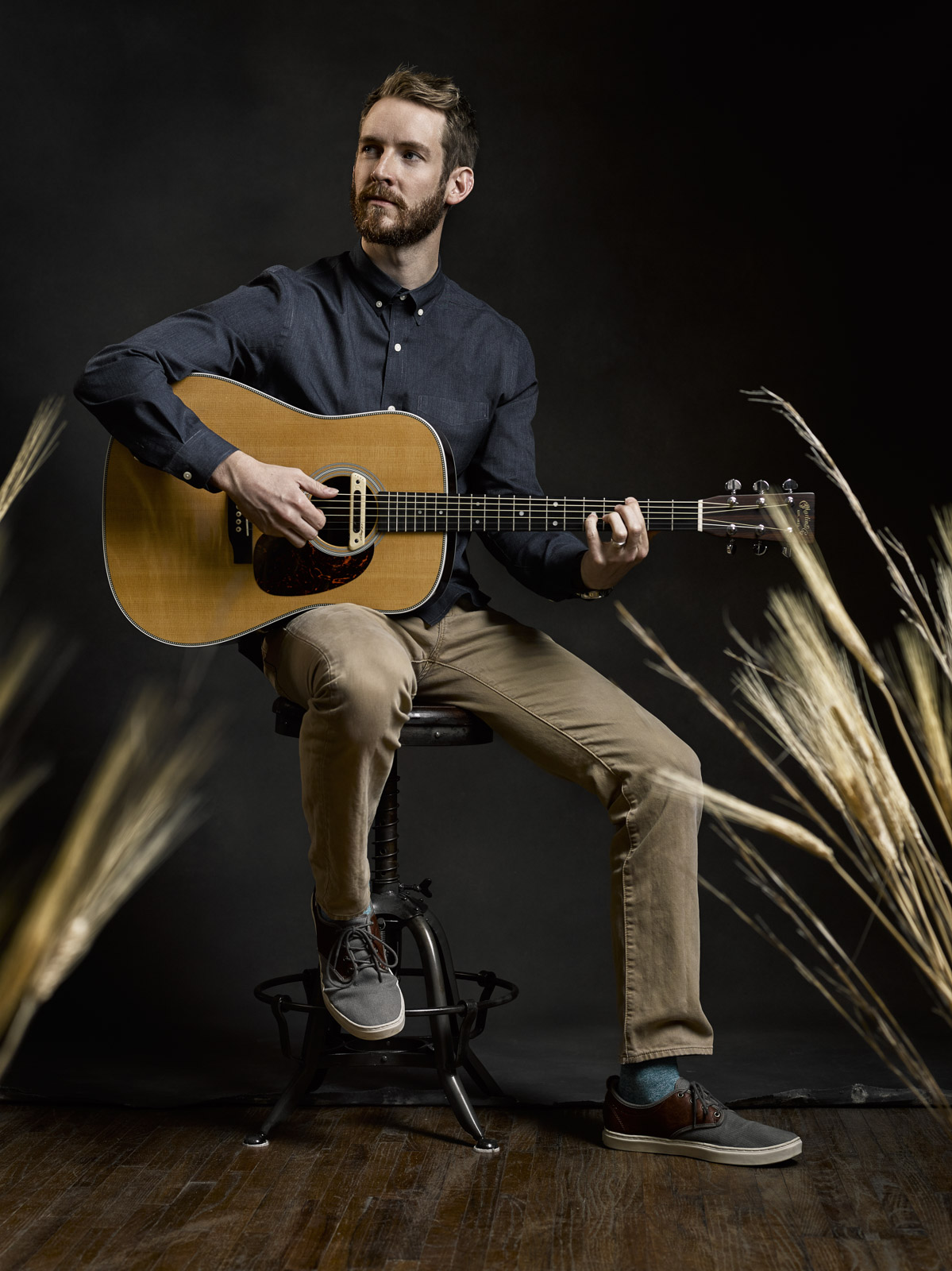 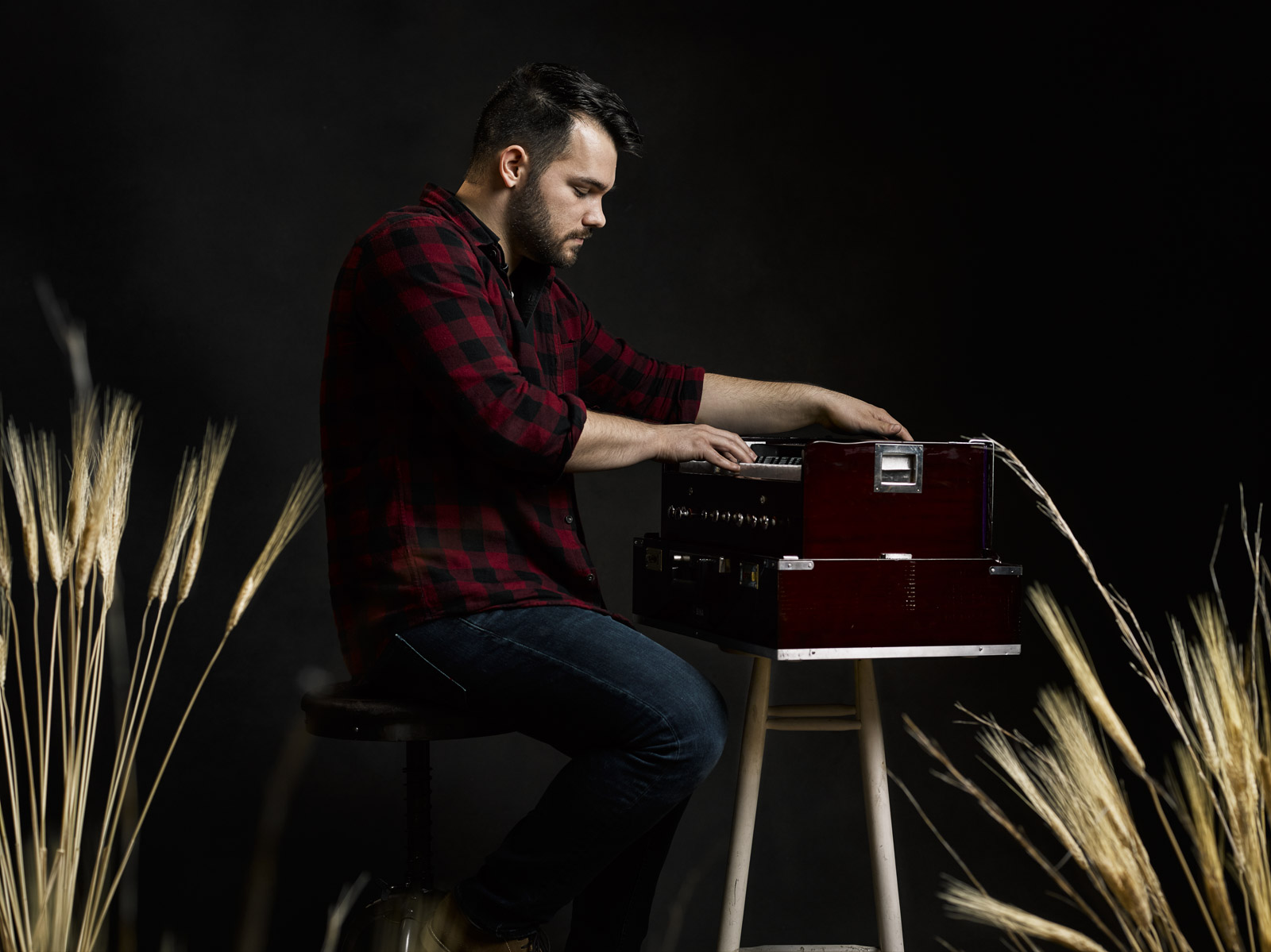 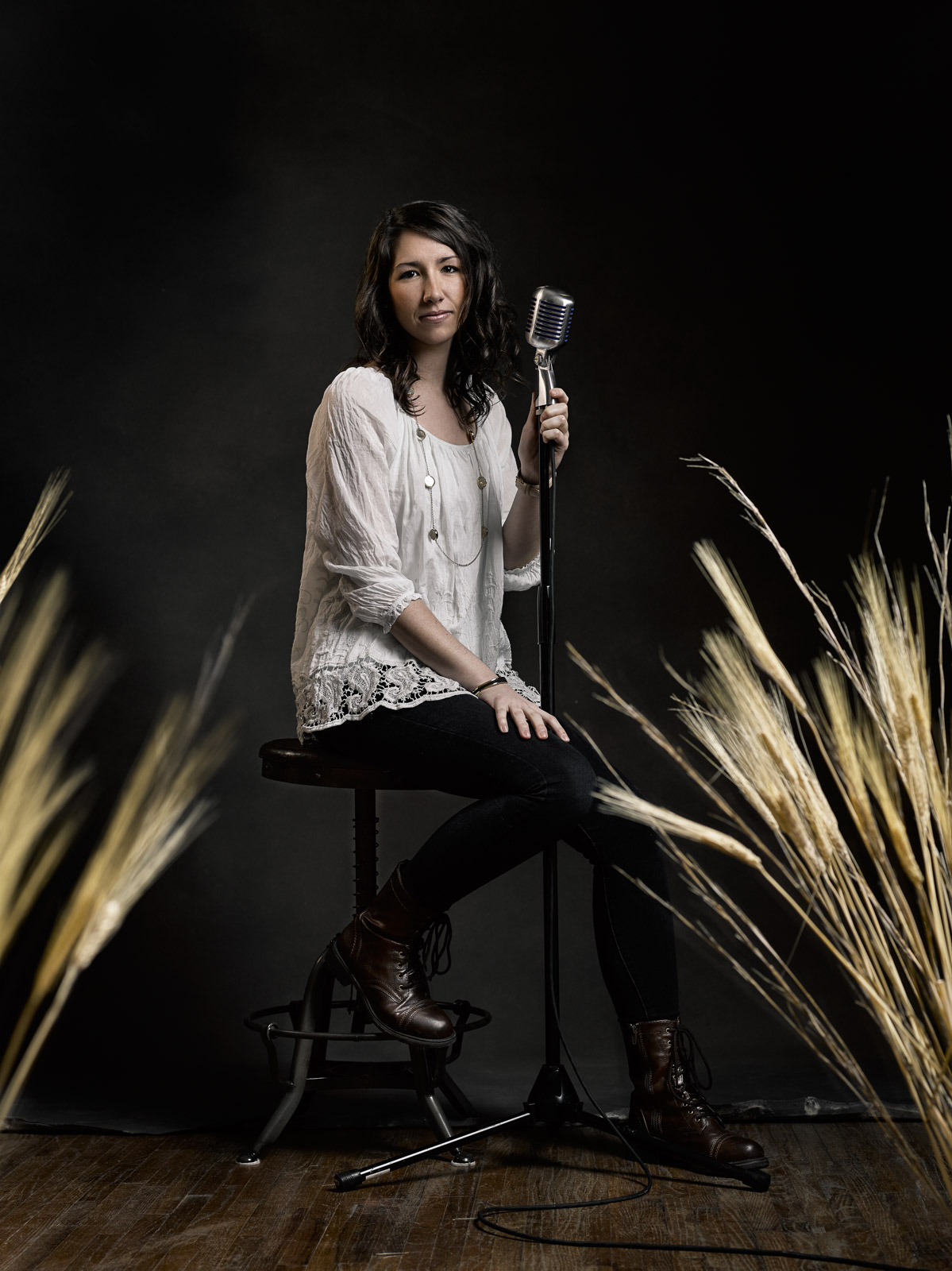 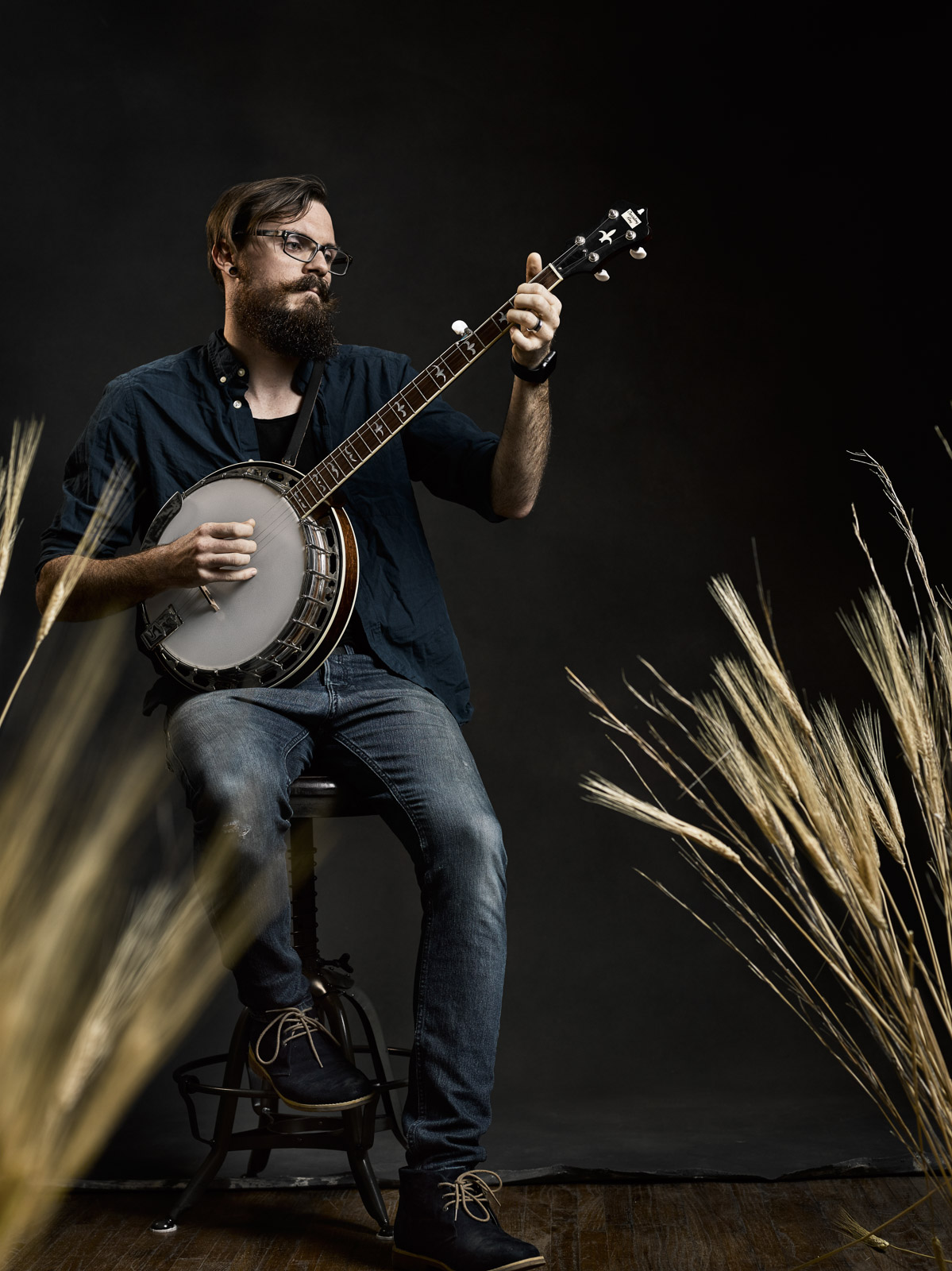 The lighting was pretty simple, I used my go to large Elinchrom Rotalux Octa for the main light and the hit the subject with a rim light from a Beauty Dish with a grid and a 1/2 CTO gel. Easy to set up and I always love the quality of the light from the Rotalux as a main light. Hard to go wrong with that thing! With everything set, we clicked away and called it a wrap! 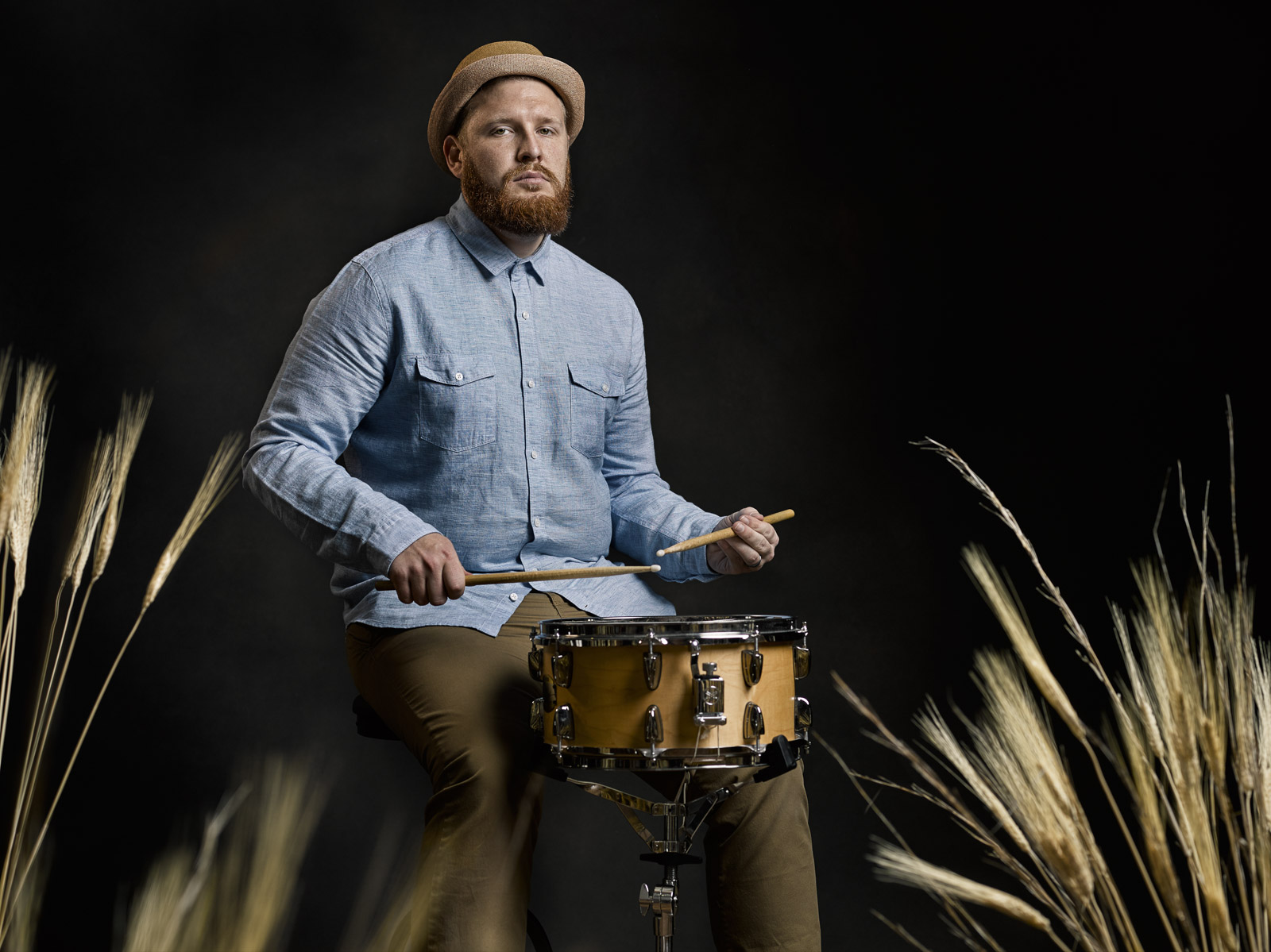 It was a whirlwind morning with the group but we all loved what we were getting out of the shoot and we had a blast working together. Their willingness to try different things and get into “character” in front of the camera was awesome, and the added bonus of somebody playing in the background the whole time made my usual playlist completely useless. It was awesome to hear them sing and I can’t wait to see what’s in store for The Homestead as they keep making more new music and growing as a group!

Want more? Check out the behind the scenes video for a quick view into our shoot with The Homestead and hear them jam around the studio while we got them in front of the camera. Also, be sure to follow us on Instagram and Twitter for more behind the scenes photos and videos and don’t forget to check us out on Facebook! Much more to come next week on the blog as well as some new shoots we have in the bag and what we’ve been up to so far this year!