Have you ever had one of those shoots that you come up with, have a great idea for, find the model and everything you need for the shoot, and then have it delayed for about 6 months because it’s an outdoor shoot and there is a storm every free weekend you can get? Well, this was that shoot for me, and I’m excited to finally be sharing this and thrilled that we got to shoot it!

Let me back up a bit though… 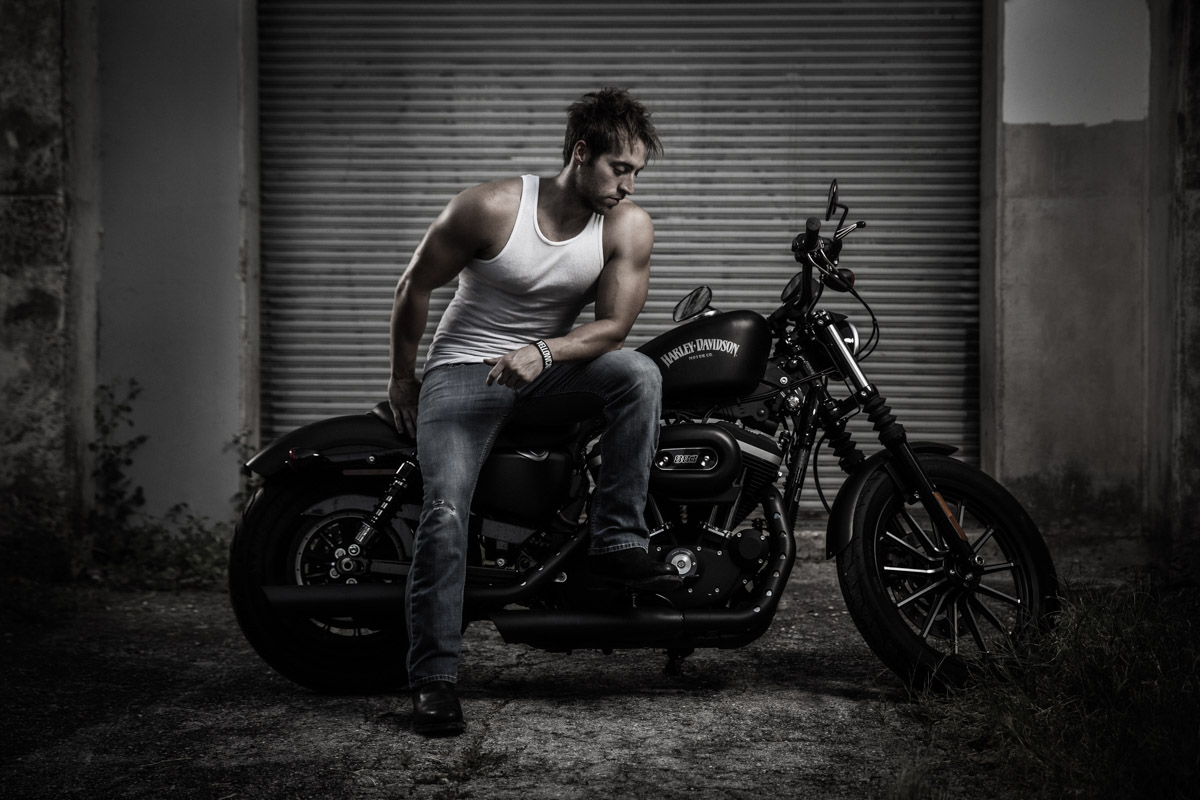 Back in early Spring, I was just scanning through Instagram when I saw this shot of my high school buddy’s badass, matte black Harley. I was immediately telling Sam that we needed to do a really moody type of portrait shoot with a bike like this and started trying to find somebody local to Houston that we could shoot it with. About 30 minutes later I realized I was making it way too hard on myself and I should just reach out to Ace. The dude is ripped, he has the exact bike I want to shoot, and he’s just over in Austin! Sounds like it should work out perfect amiright? Wrong. If you’ll recall, most of Texas was basically under water all Spring and it immediately went from kinda-cool and really rainy to choking humidity and hotter than hell in the span of a week. So, with all of that in mind, we just pushed it off until just a few weeks ago. 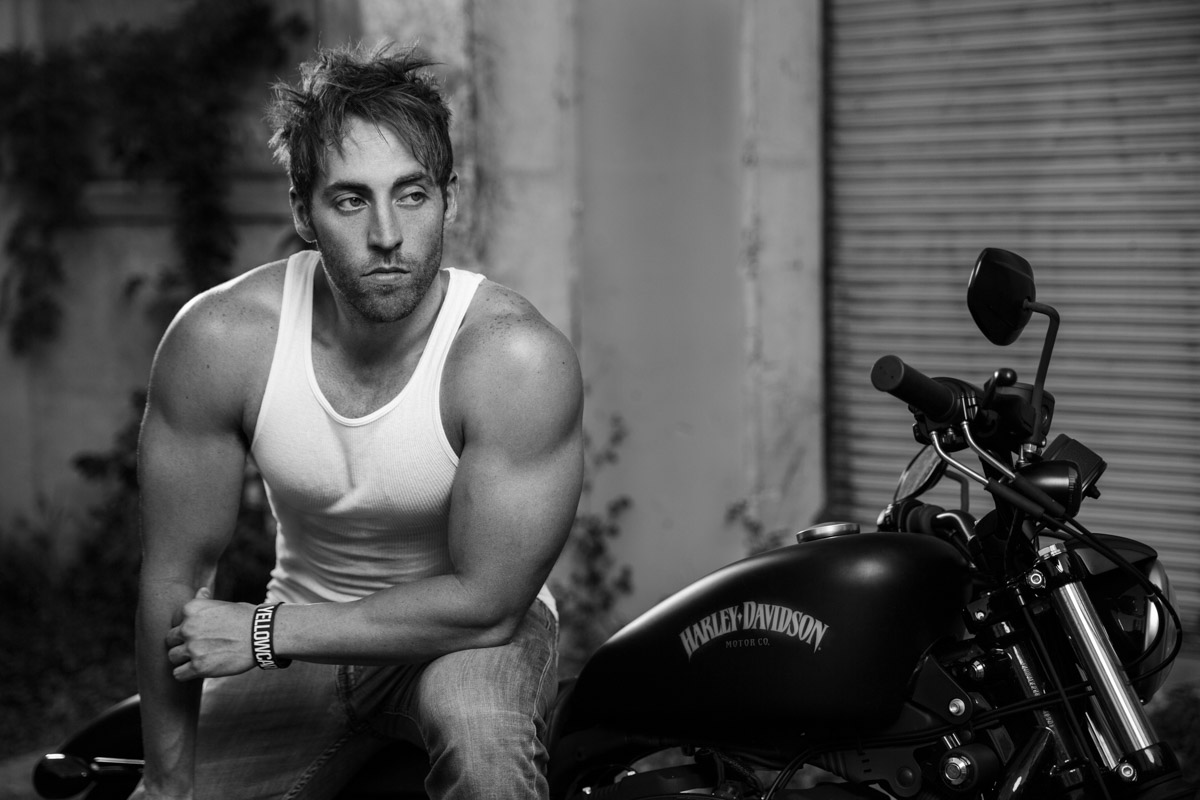 The idea was to get a couple of different looks and shots with Ace and his Harley Iron 883 around downtown Austin. I wanted to keep the lighting pretty moody and closer to the underexposed side of things, and tell a little bit of a story about this guy, his bike, and the girl he was taking out for a ride or a date. Ace and his wife Mary were both on board so it really just came down to us finding some locations and pulling the rest of it together. 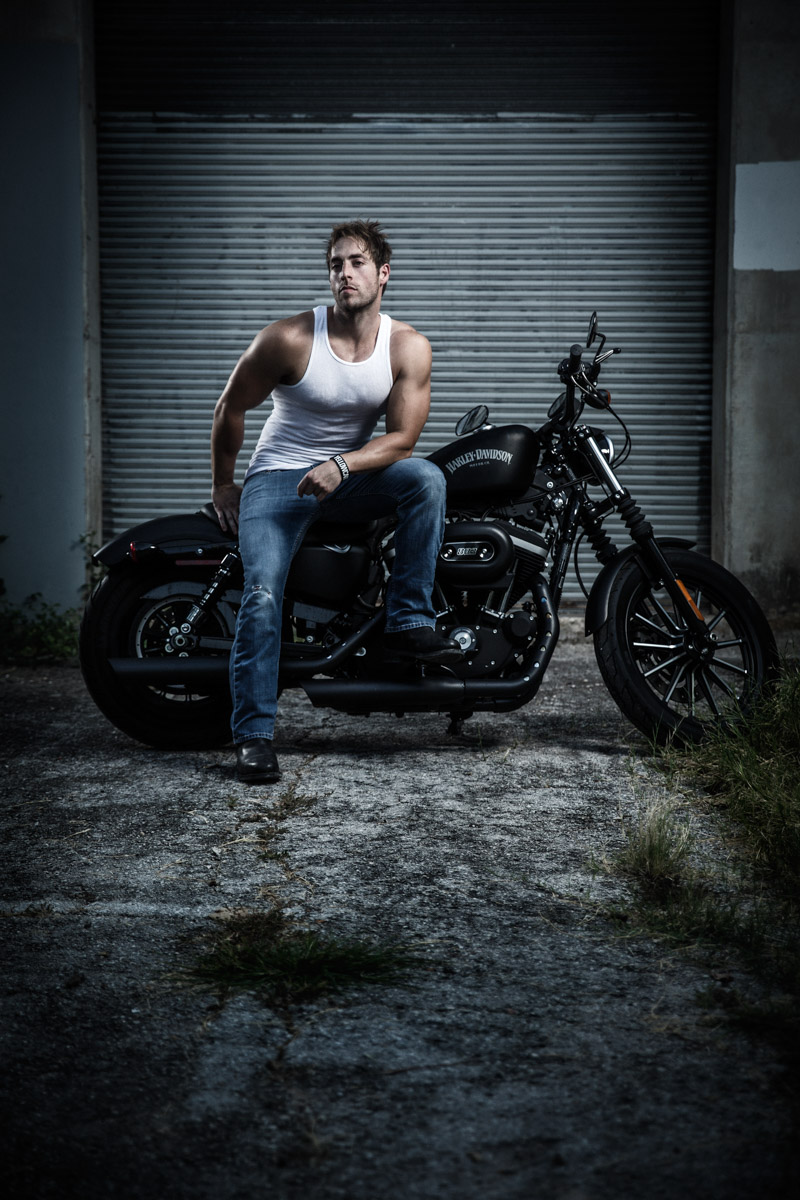 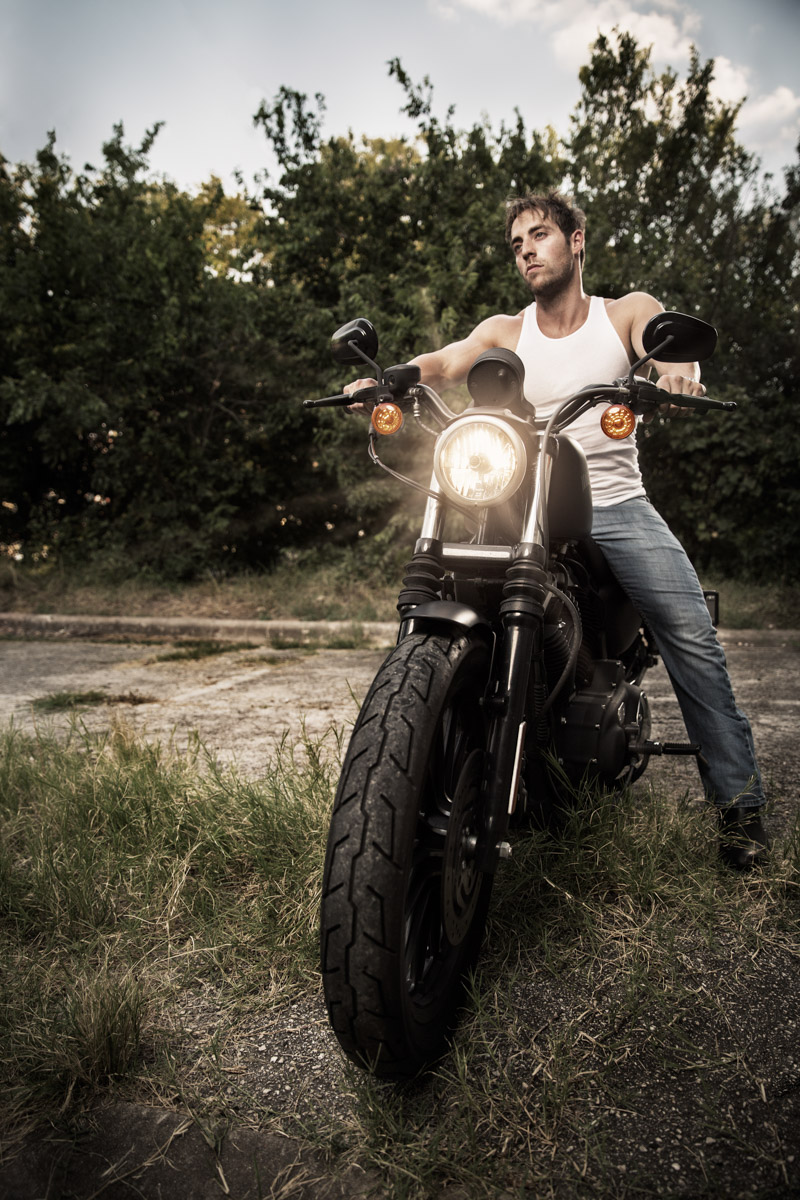 We headed down to Austin on Friday night so we could do plenty of scouting for the shoot the next day and the following morning (more to come on that post later so stay tuned!). We drove around all of Austin when I originally thought it would be cool to find one of the graffiti walls around the city. The more I looked though, the more I worried about the business of the wall and how I wanted the focus to be more on Ace and the bike. We settled on an abandoned looking building just south of downtown and just off the water of Lake Travis. 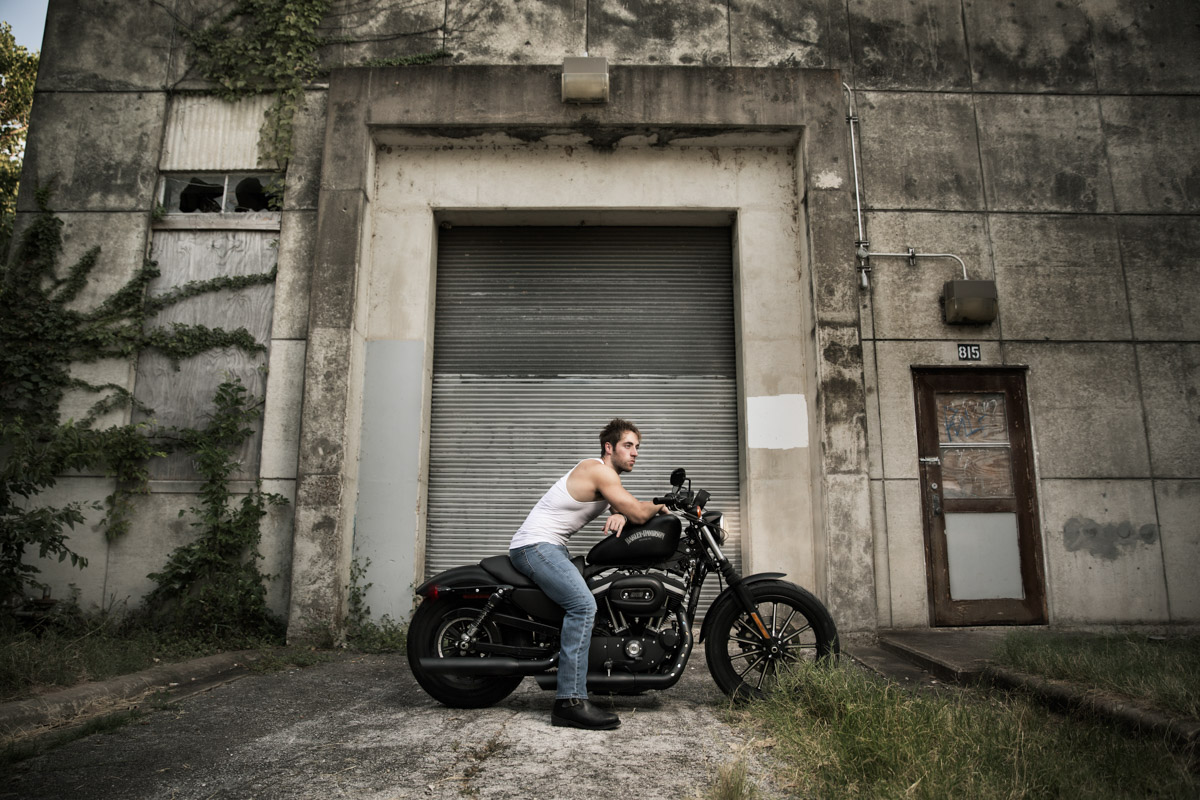 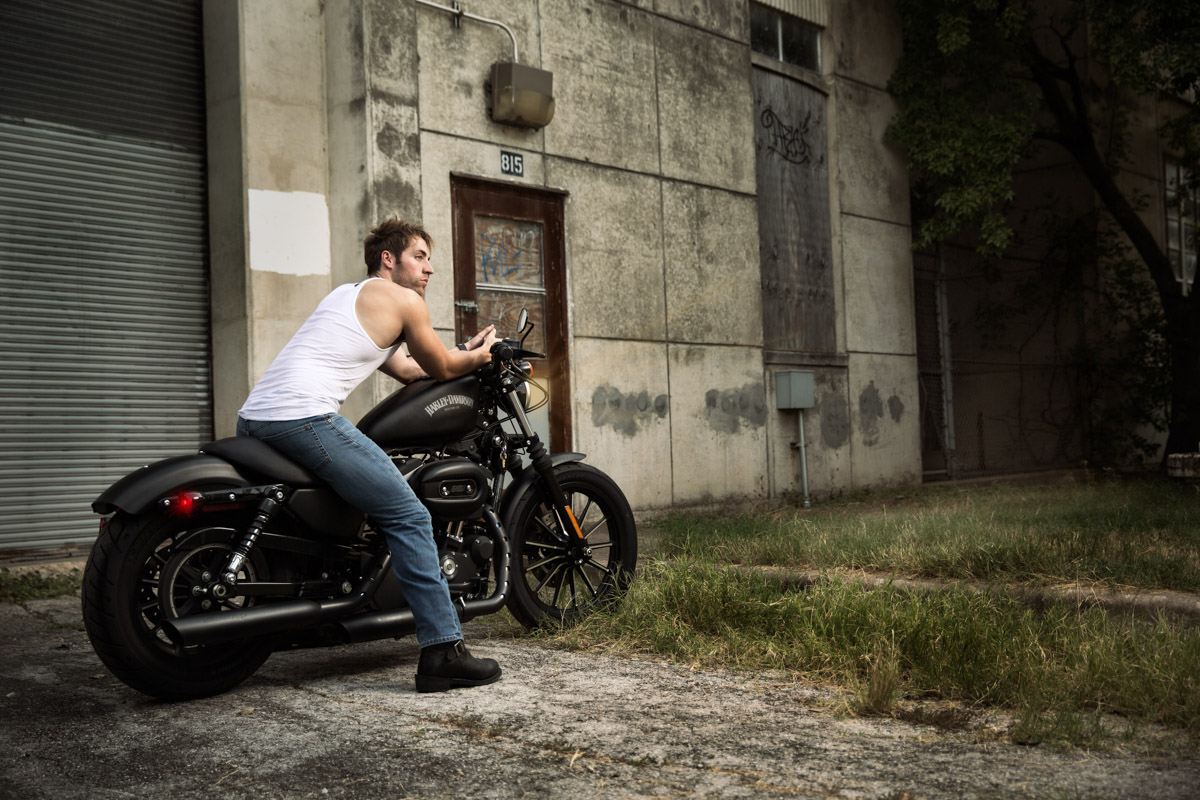 For the lighting, I wanted to use rim lights to separate the subjects and leave them to just be exposed by the available light and stay slightly underexposed to give a cool effect that I thought spoke to the bike and the model. For the shots with both of them, I would slide a light around and light them more as the mood should change to a more neutral tone from a lighting standpoint and tell the story through light. After a few shots, I knew we were getting something cool and I could see them really coming through in black and white. 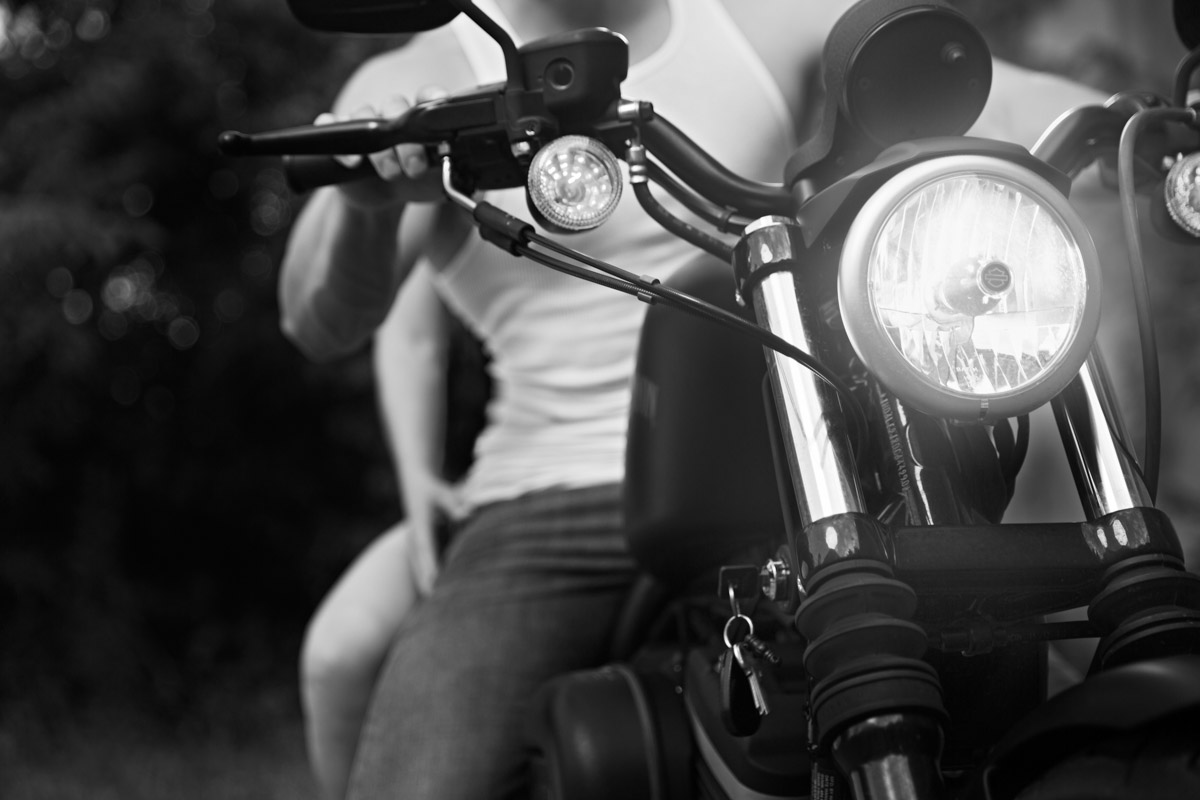 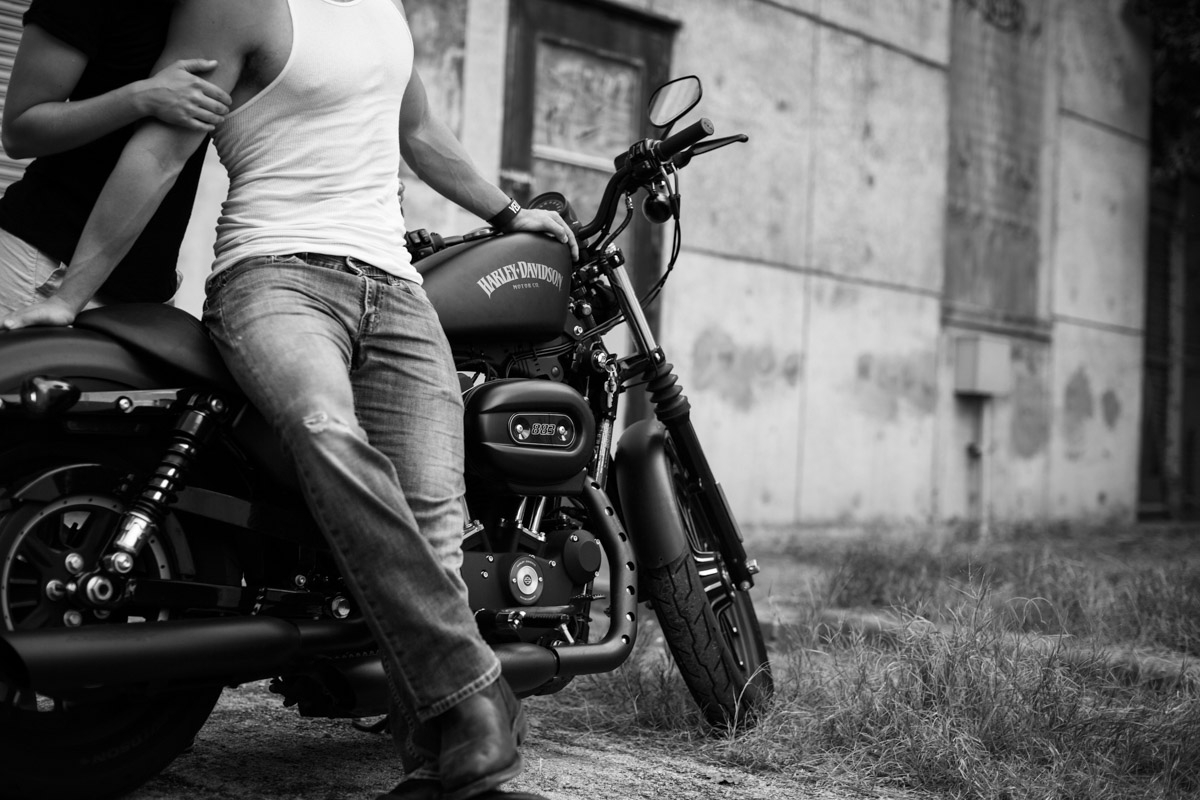 After shooting Ace for a while, we jumped Mary into the picture and still kept the focus on Ace and the bike but added Mary as the aspect of the “date”. The fact that these two have been together since I’ve known them and are married in real life helped add a little more to the moment and we captured some really nice images. 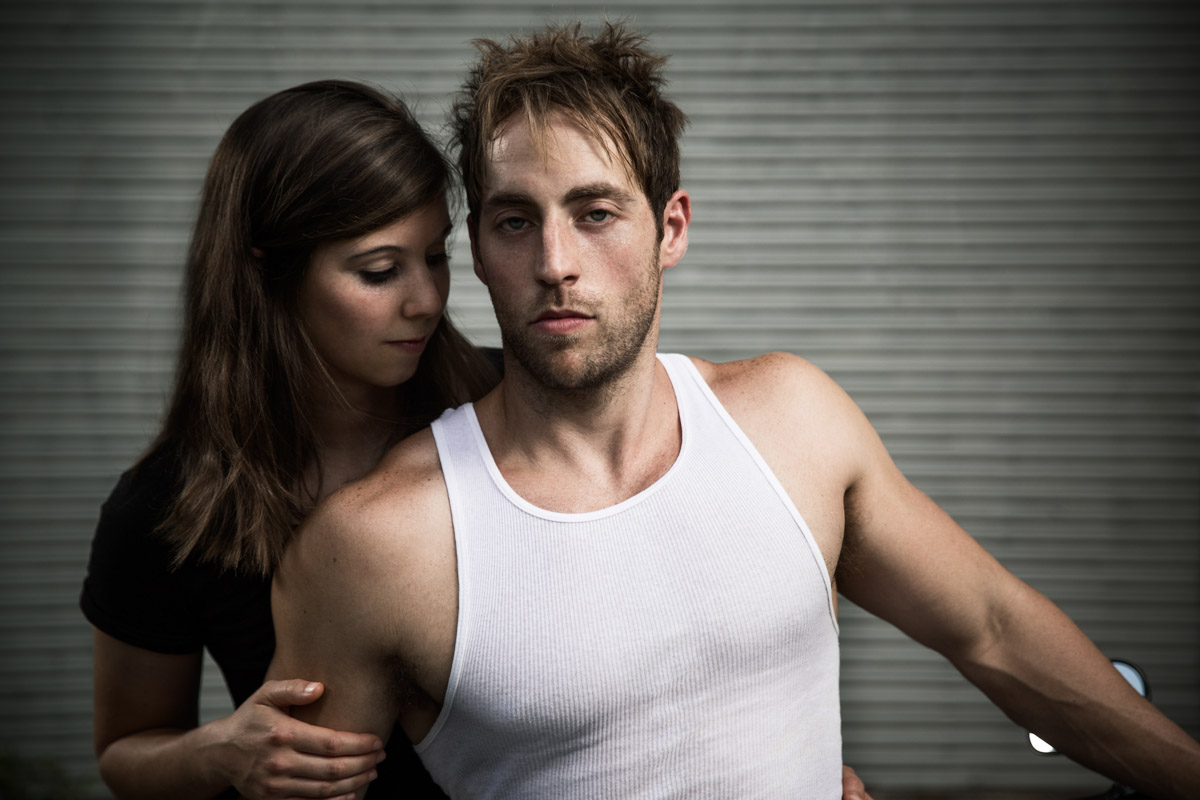 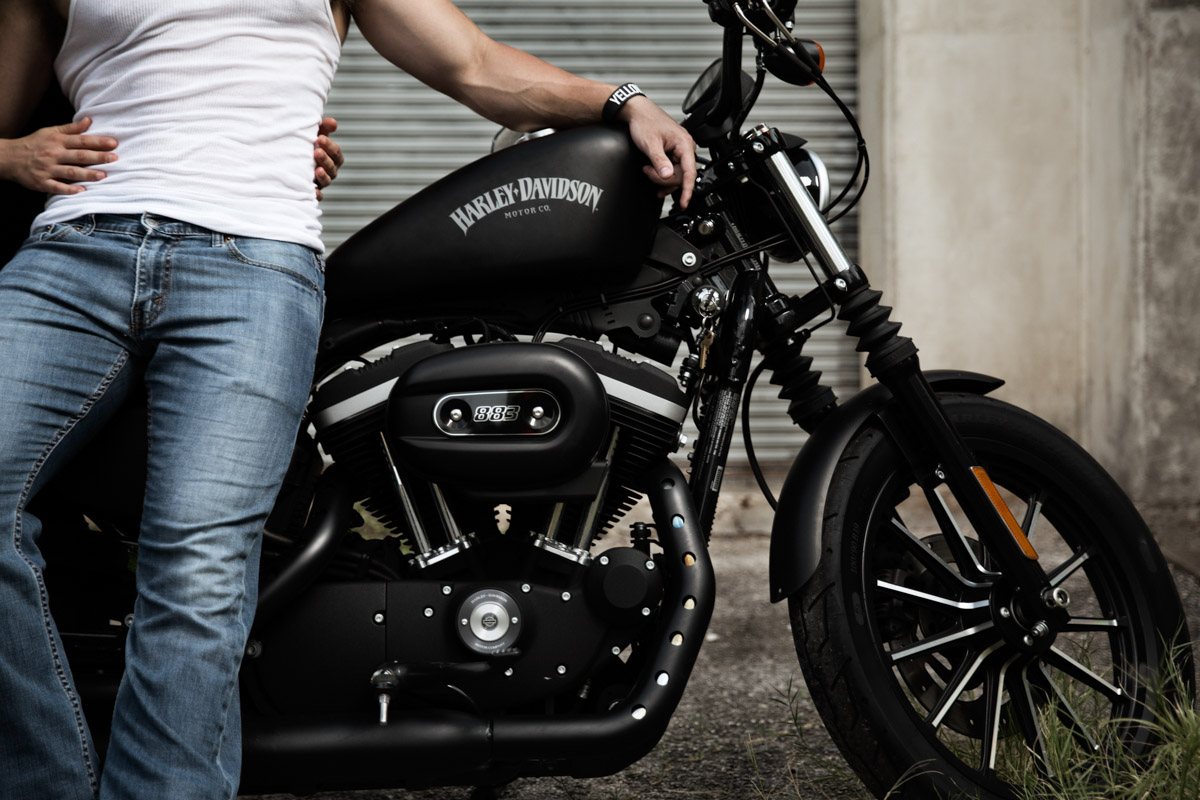 Finally, we finished the whole thing up with Mary’s badass Harley Davidson jacket under the 1st street bridge. The Bat-fest was going on so we weren’t alone, but we made it work and I used a hard cross light that I liked a lot for the image. By having Mary face towards the light and Ace face the camera I was able to create this cool dynamic of soft light on her face and a defined cross-light on Ace. It was a great way to end the evening with the sunset hitting the water and pillars behind them, and playing with the warm light was awesome. 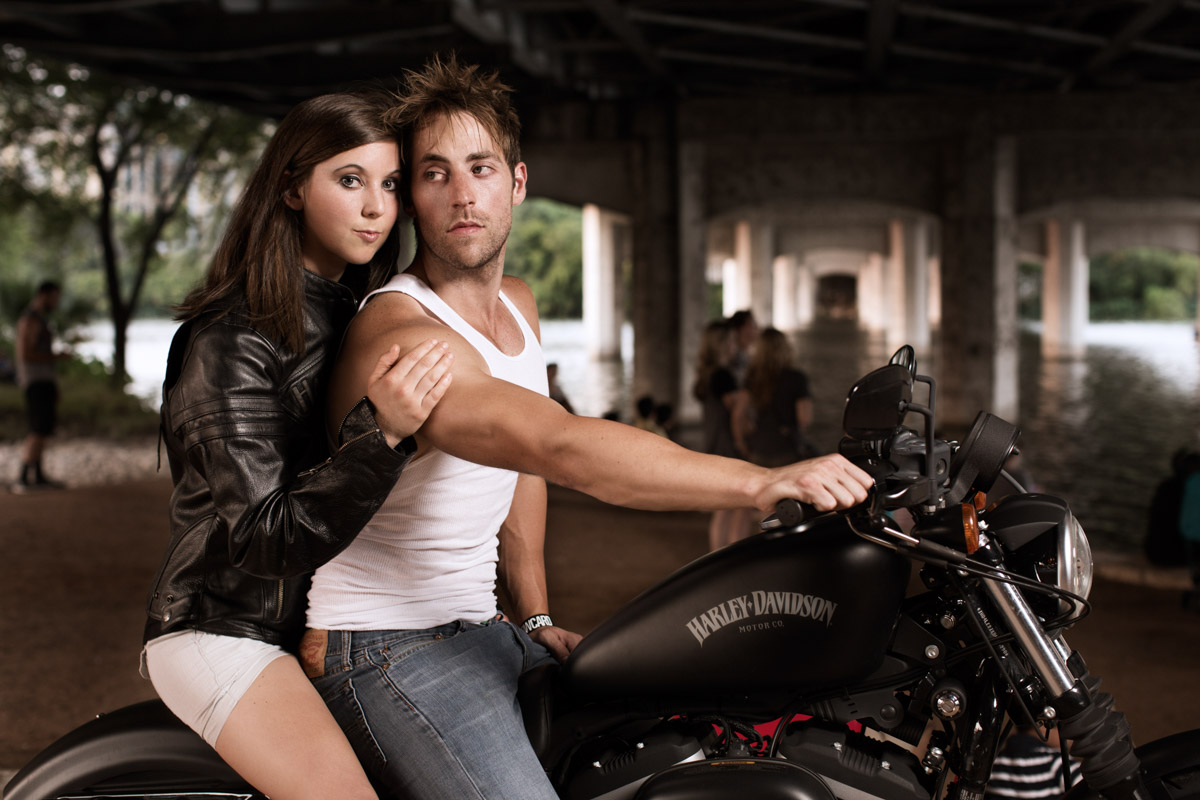 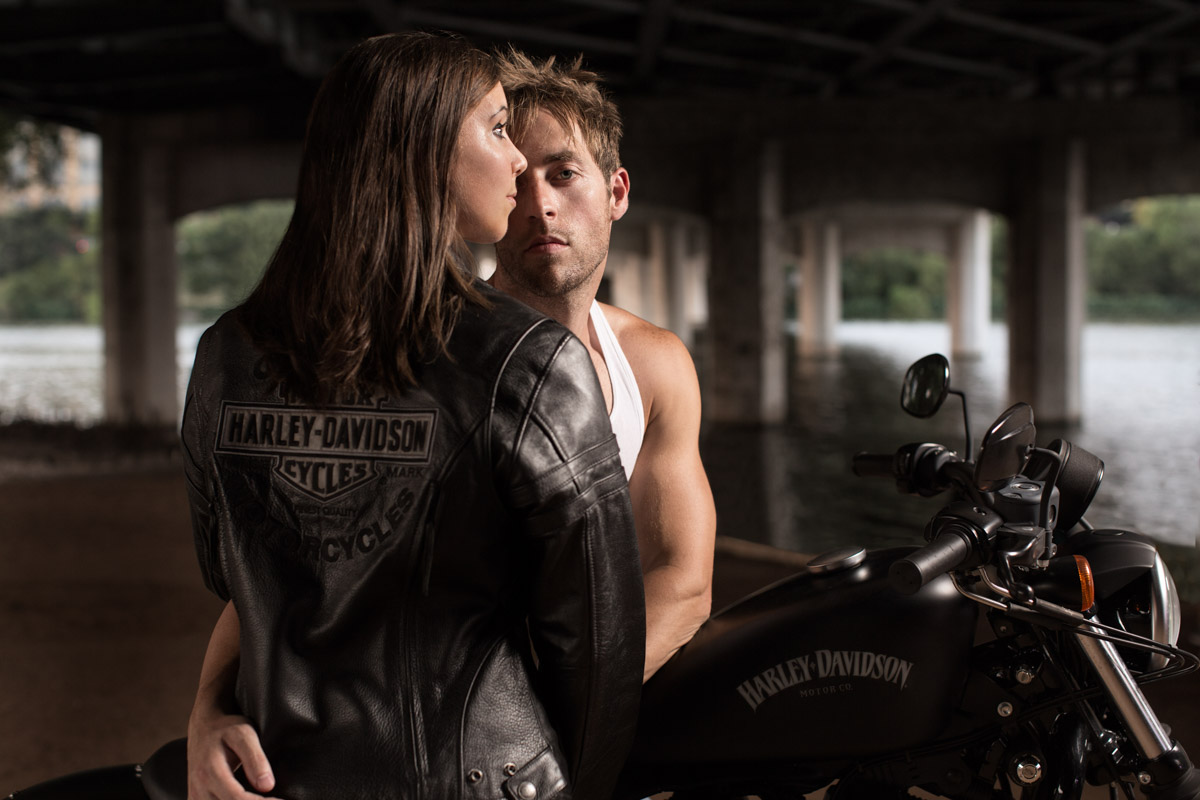 All in all, I love doing shoots like this when I can. Adding something different to what you’re used to shooting and changing up the aspects you’re used to lighting with can challenge you to create something different and help you learn something new that you can use in your work. Creating work for clients is awesome and inspiring in itself, and I feel like doing shoots like this one help compliment that work in a way that helps you grow as an artist. I love shooting sports, but I know I need to be able to add portraits and storytelling to my work and I’m extremely fortunate to have such awesome friends who are willing to stand in and help out. One last huge shoutout to Ace and Mary for coming out and having some fun with us, and you have to be sure to follow this guy on Instagram as his cartoons and artwork is phenomenal!

More on our shoots in Austin on the blog next week so be sure to follow us on Twitter and Instagram for more shoots coming soon!