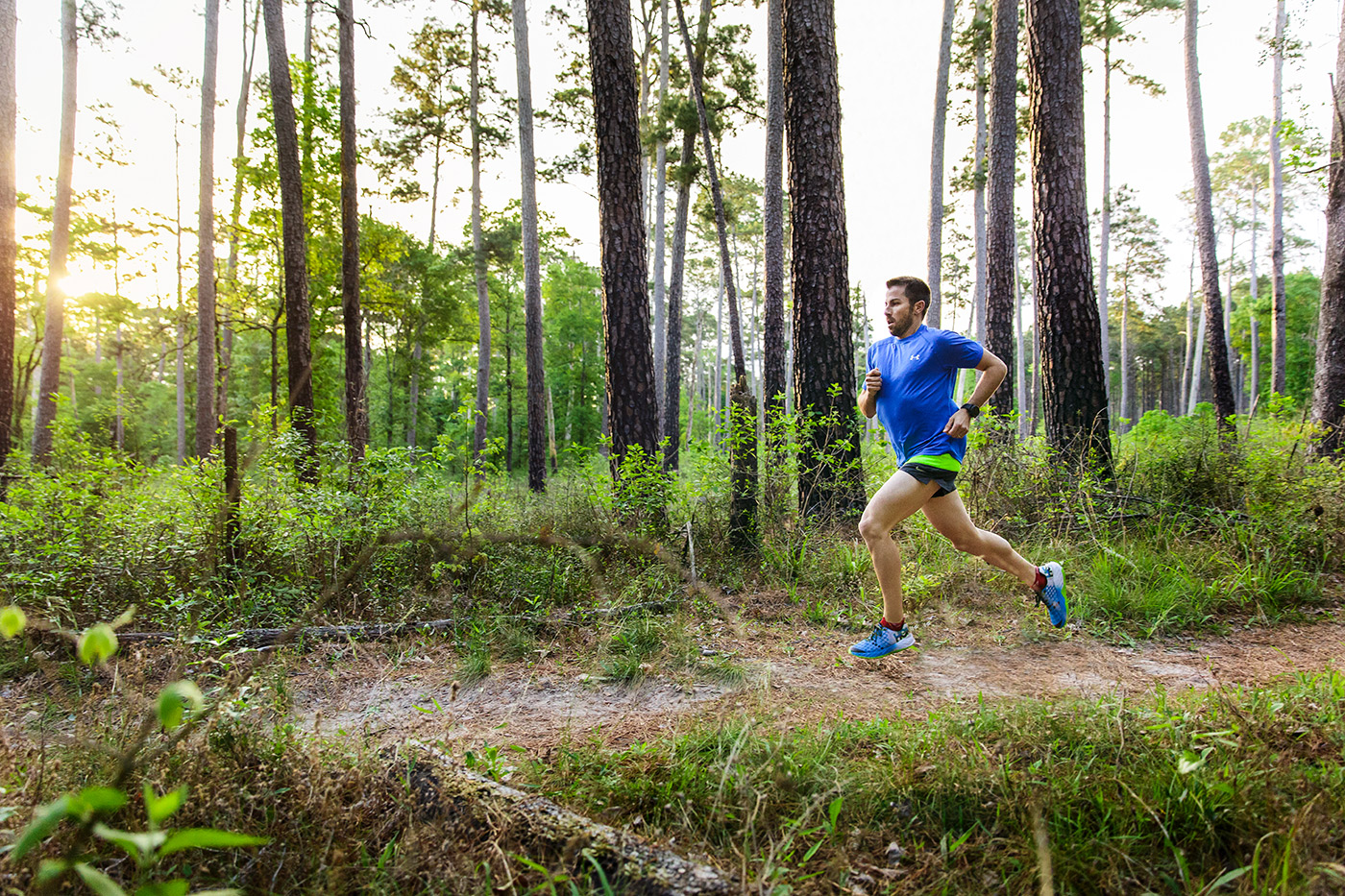 Last March I received a call from a publication I had done work for years ago – Trail Runner Magazine. They were going to have a feature in their upcoming June 2017 issue that focused on trails that were close to some of the largest cities around the United States. With Houston being one of the largest cities in the US by both land and population, they needed some shots along one of the larger trails in the area – The Lone Star Hiking Trail. So, I grabbed my F-Stop Tilopa bag, called my good buddy and world class ultra-running athlete Ronnie Delzer and some of the awesome people over at our local Lululemon and asked them to follow me into the tall pines of North Houston for a photoshoot. Due to timing, we actually had to break up the shoot into two different outings as only the sunrise would work for Ronnie who I really wanted to shoot for his own exposure (the guy is not only winning 100 mile races, but was also the 2017 US Trail Running National Champion for the 100mi distance) as well as because he just looks effortless on the trails. The two of us met before dawn and drove to a spot that I had picked out on the trail that was close enough so we didn’t have to drive too far and also in an area near Lake Conroe that looked like it wouldn’t be too overgrown with undergrowth the way that the woods around here can get. We were off in the woods before the sun was up and it was chilly enough that I sent Ronnie off running a bit before the sun came up to stay warm while we waited for some more light. Knowing the magazine’s style, I left my lights at home for the shoots and was going to utilize only the warm tones of the morning light to catch Ronnie, and in doing so I needed a lot more of it so I could speed up my shutter speed and make sure I was stopping the action as he flew by. I also knew I wanted a bunch of different images that were pulled back for more of a landscape view (as much as you can in thick pines), a wide view of Ronnie running by, and a shot head on of Ronnie running through the trees compressed at a longer focal length. I chose to start with the more pulled back images of Ronnie, trying to catch the sunlight coming through some of the morning haze created by all of the pine pollen. (Note: a shoot in March, in the pine forests is not for those who have serious allergies. Wow do we get some pollen in Houston!) We looked at a couple of different areas, and I as actually happy I sent Ronnie off running ahead of me because he found an area better suited for this that I had because there was a slight (ever so slight) incline to the trail that would allow me to get slightly above him and catch a little more of the background and show the tall pines that surround the length of the trail. 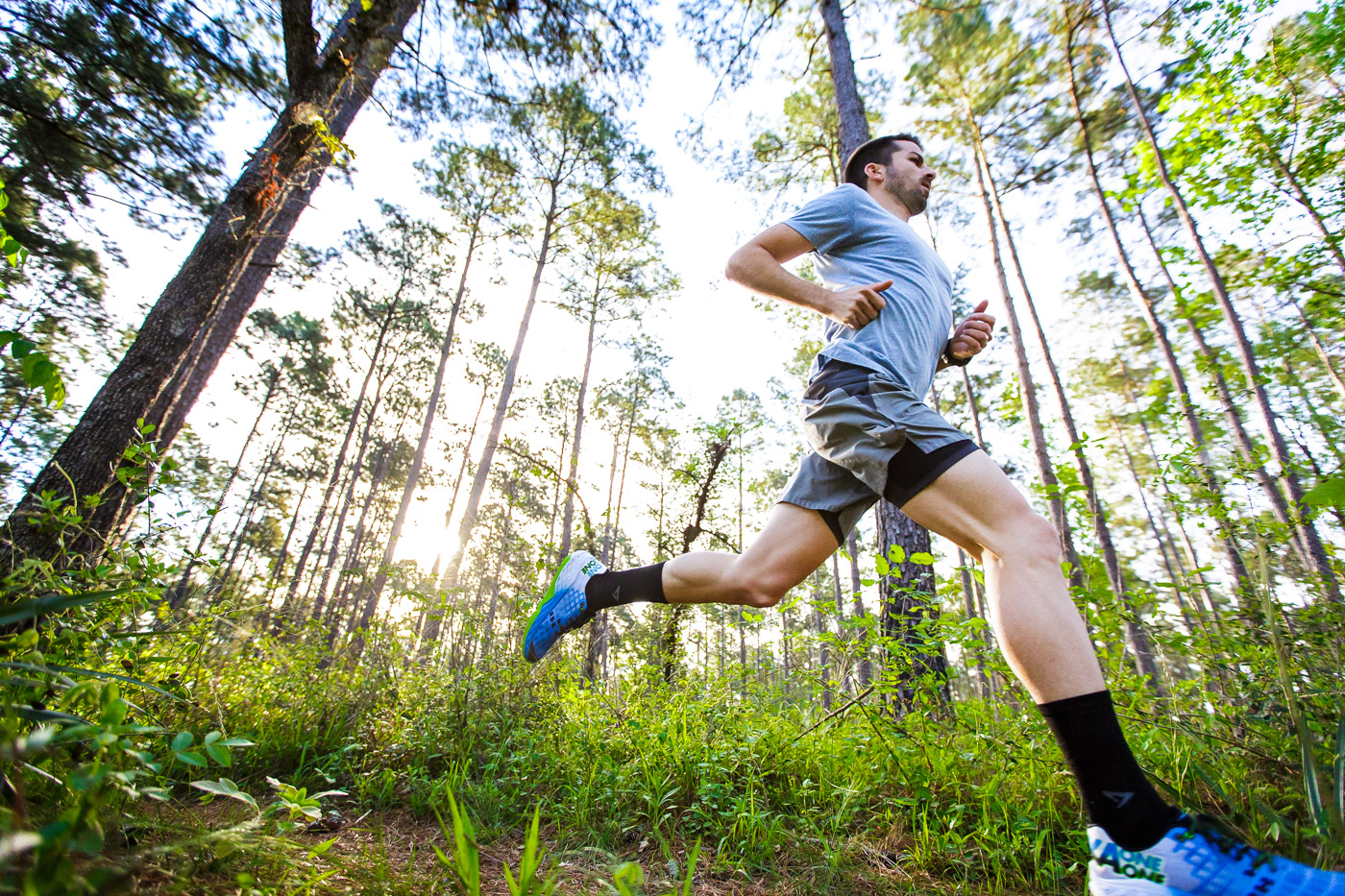 With those in the bag we moved up to a less densely forested area and worked some shots of him blowing by me on the ground, trying to accentuate the height of the pines rising around us, and finished with arguably my favorite set of Ronnie blasting through the trees. For these I shot with the Canon 16-35mm f/2.8 II lens at a pretty wide open aperture. Because of the effects of the wide angle I wasn’t as concerned about the shallow depth of field as the relative depth would more than make up for it. I was shooting close the the bottom end of the focal length as well, typically staying between 16mm and 20mm to get everything into the frame I wanted while trying to play with the images so the distortion wasn’t unbearable to the human eye. After getting these, I switched out to the big daddy: the Canon 70-200mm f/2.8 IS II telephoto lens. The goal was to shoot around the 200mm focal length, backed off of Ronnie and wide open at f/2.8. I was shooting in AI Servo at high speed and allowing the camera’s internal focusing system to track Ronnie as I shot him. I had done this previously in Colorado with Trail Runner Magazine and really liked the results. You have to back off a ways from your subject in order to zoom in like this, especially for how much I wanted to capture of the landscape around Ronnie as well, but it was worth the shouting back and forth to get the shot. The final aspect of shooting almost directly on like this is the timing of the stride. I tend to shoot it just a bit earlier than I would from the side to try and avoid the runner looking like they are missing a leg or standing like a flamingo. I move the shutter just slightly closer to the take-off point of the stride rather than just before the front foot hits the ground. With those in the bag, we headed back home and off to work for the day. I also had to plan the photoshoot with the Lululemon peeps for that evening around sunset in a completely separate area of the forest. 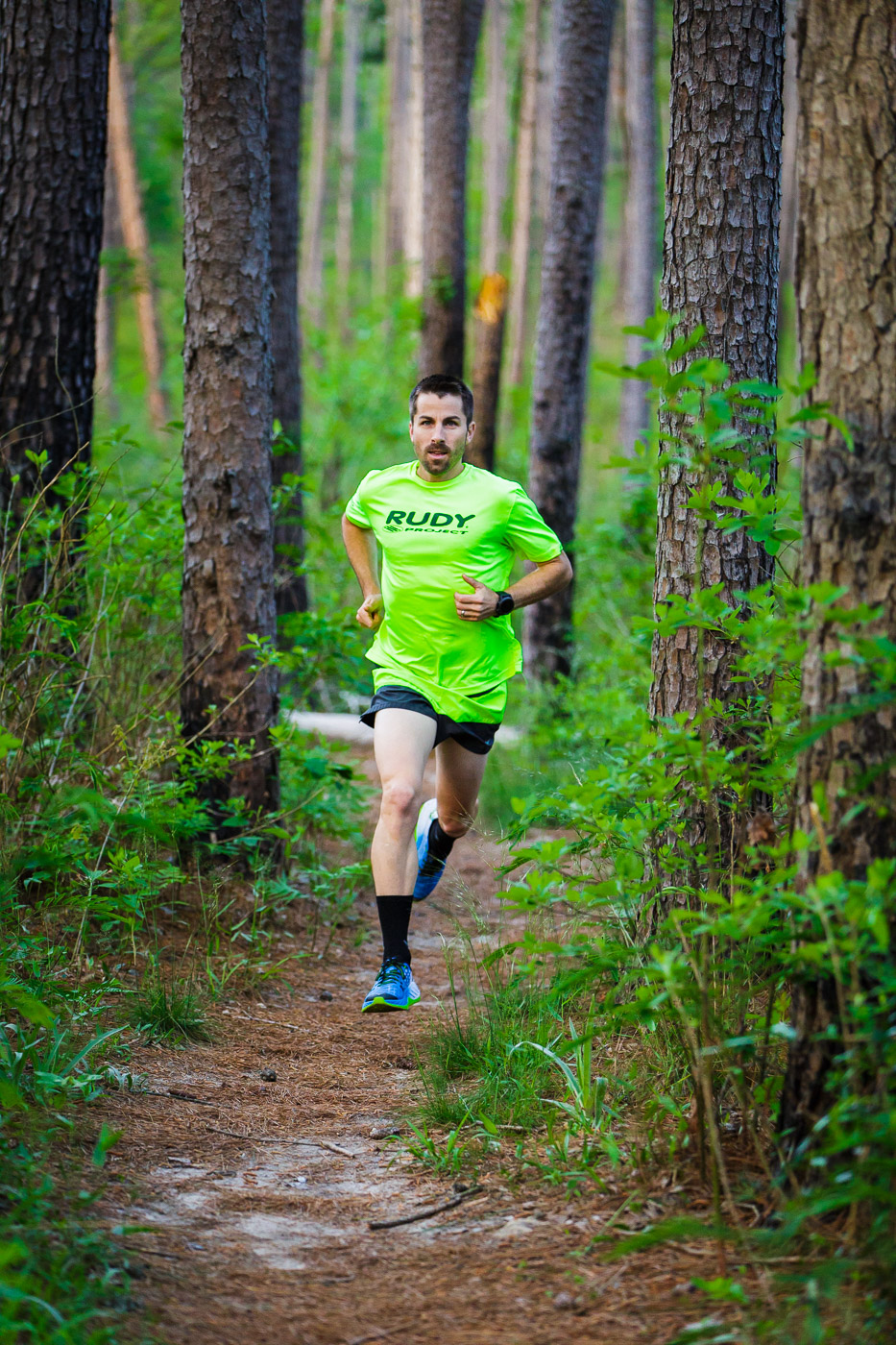 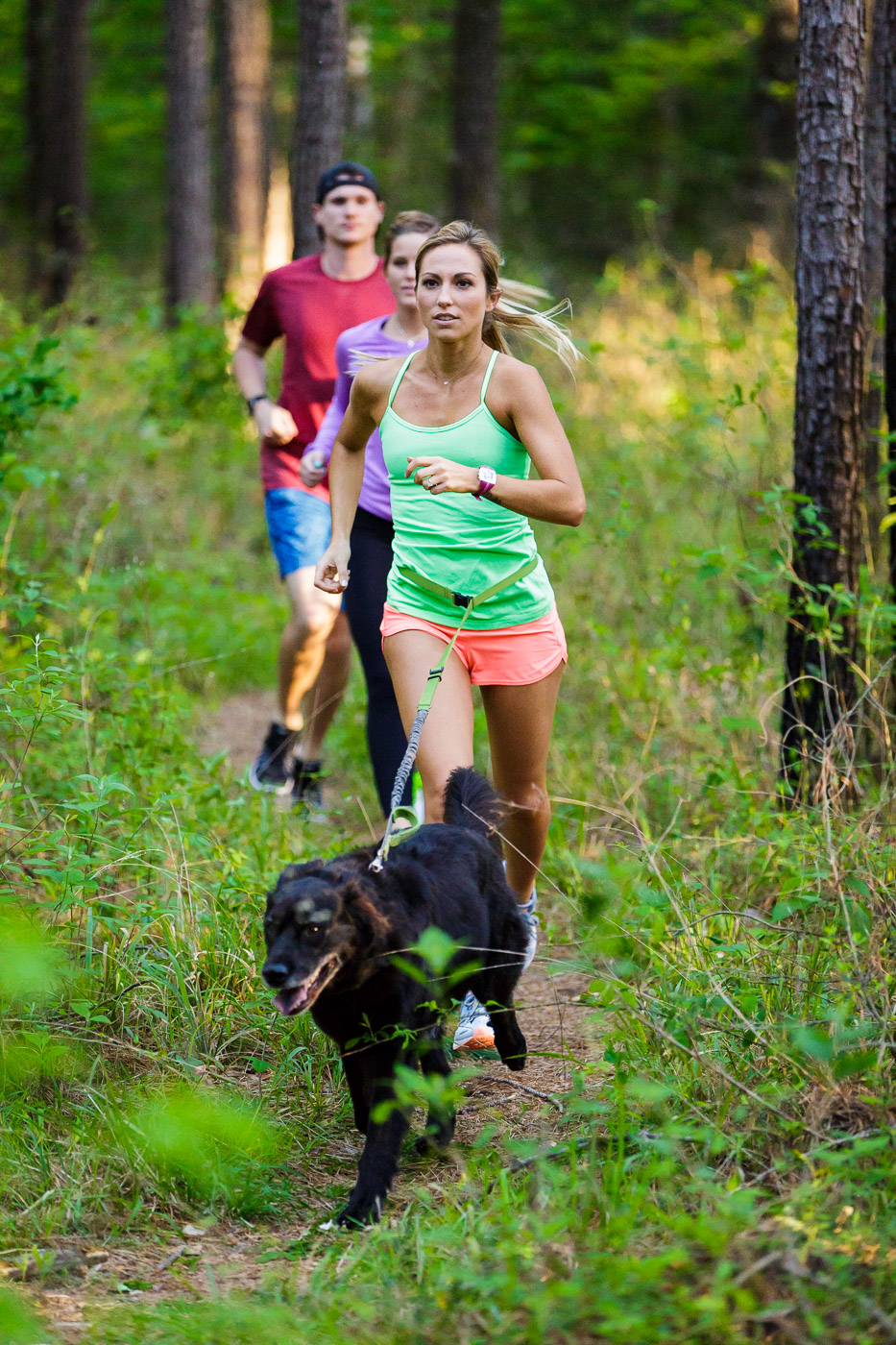 For the second part of the shoot, I wanted to change things up and capture a group running together through the woods. Groups are always more difficult because you have to take into account spacing, matching strides, and making sure that multiple pairs of eyes are in the right direction and strides are at the right point in the run. With some runners, this is absolutely flawless, with others it can be painful to coordinate. I’ve shot with all pro runners and I’ve shot with local amateurs and I’ve seen the best and worst from both groups so I don’t think that this has anything to do with how great a runner you’re working with, it just works sometimes and it doesn’t sometimes. For this group, I’d say we were at about the 50-60% success rate on being in sync which I’ll consider a win any day when shooting three runners in the same frame. We also had the awesome aspect of my friends Jaimee bringing her running buddy along with her for the shoot: her dog Lobo. As soon as I found that out, I was determined to get Lobo into the magazine for her. Just like we did with the shots of Ronnie, I wanted some pulled back shots, some closer wide shots, and some compressed telephoto shots to give the magazine some different choices. We followed very much the same pattern with Ronnie and the same equipment for the different jobs. The most difficult part of this shoot was the location. We travelled a little farther along the trail for this shoot and the undergrowth was extremely dense along the entire stretch of trail I had chosen. Typically I would have done some more locations scouting, but we were on an extremely tight timeline to get the shoot done, and I was flying out for LA the next day so I was going from getting the call/email from the editor to planning the shoot, finishing the shoot, and editing the images, in a matter of about 72 hours. One day to plan, one day to shoot, one day to edit (on a plane) and I was working my normal job during the day on 2 of the 3 days. Like I said, tight timeline. In a perfect world I would have grabbed my mountain bike and really nailed down the locations much better before I ever took equipment and models out for the images. After hiking a little ways, however, we were able to find an area where more sunlight was spilling through the dense trees and set off creating images. We really had a blast and I have to give a huge shoutout and thank you to the Lululemon Woodlands crew, specifically Jaimee Cox (check out her new digs at Pure Barre Coeur D’alene!), Annie Fletcher, and Justin Thomas for coming out and fighting off the mosquitoes with me for a fun evening of running and photography! 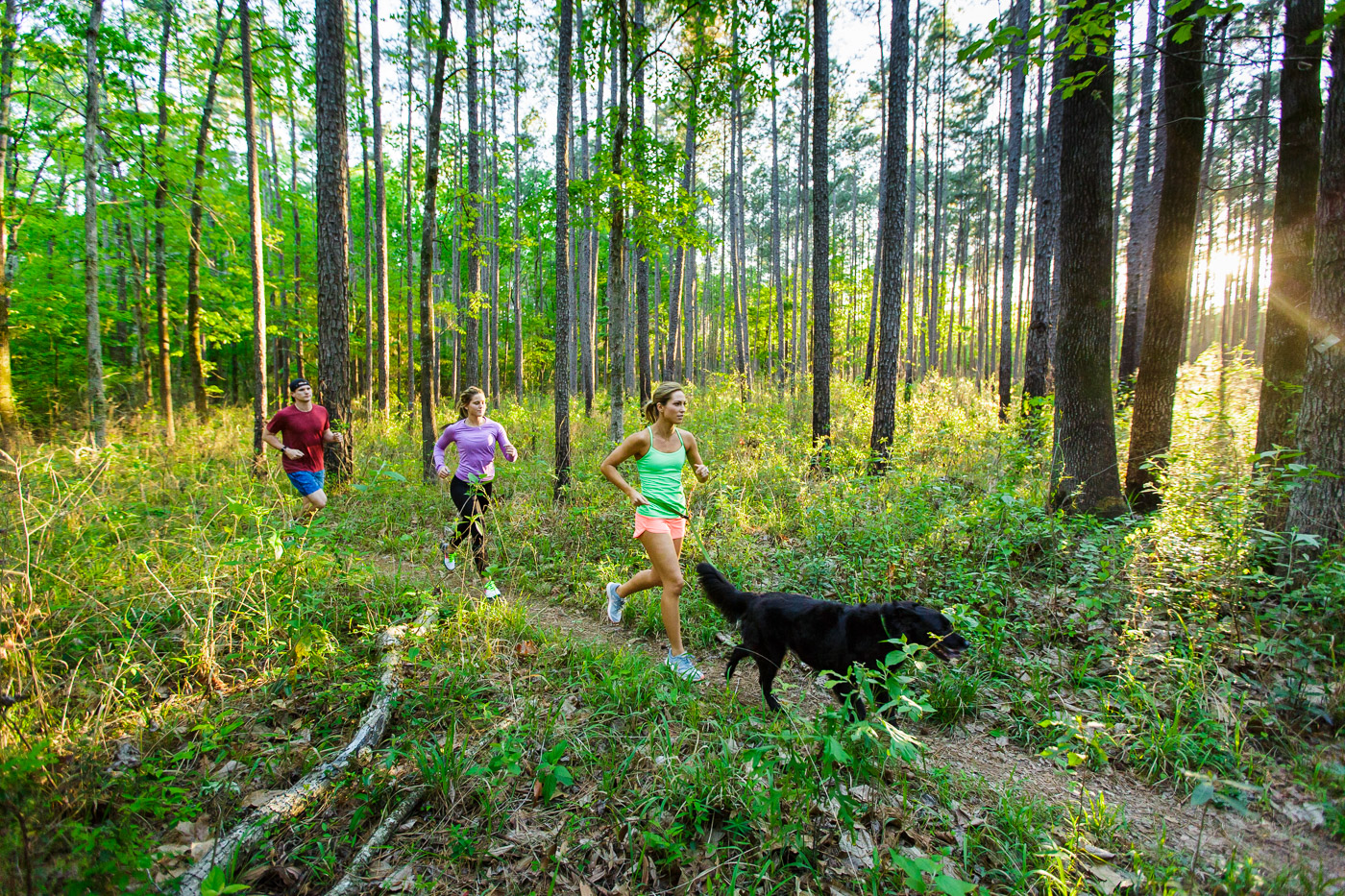 The magazine ended up running with 3 different images across their Table of Contents, a full page of Ronnie blasting through the trees, and even Lobo made it into the magazine with the group shot of the Lulu-crew out for a night run along the Lone Star Trail. I love getting to work with this publication and really look forward to more shoots in the future! Want to see it all? Make sure you don’t miss anything by giving us a follow on Instagram, Youtube, Facebook, Twitter, and – of course – by hitting “Subscribe” to receive our monthly newsletter!