We all would love to believe that photography just happens and that all art is spontaneous and motivated by the moment and what’s in front of you. But, it just doesn’t happen like that. It takes a lot of time, work, forethought, and initiative before the camera is ever picked up. I know that I’ve touched on this many times before, but I believe that explaining the work done before we step foot in the studio is key for every photographer to understand. This test shoot was meant to focus on creating nice, soft portraits of models and feature our beautiful new background from Oliphant Studios. I did a previous post and video on this wonderful piece of art, so I won’t rehash it, but it was the driving force behind this series of shots. The muted tones and subtleties set the standard for the shoot, and from there it was investing some thought into what I wanted to create. I wanted a good mixture of warm shots and muted, cool shots so we had to come up with different motivations for each set of images/poses, how we were going to efficiently move from one set to the next without losing too much time and flow, and what our test models needed to look like to convey what we had in our heads. Whenever I get to this point, I like to reference those that have come before me. I don’t think of it as stealing or being uncreative because so much of art is looking at what others have done and building on it with your own eye, intuitions, experiences, and volitions. For this shoot, I referenced Dan Winters’ works as well as those of Dean Bradshaw. Both of these amazing photographers have created awesome works, and I loved the various tones and the way they used soft light, simple set ups, and elicited great expressions to bring the shots to life. Next, I sat down and started to build the light set ups on my iPad using the Photo Studio Light Setup App to create visual representations of where I thought the lights would go. I created to following 5 setups and knew that we could modify and move these around as needed to get the final effects in camera that I wanted to create. 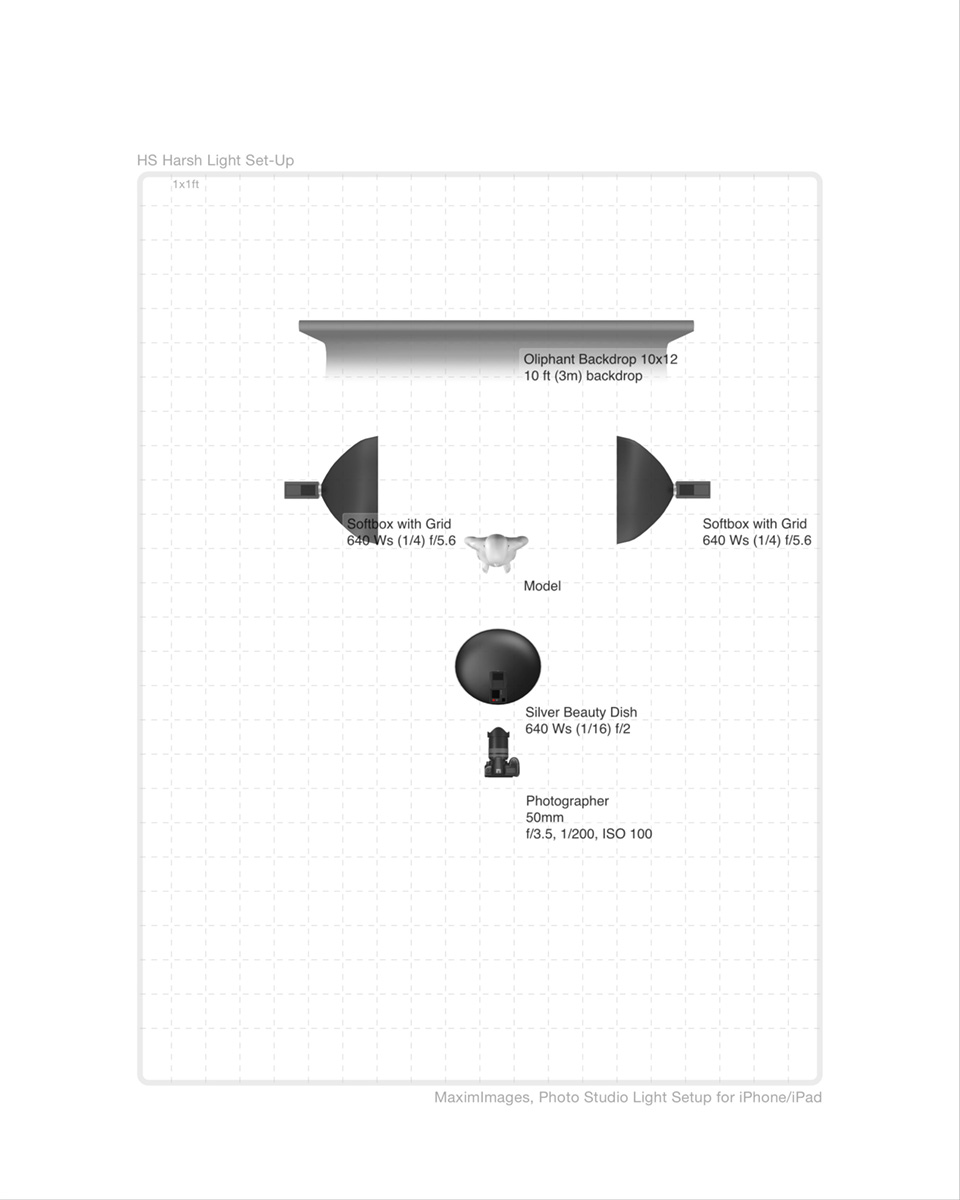 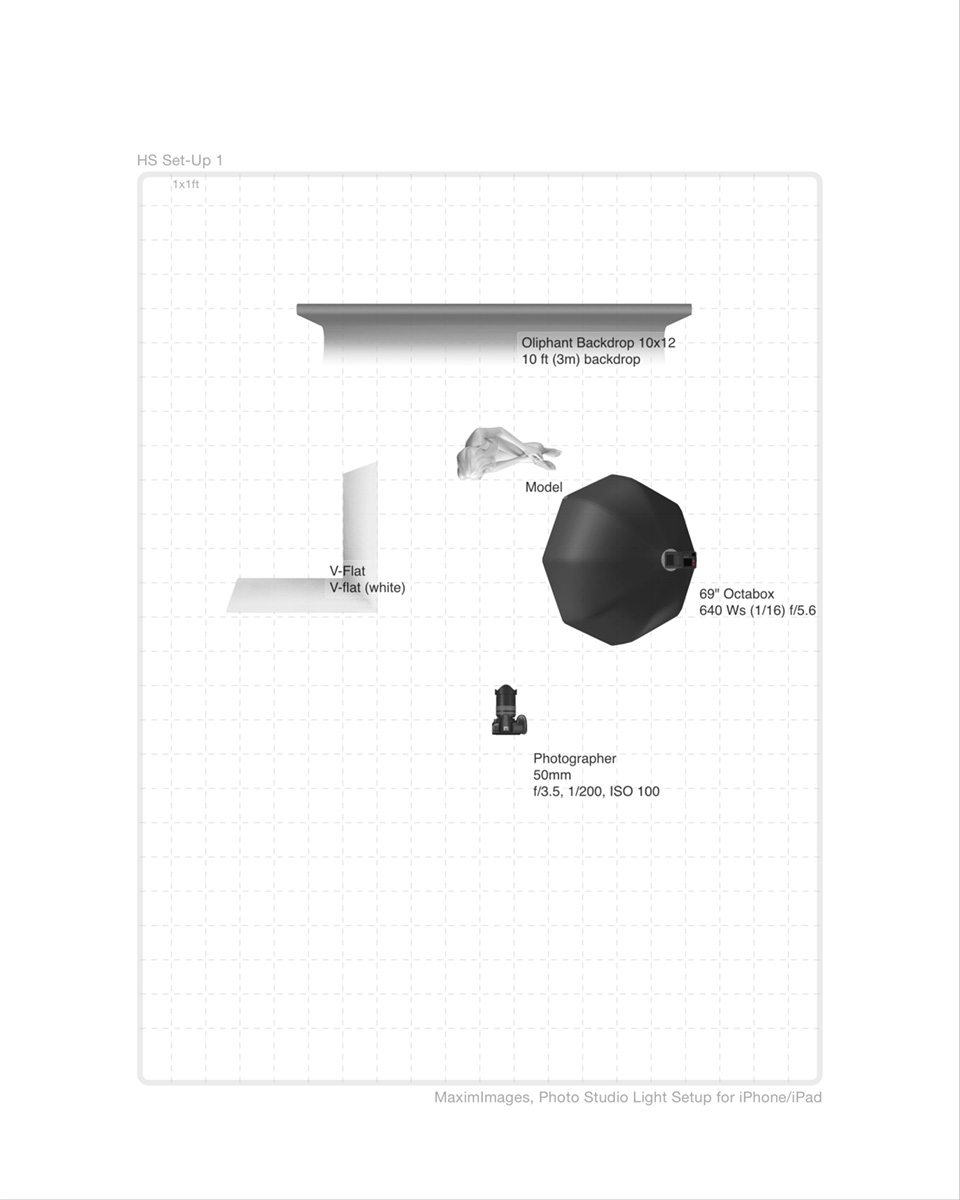 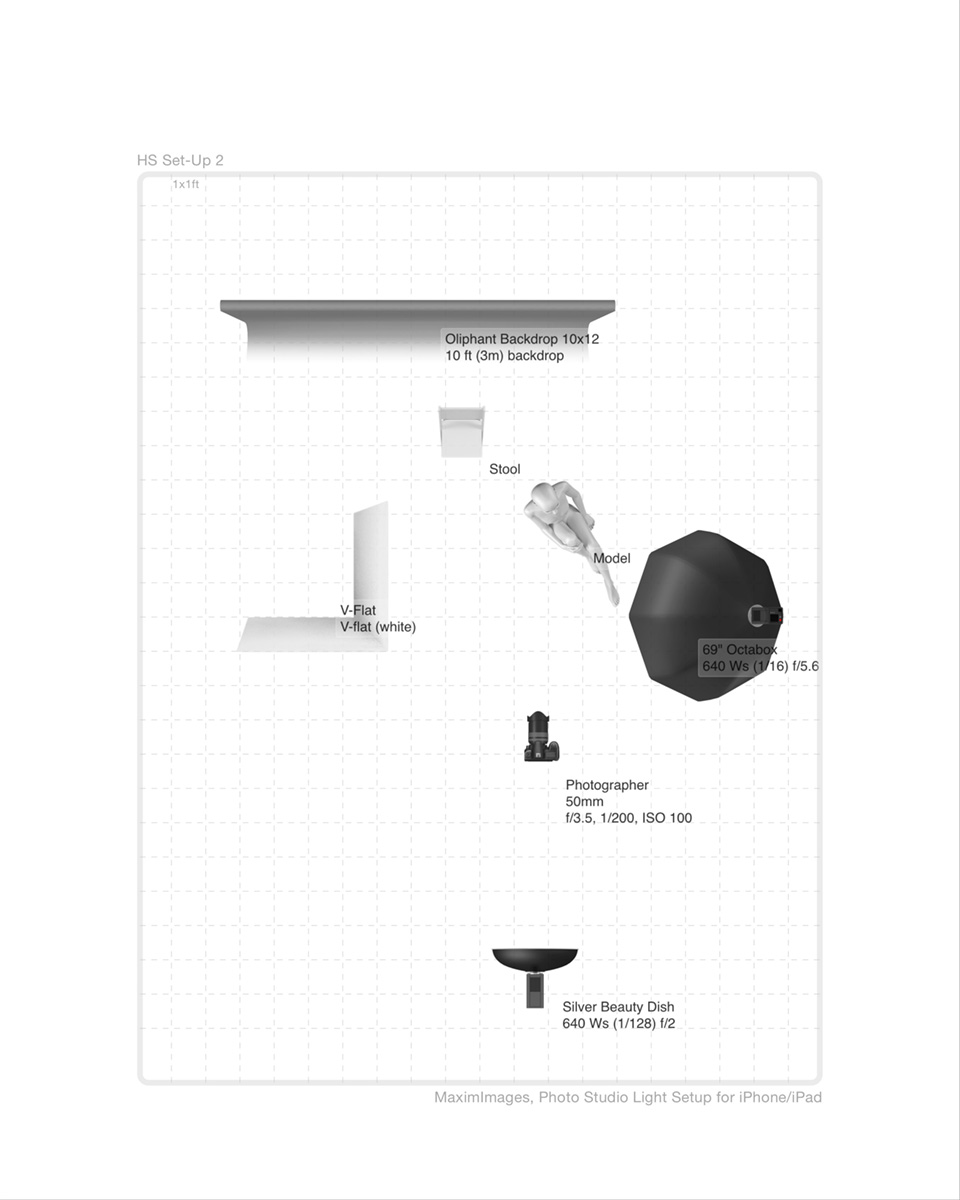 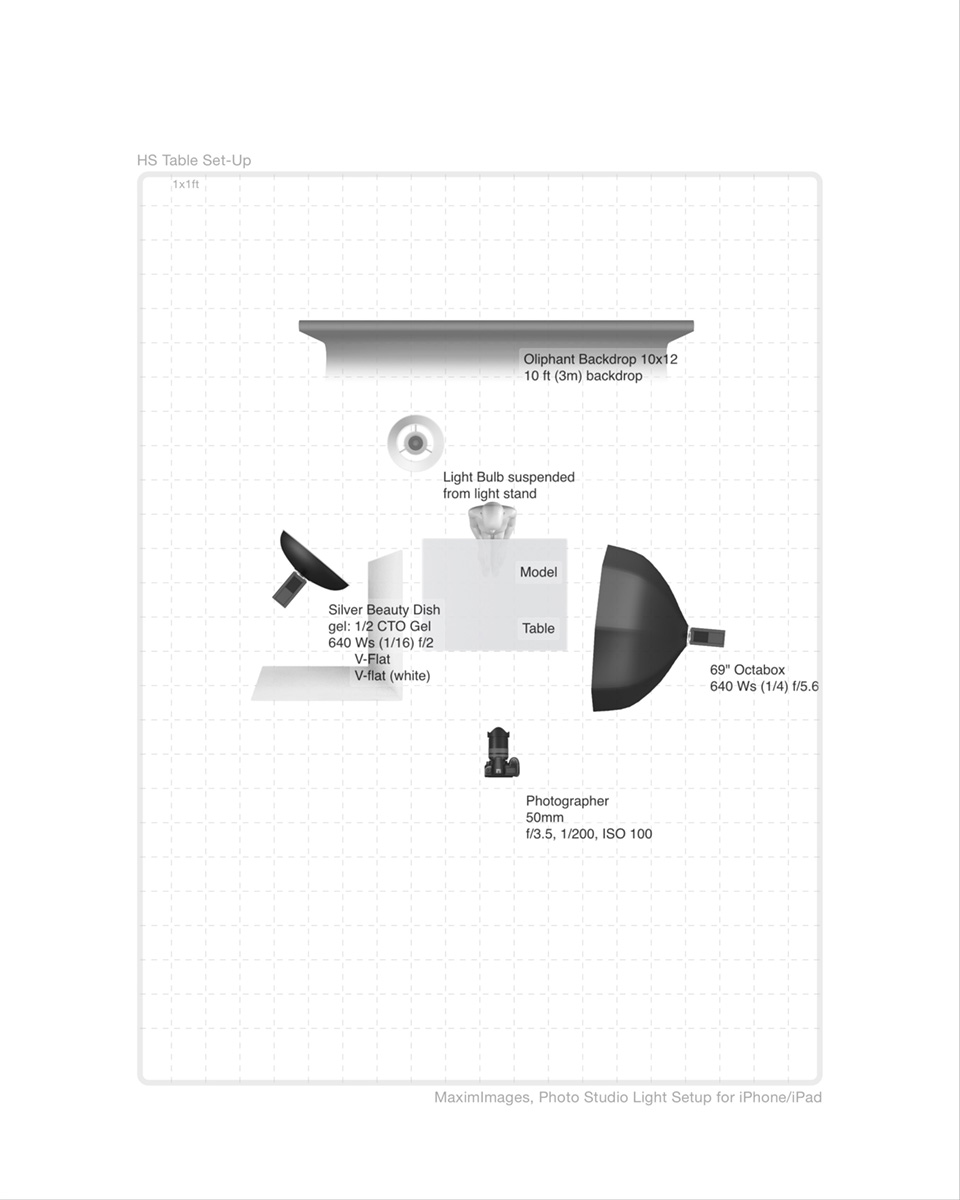 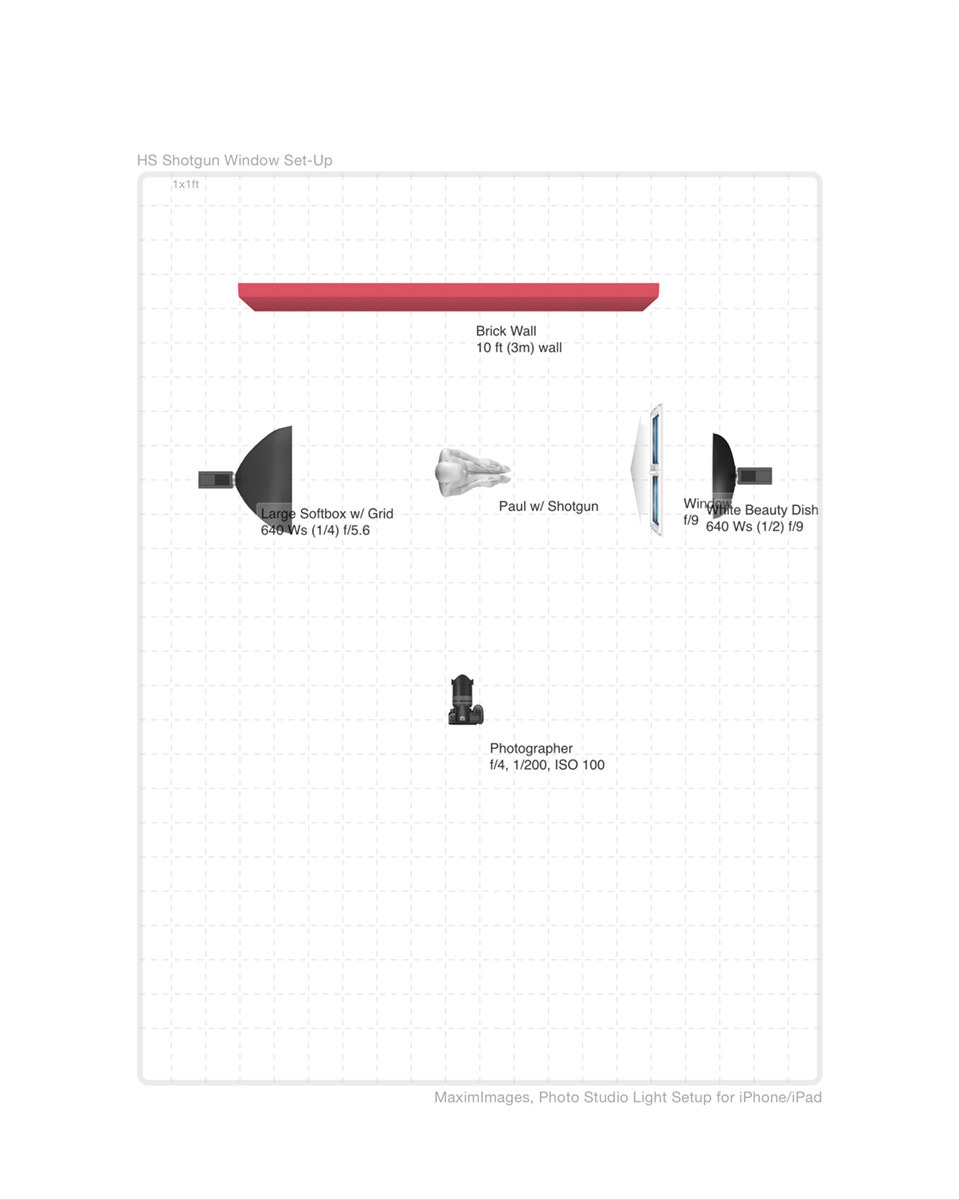 Next, I sat down for a few hours in front of ModelMayhem.com to look through countless male and female models for the right look from the talent that we wanted. I came across two great models and reached out to them to start figuring out a time and date that worked for everybody. After that was set, we booked some time at our favorite place to shoot in Houston, The Houston Studio.

Final coordination of wardrobes, arrival times, as well as some example shots of what we were trying to create were communicated in the final week leading up to the shoot and the stage was set for a very productive evening in the studio.

The first thing I always like to do after we get all of the equipment upstairs is set the tone for the shoot with music. I’ve found that if you pick the right music, people tend to have a lot of fun with the images and can almost see the image you’re trying to create with you. It really starts to get fun when you get a bunch of creative minds working together to help you elevate your imagery to a level you didn’t even see during the hours of pre-work you put into a shoot. That’s what keeps portrait photography so fresh, fun, inspiring, and addicting. For this shoot, I went with one of my all-time favorites and the all-around definition of suave, Frank Sinatra. 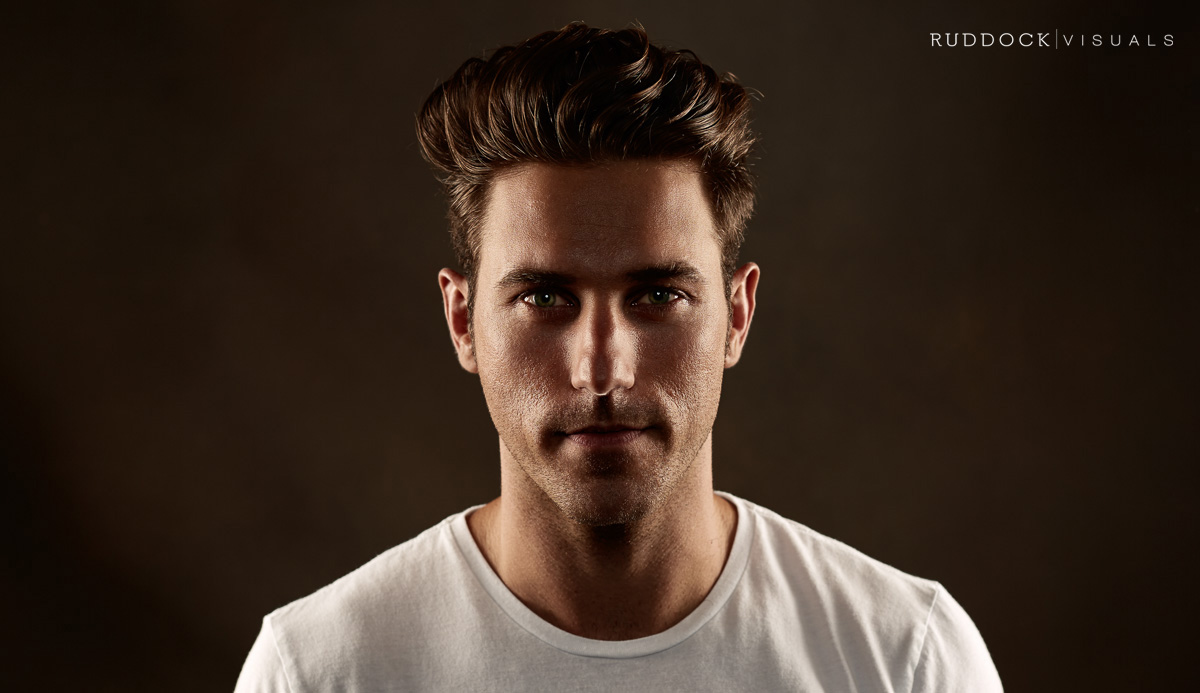 Our wonderful assistant for the evening, Caroline, and I started setting up the first set up for the harsh light and had our other modifiers ready in the wings so we could easily switch to the other setups as quickly as possible. We started out with the Harsh Light shot with Paul to get something in the bag that we had done before and we knew would look cool. It’s always great to get a good look right off the bat so your models trust what you’re doing and know that you’re going to create great images of them. The one big change I made was that I left the center of the face darker than usual and brought the side lights around a little more for a different 3-light look that we have done previously. I loved the results and could feel my own confidence levels rise to take on some of the other images that were going to stretch a little bit more of the technical as well as the creative. After we nailed that shot, we moved on to simple, soft-light images of Alexa in front of the backdrop on this awesome old stool we had borrowed from some friends. The beautiful tones her skin immediately brought out the tones in the backdrop and vice versa, and we were all standing around the laptop (always shoot tethered when you can!) smiling and loving what we were seeing. 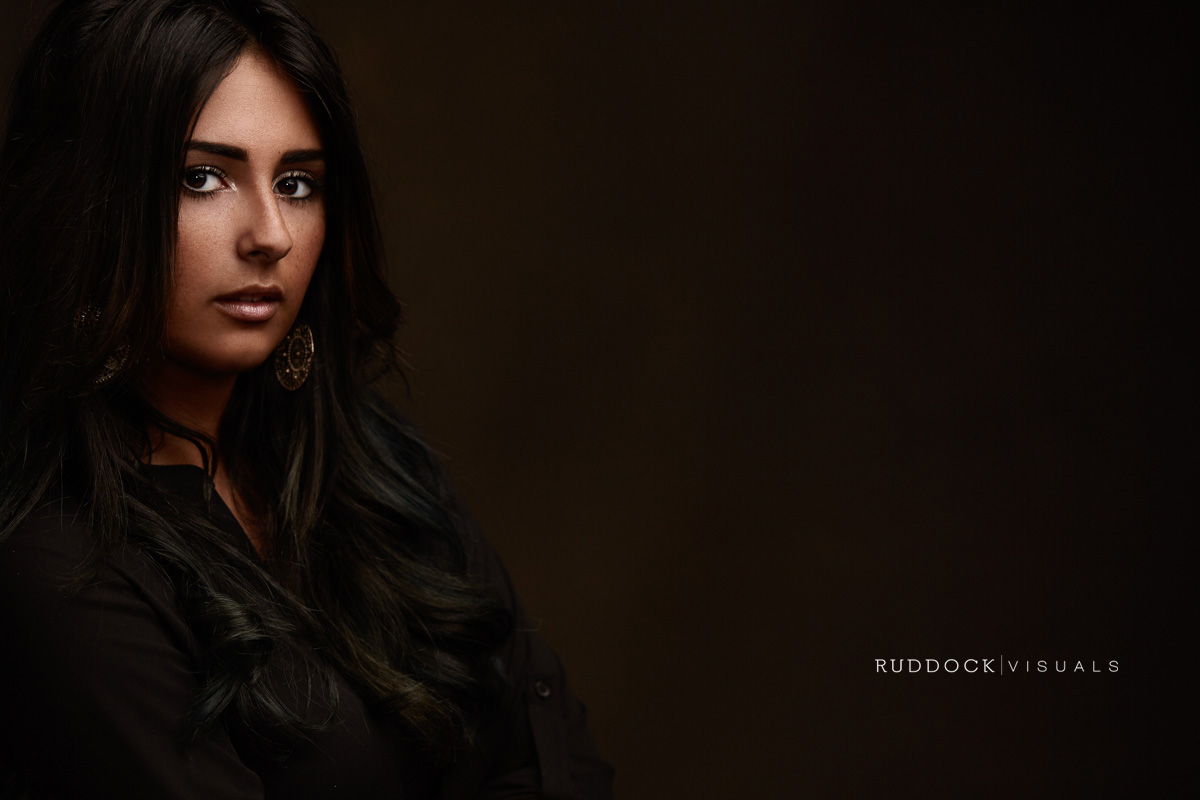 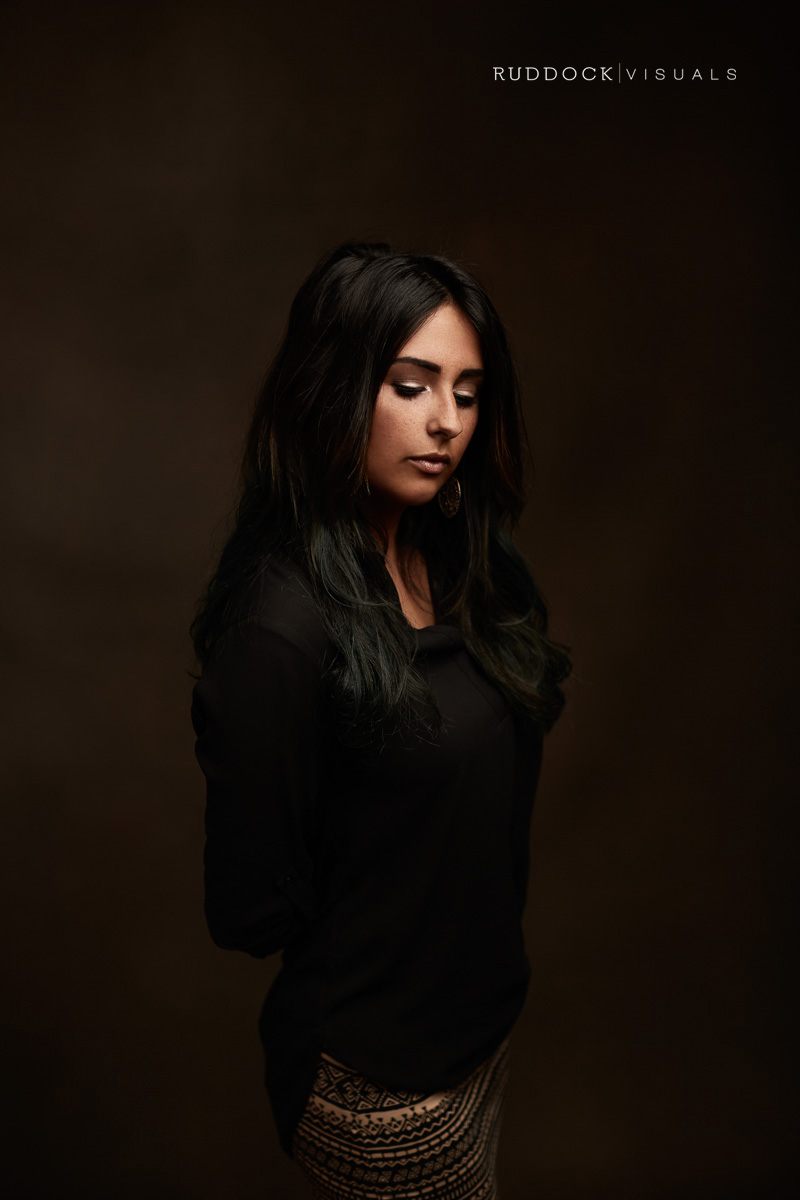 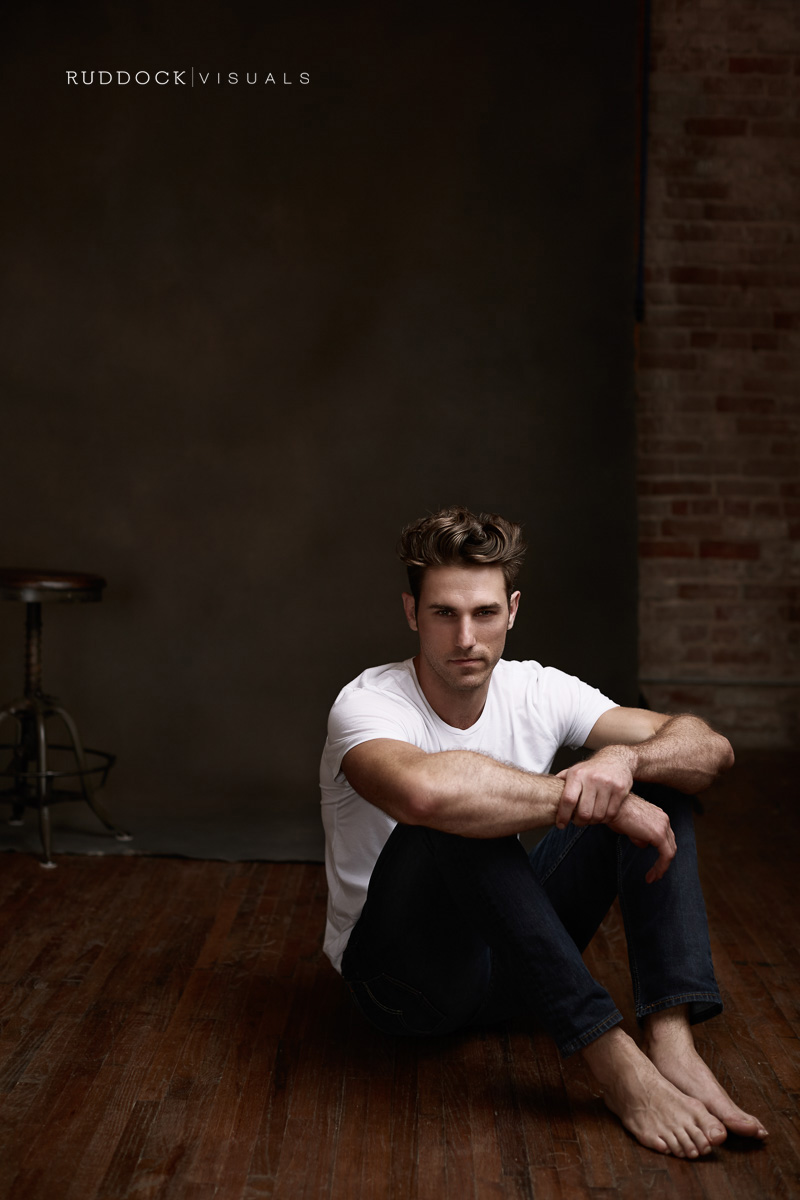 Without changing much, we were able to create a slightly more masculine and different image altogether by moving Paul to the floor and shooting off the side of the backdrop to elicit a vastly different look and nonchalance to the imagery. I kept these images slightly cooler and more muted, and after seeing how dark it was under Paul’s eyes, I brought in a little pop of light using the silver beauty dish to fill in those shadows and give another catch light to bring the green in his eyes out more. 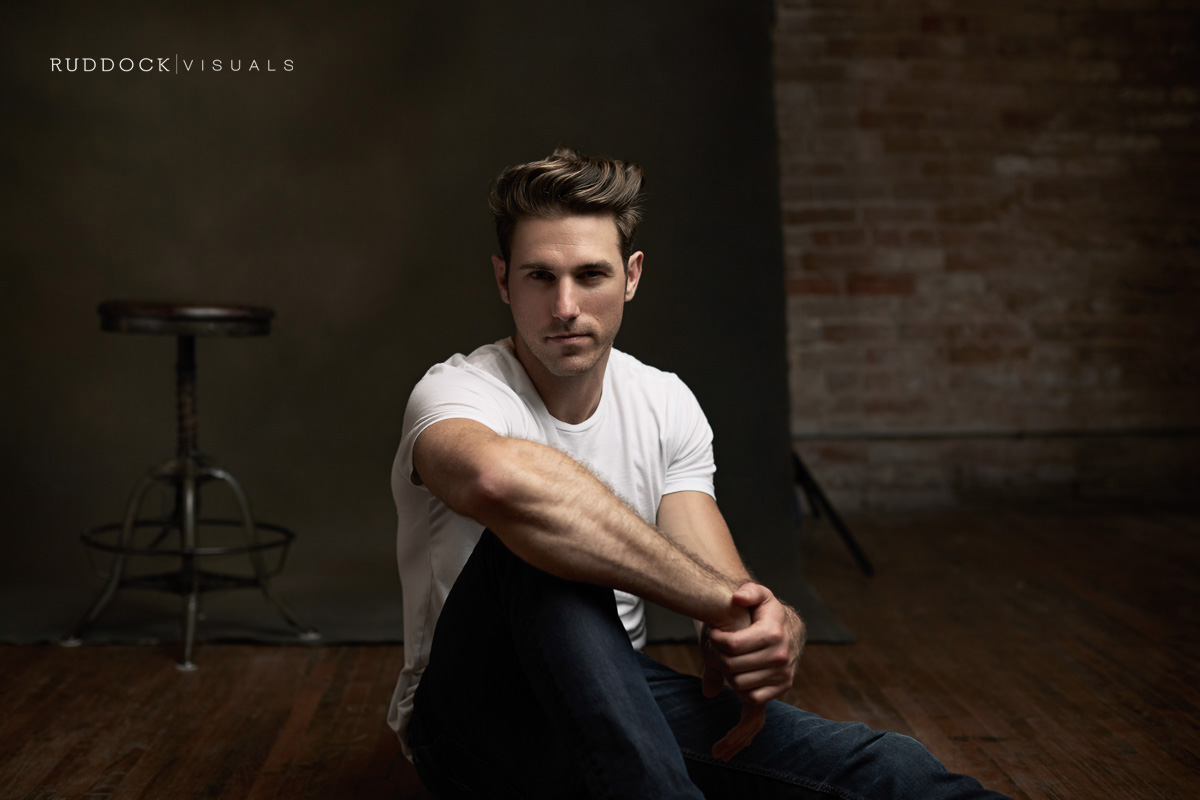 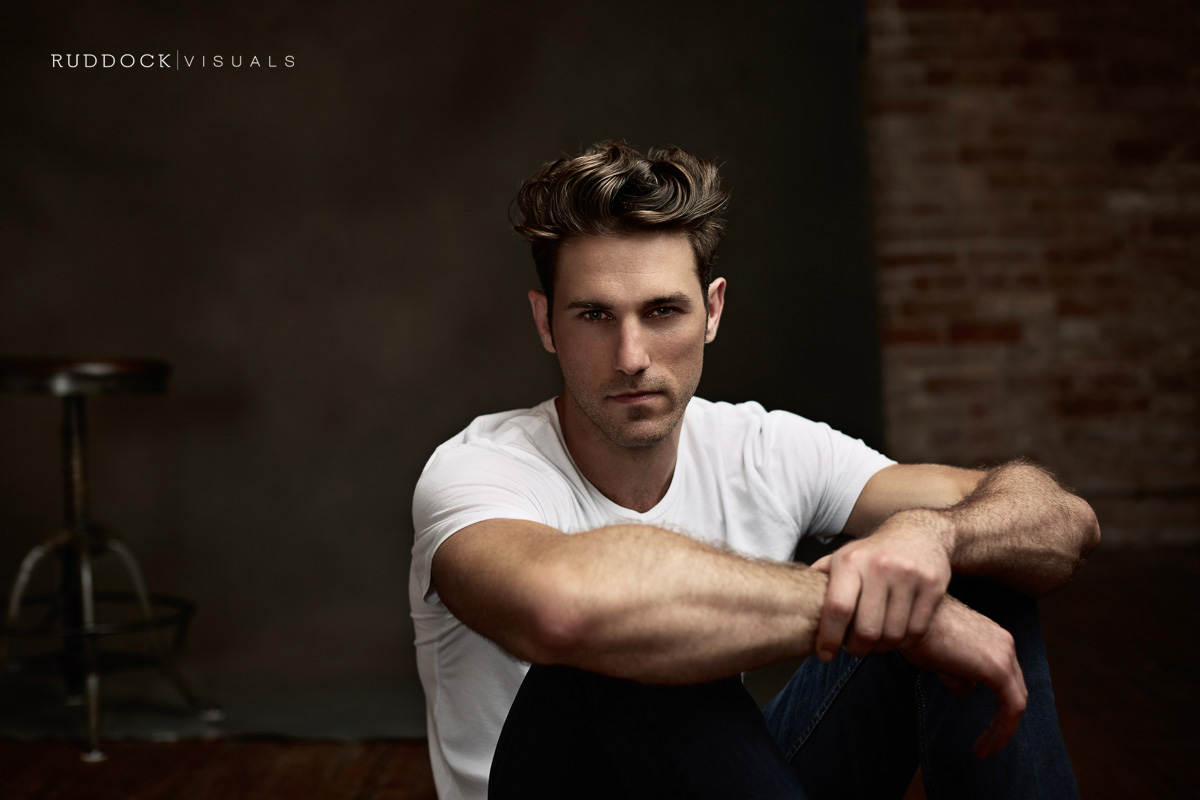 The simple, 1-light setups were out of the way and it was time to move on to the shot that I was extremely excited about. I wanted to create a really intense portrait that didn’t necessarily look overly lit. To do this, Sam and I went to Target a few days before the shoot and bought this cool, exposed-bulb light and put an Edison bulb in for an added effect. Knowing that our lighting would overpower the light the bulb could elicit, I planned to use a beauty dish with a CTO gel to throw warm, orange light onto the background and the side of Paul’s face. This motivated light is really what made the images as strong as they were, and after seeing how utterly sinister looking the images were, Paul really stepped up and gave us some killer looks to complete the intense portrait and take them to a level I didn’t even see when I was planning the images. 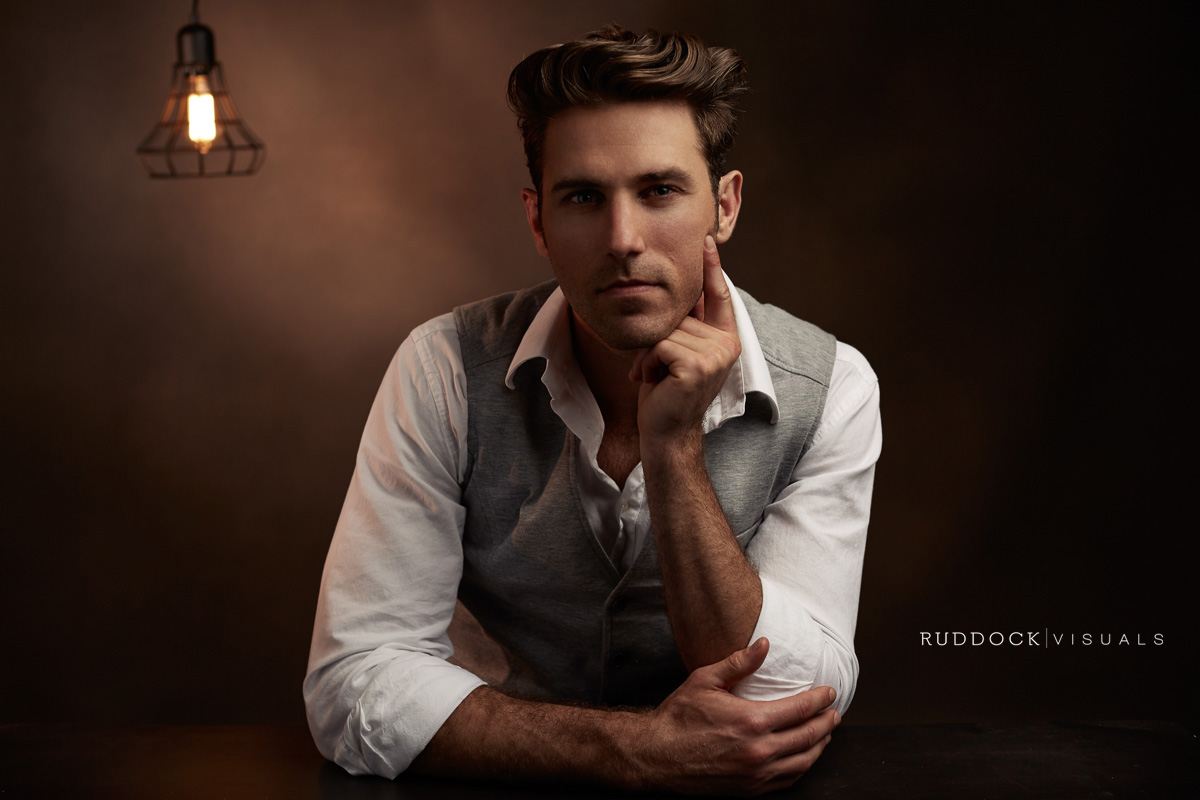 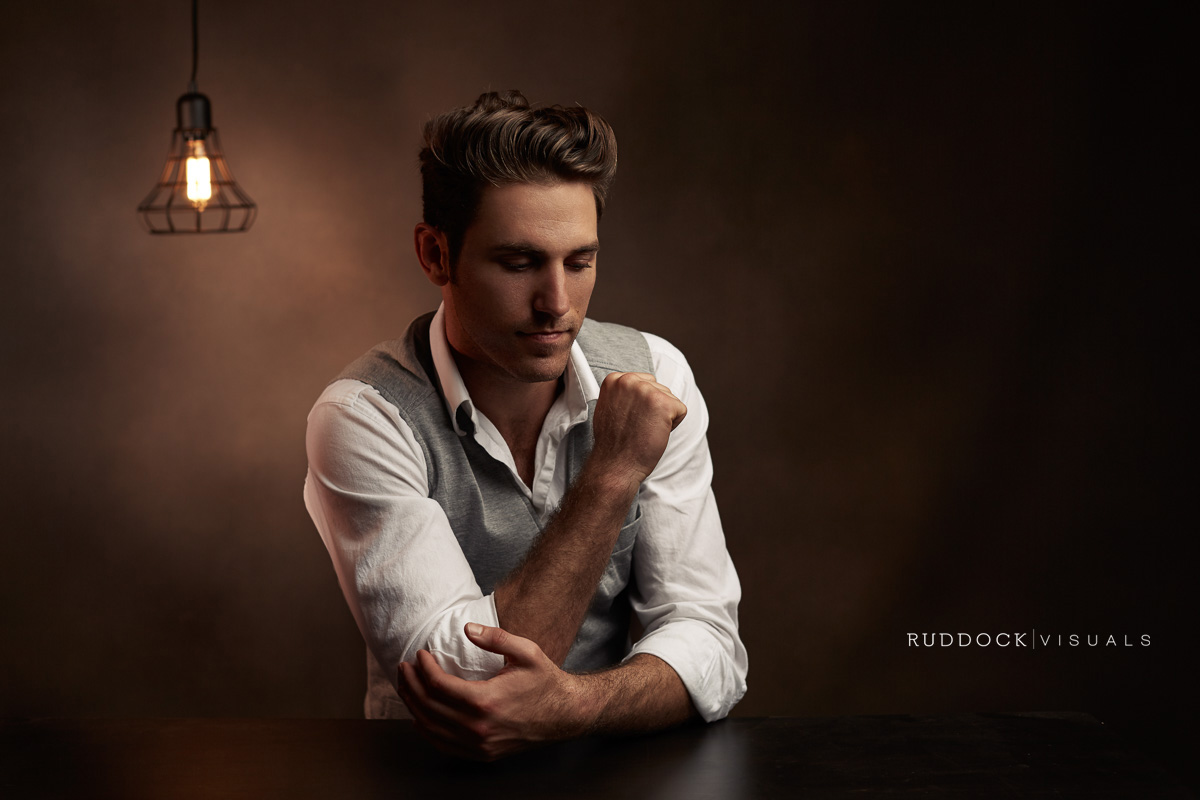 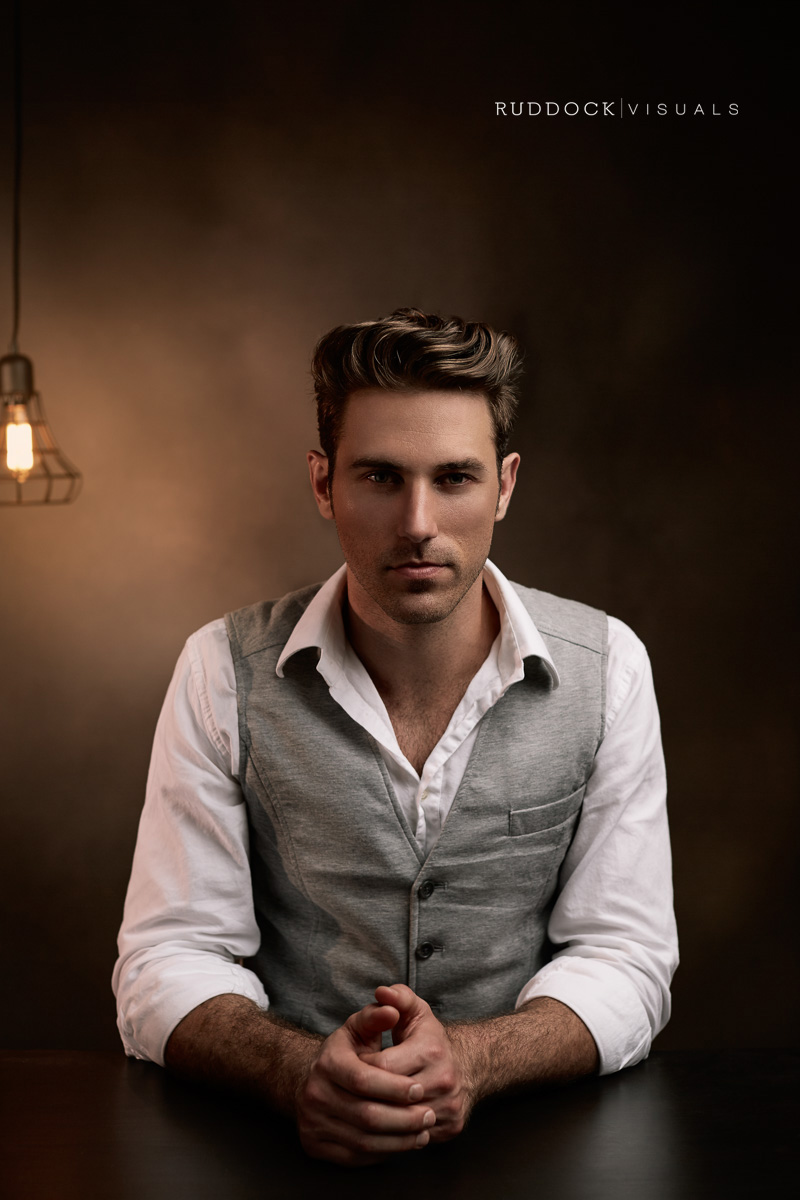 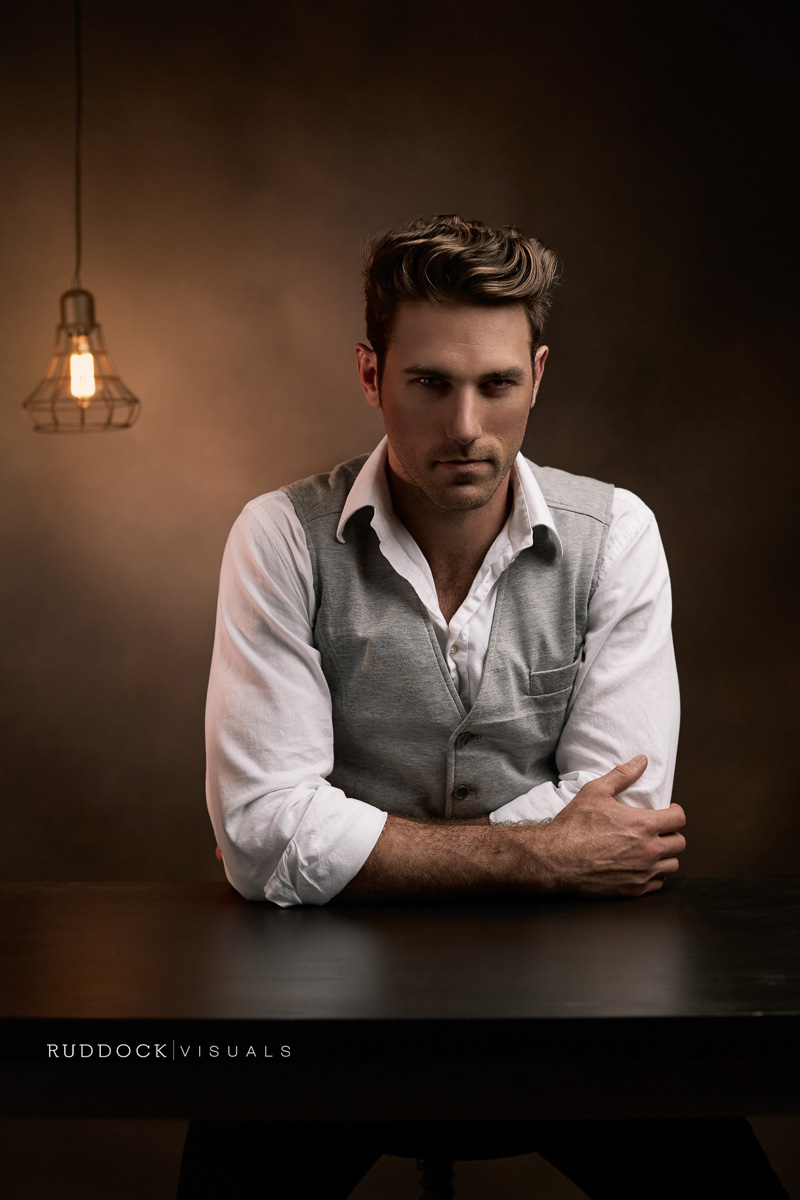 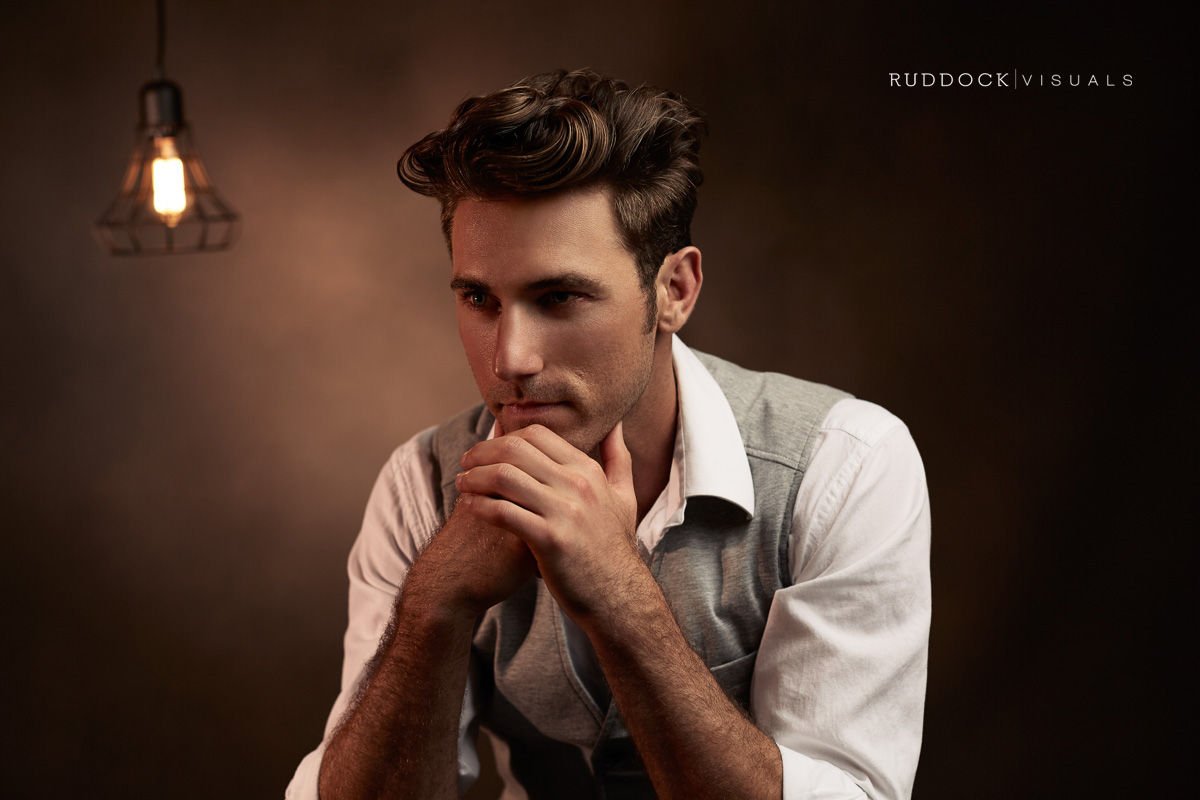 We kept that same setup and tried to add Alexa, but the warmth in her skin made the orange light really look like overkill, so we dropped that light source off and decided to really focus on her. To do so, I switched to the 85mm lens and realized I wanted even more compression so I stepped up to the 70-200mm 2.8 IS lens. Knowing that we were shooting tight crops, Alexa really made the images come to life by utilizing her hands and hair to frame and help compose some lovely shots. We added a yellow rose for a bit more color to go along with her beautiful dress at the end, but the simple shots of Alexa were by far my favorites and I love what we were able to get with her. 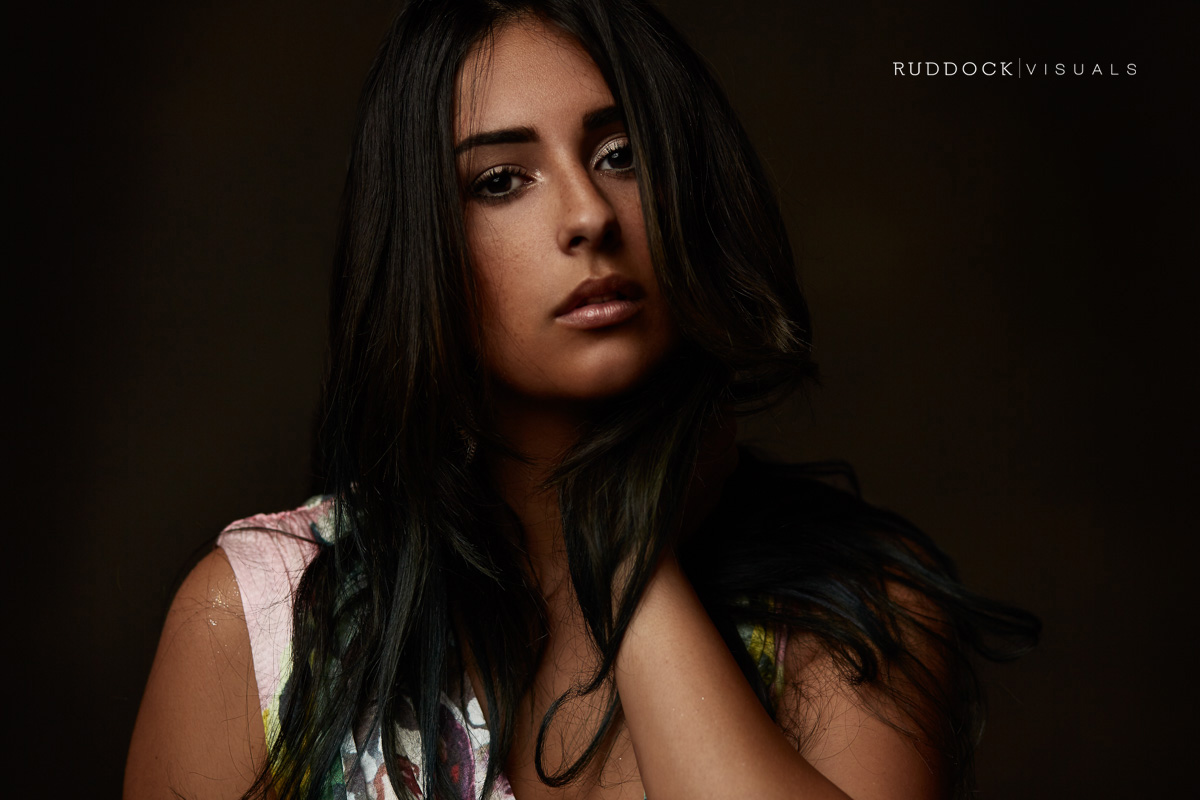 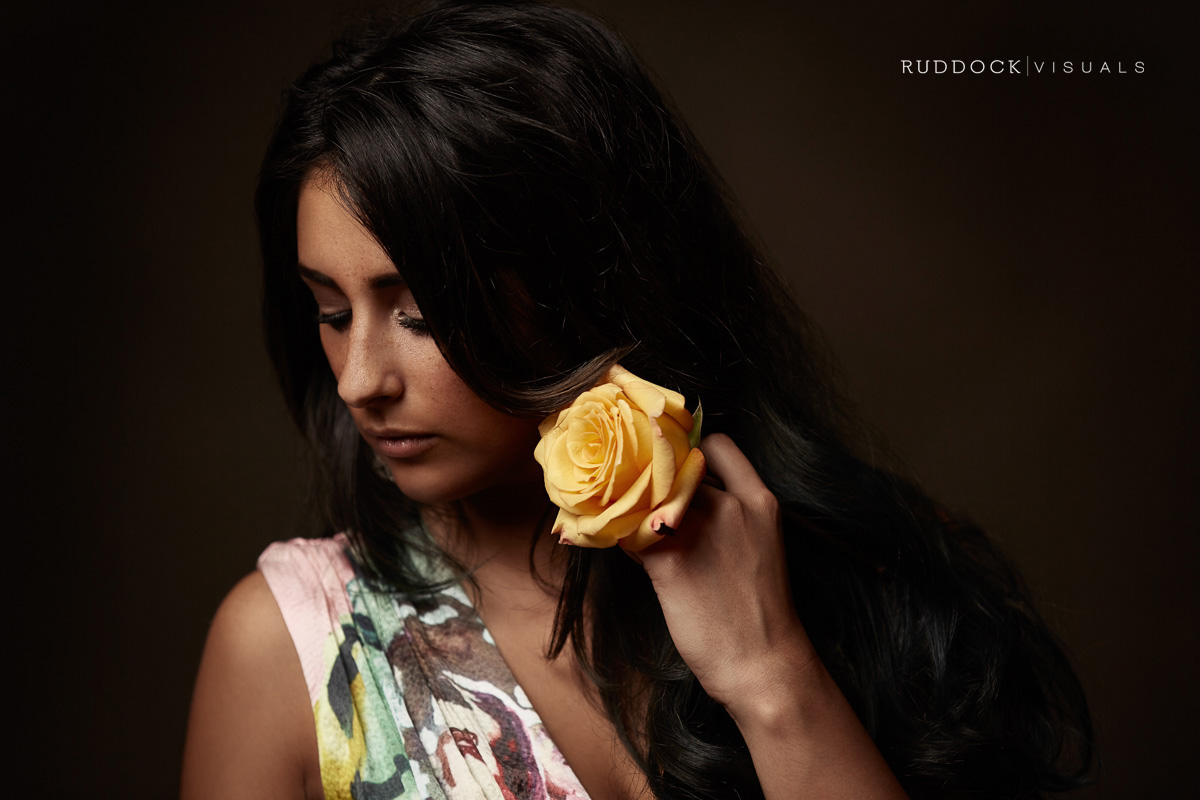 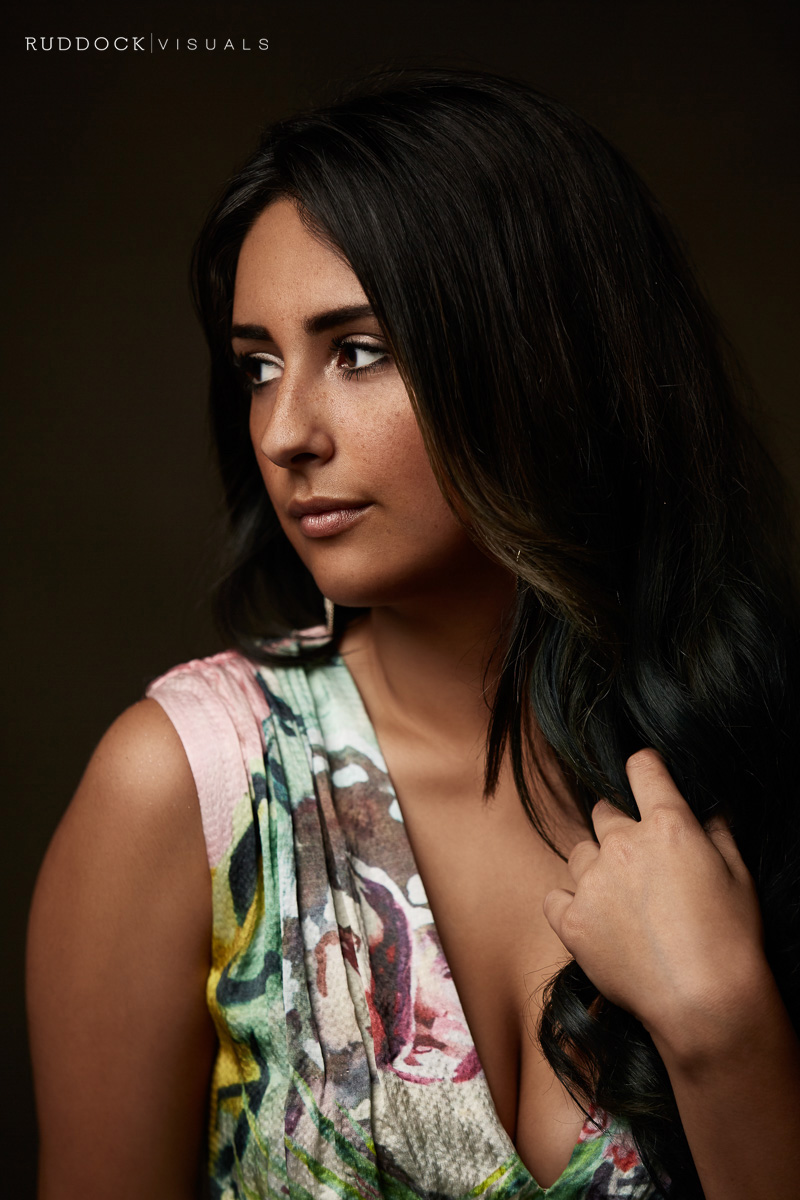 With our time running out and the light outside fading fast, I had one more shot I wanted to try. I’ve been in love with an image series that Dean Bradshaw did a few years ago called 1917. He saw it as a man during WWI with an old Springfield rifle. Well, with us being in Texas and my wife loving Country music, I decided to put our own Texas-twist on the image and sourced some inspiration from the song “I’ll be cleaning my gun”. Walking the light onto the staircase outside and blasting the beauty dish through the window, we created the effect of the moonlight spilling in on the subject as the main light. For the back light that could be coming from the rest of the house, I added a gridded softbox and we were ready to roll. There is always that moment where you’re not sure how comfortable everybody will be when there is a gun involved, so I was sure to show everybody that the chamber was open and empty and we had no ammunition in sight. I promise, I’m always careful when it comes to firearms and believe in the utmost safety. Seeing that everybody was ok, we gave Paul some general direction and let him bring the character to life. Adding just a hint of atmosphere with our fog machine, we were ready to rock and created some awesome images. (Thanks again for being an inspiration Dean!) It was a great way to end the night on a high note and I think everybody was ready to crash when it was all said and done. 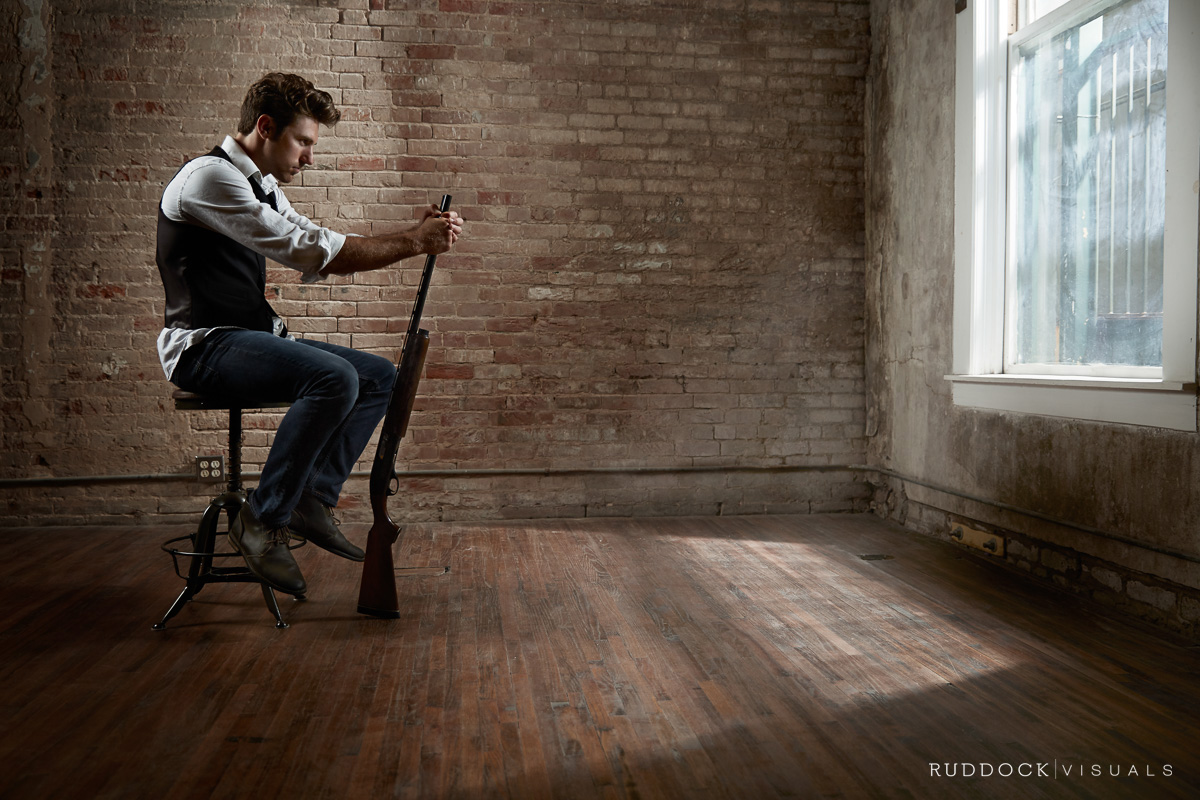 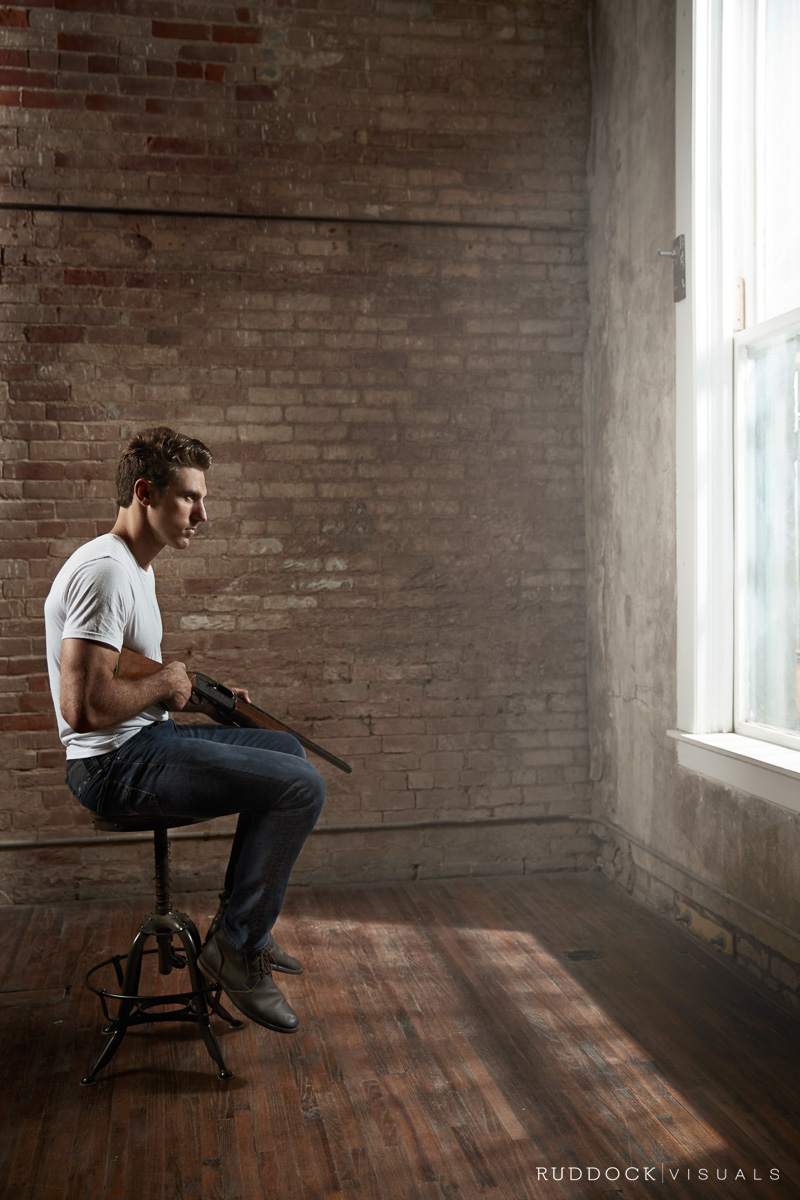 Again, I just want to give a huge shout out to Paul & Alexa for being such great models and a pleasure to work with and to our assistant for the evening, Caroline, for working her butt off and helping us make the most of the evening. It’s amazing how much fun you can have when you surround yourself with a great team of talented and driven people. We’ve already got plans in the works for more shoots, and I’m sure we’re going to be working together again soon. For updates on what we’re up to as well as exclusive BTS photos and videos, check us out on Instagram, Twitter, and Facebook, and don’t miss any of our videos on Vimeo or YouTube.

A Huge Shout Out To Everybody Who Helped!: