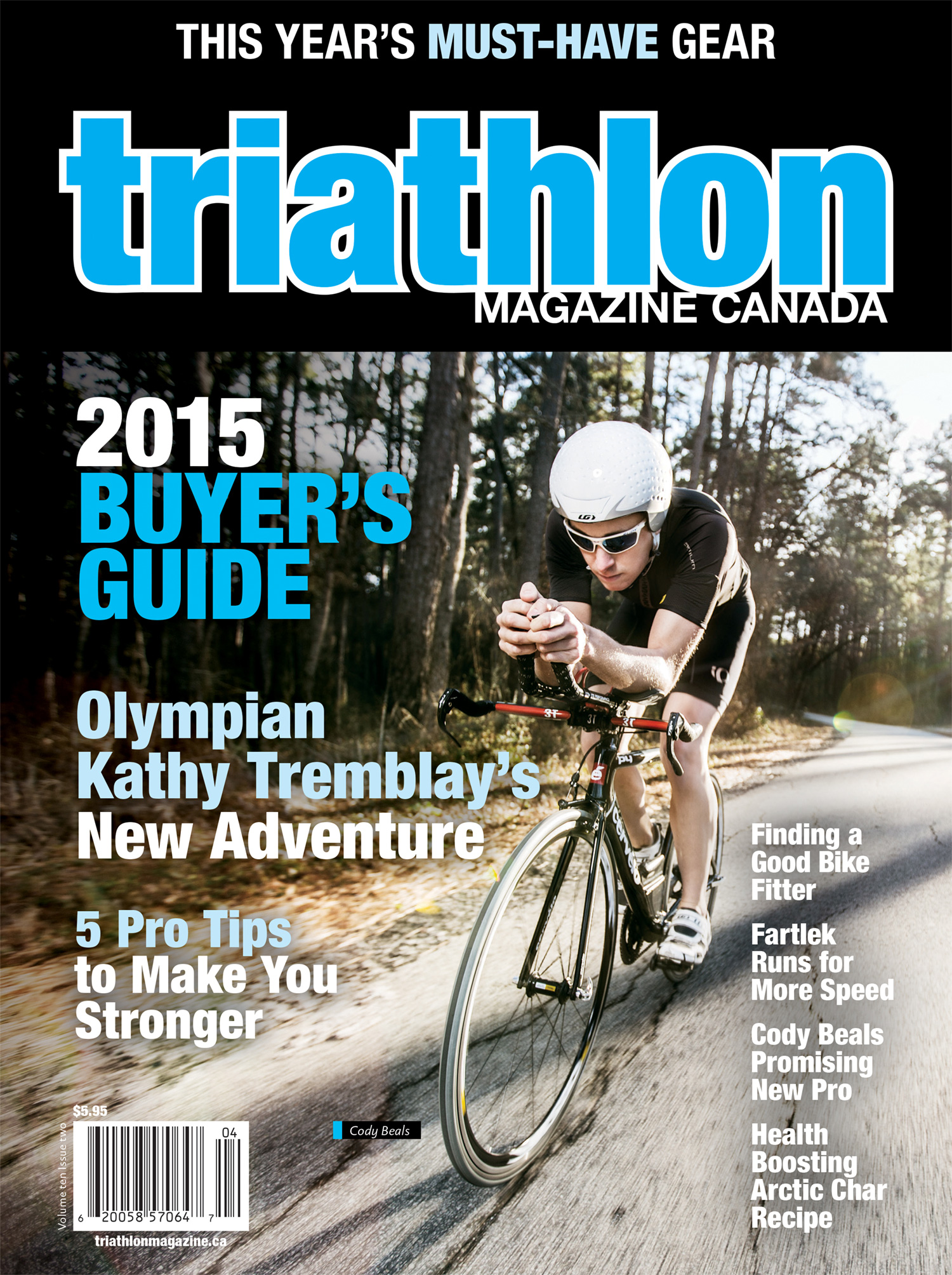 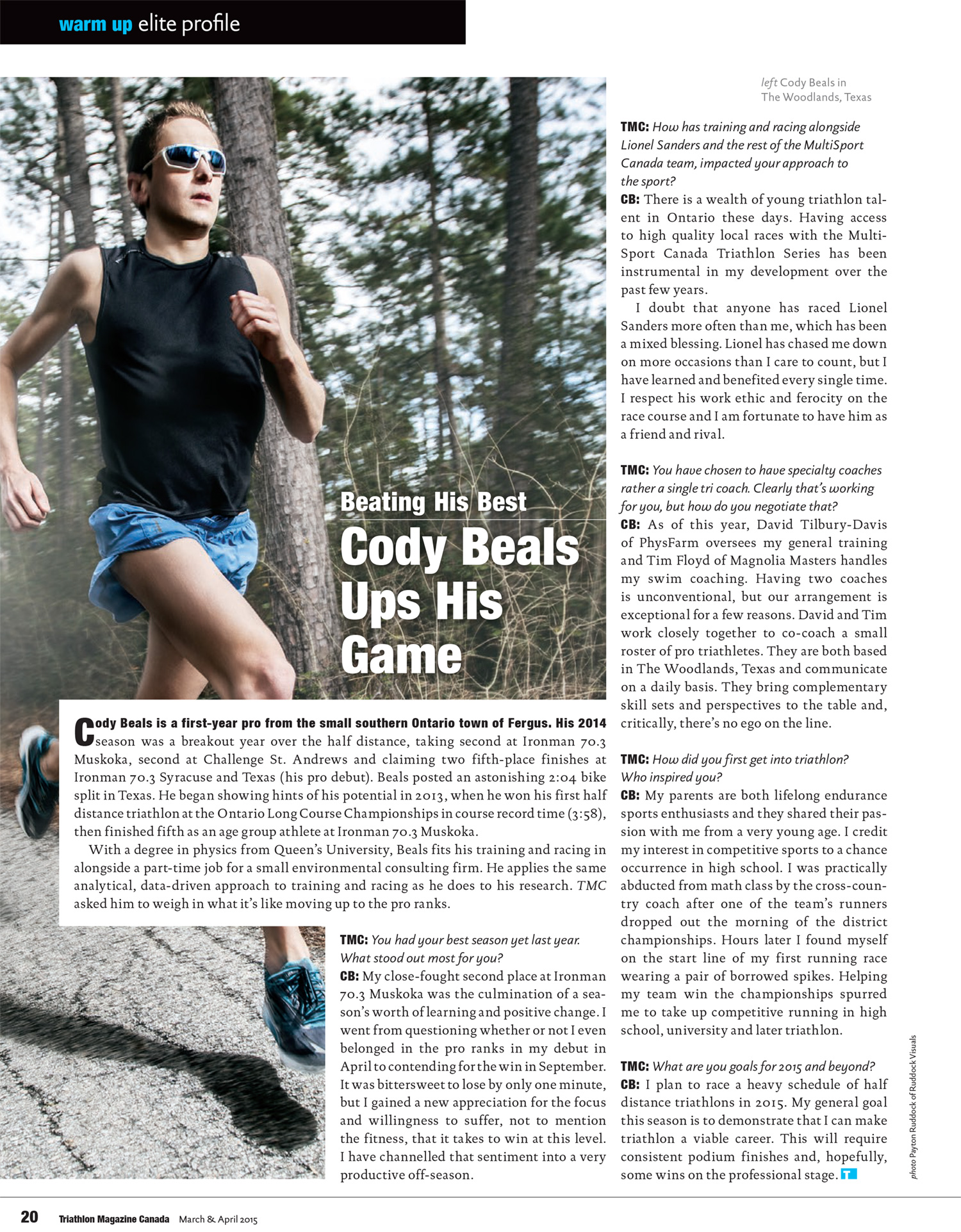 Back in January, we had the absolute pleasure of getting to work with Tim Floyd and his Magnolia Masters, Coach David Tilbury-Davis, and a few of their extremely talented Professional Triathletes while they were in The Woodlands for a month long pro swim camp (more on that to come later!) While they were in town, we worked with a few different athletes to get some portraits of them as they headed into the new racing year that is quickly approaching. One of those young talents was Canadian Triathlete Cody Beals.

We met Cody for the first time through the program all though he is already making a name for himself in the world of the 70.3 distance as a phenomenal cyclist and a strong rookie looking to make some serious waves. With a background in physics, it’s no surprise that his attention to every detail when it comes to being aero is calculated and pays off when you look at his speed vs. power output.

With all that said, we couldn’t wait to get him behind the truck and get some shots of Cody tucked up in aero and flying along the road! 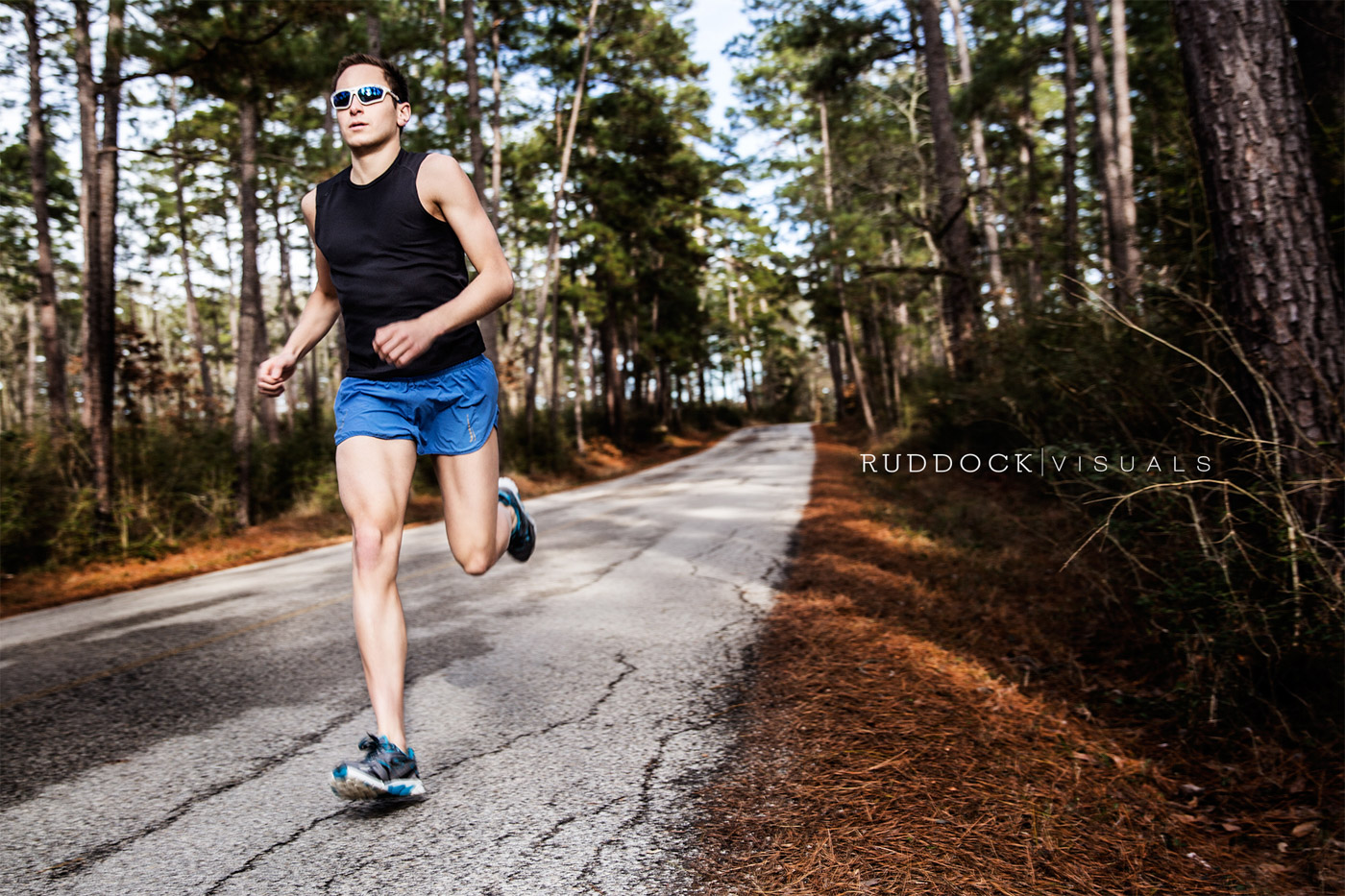 There were a few different things about this shoot that I really was excited about and wanted to get into. First, my new Profoto B1 light and Profoto Air Remote just arrived along with a Profoto Beauty Dish (my modifier of choice for shooting out of the truck) which had me completely stoked! No bulky battery pack, on-the-fly adjustments to lighting power from the Air Remote, and the badass name of Profoto to back it all up and give me the confidence I needed in the new system to walk into a shoot and use it with very little testing. It all proved to be completely worth it and I can’t say enough great things about these amazing lights – but I digress…

We met Cody at the edge of town because we wanted to head North to get a little different scenery that we did in The Woodlands. Anybody who knows Southeast Texas knows that would typically mean a 3.5 hour drive to get away from tall pines, but I didn’t want to lock Cody in a car with us for that long and scare him off before we even took a photo, so I settled for taking him to a different road with different trees. The Sam Houston State Park is really a gorgeous site and is the main stretch of road for the Ironman Texas race course, so I figured we’d incorporate a little bit of the IMTX course into the shoot. After the 45 minute drive up to the park with our gear, Cody’s bike, and Cody in tow, it was time to get shooting. 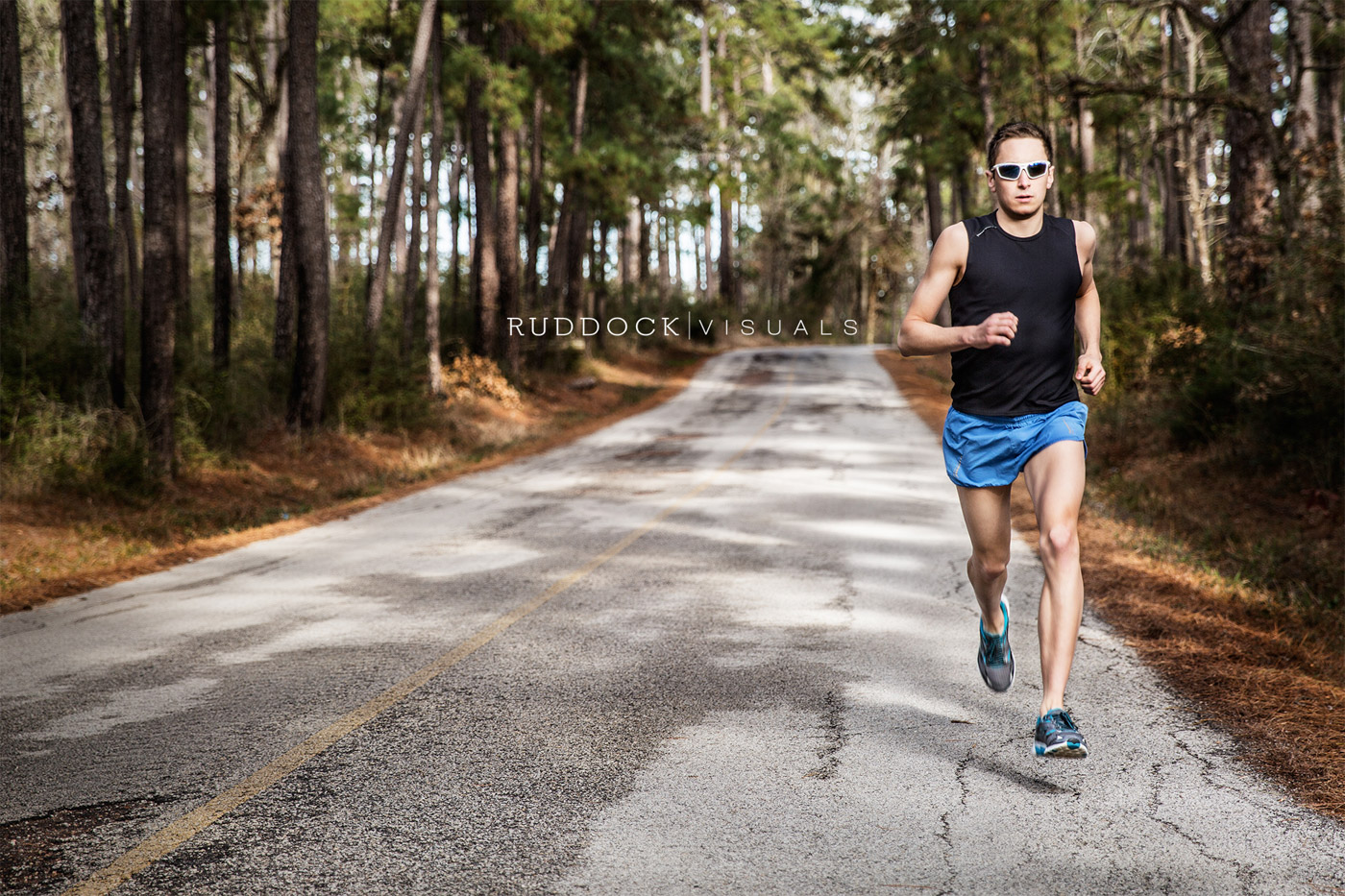 I still had my old Paul C. Buff lights with me in case of an emergency, but I really wanted to put the Profoto B1 through the ringer, so I shot the entire shoot with just one light source and the ambient sunlight. Using the B1 with a Beauty Dish, I set up and had Cody run laps through the shoot zone and clicked away. We got some great shots right off the bat shooting the way I was always used to shooting: Run through, click once, check the back of the camera to see if I captured the stride, light, and placement of the runner all at the correct moment – repeat. Since we nailed a few quickly, I started changing up my position to get some less “safe” shots, as well as changing up lens choices and – finally – testing out the B1 recycle time and flash duration by motor driving each time Cody ran through. The B1 performed beautifully and we were able to really capture some cool images of Cody running in his Skechers GoRUN4s. Awesome new shoes from Skechers by the way, they really seem to be filling the gap that K-Swiss left few years ago! 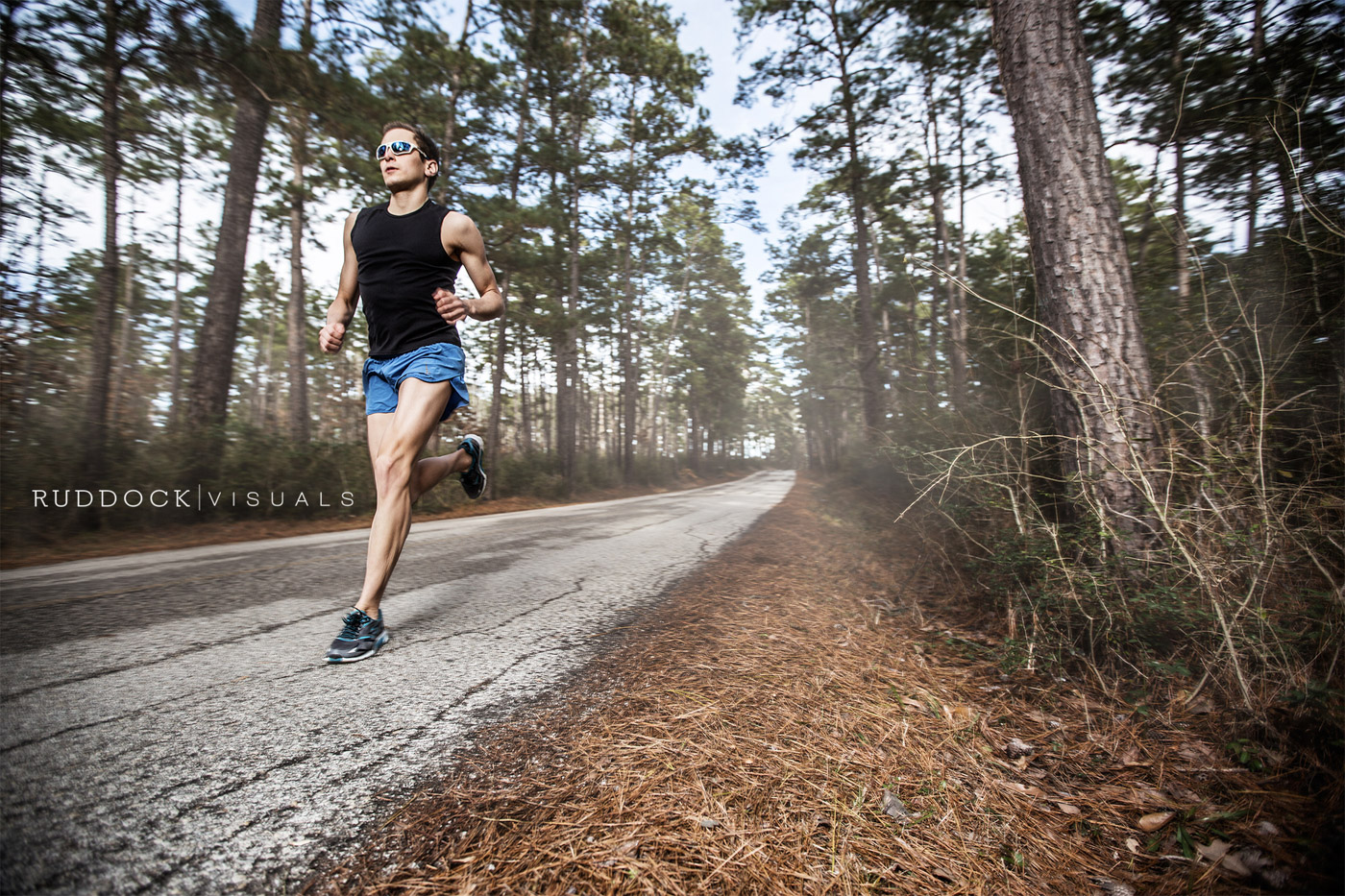 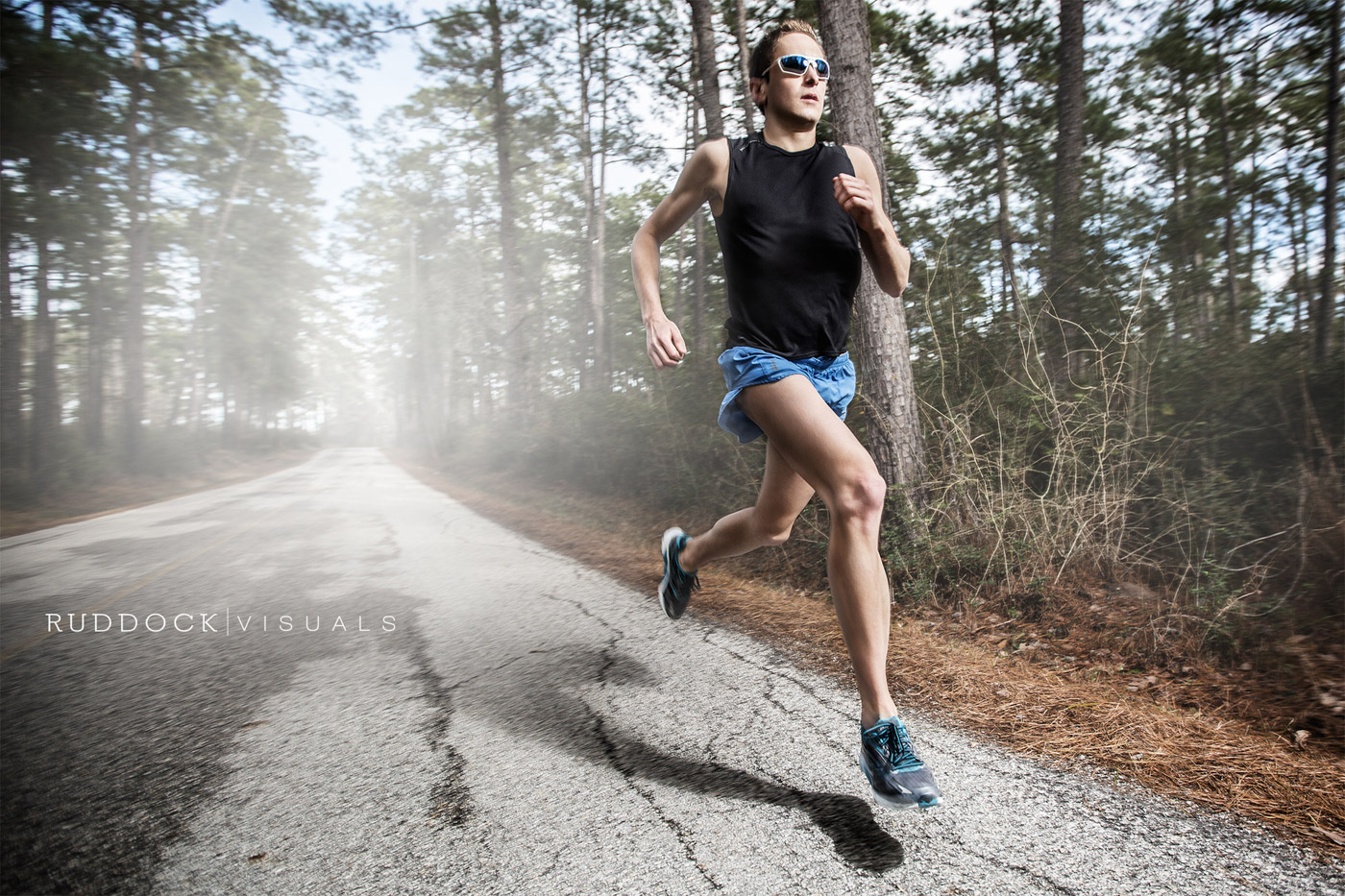 After getting what we needed on the run, we set off to a spot where we could set up the bike portion of the shoot. Same setup as always but no cable running back off the light, no battery to worry about tumbling out of the back of the truck, and it was time to do what we do!

The new road did prove to be a little more hazardous than we like and a little narrower than we would have wanted, but we always try to maintain a safe and cautious outlook when we’re working with our riders and their safety always comes first. If you DO decide to try our little setup on your own, it is at your own risk and we hope that you will exercise the utmost caution when doing so. We’re talking about cars, bicycles, and people in precarious situations, so safety and effective communication has to be frontmost in everybody’s minds. 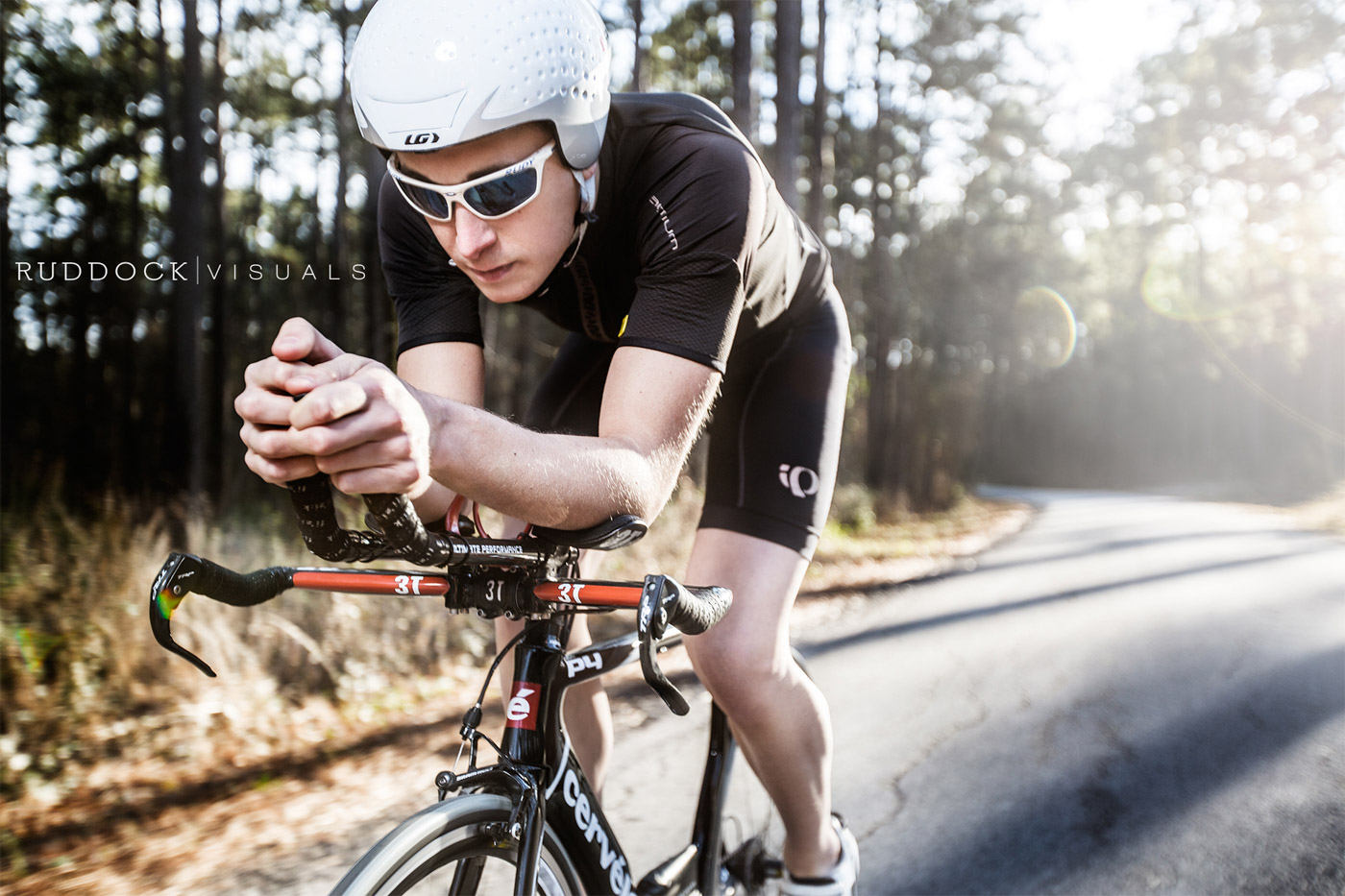 Alright – taking the orange vest and hardhat back off and picking the camera back up. We absolutely NAILED the timing and the sunset streaming through the trees behind Cody as we road East was perfect. After just one run, we knew we had some great shots so we played around and had Cody ride up past the truck a bit to get some profile shots, and had him go out of aero and do some more standing/climbing shots. Since Cody is known for aero though, I decided we really wanted to show that so we ended up leaving them out of the final selections – always know your athlete and what they do best!!! It’s about showing who they are as an athlete and not necessarily just about getting something you THINK my look cool. Just my food for thought… 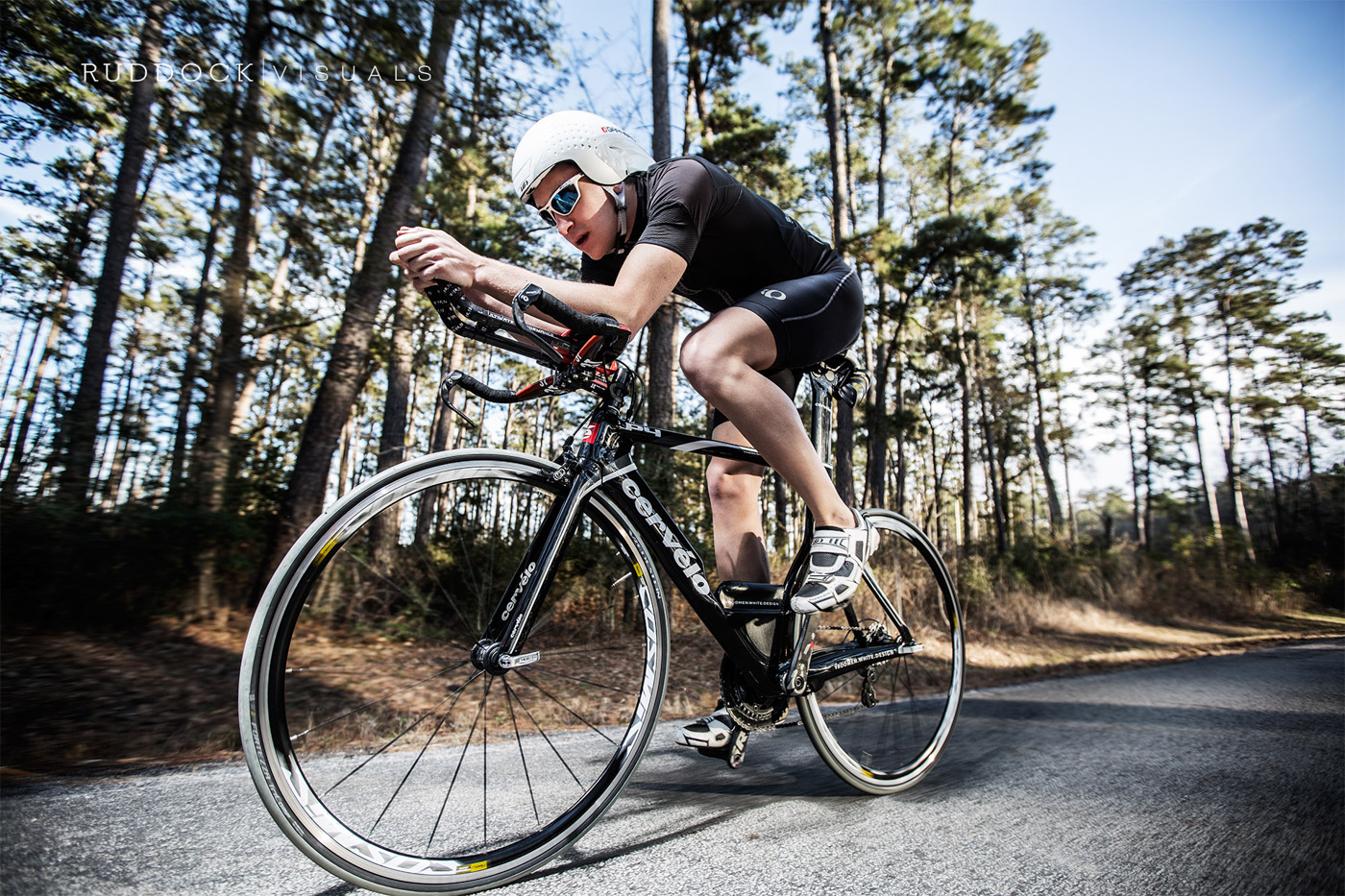 So, after all of this I must be wrapping this thing up right? Wrong! The coolest part of the shoot didn’t even happen until after we were done. A few days after the shoot with Cody, he sent me an email and kicked me into overdrive on his photos because he had an article coming up in Triathlon Magazine Canada and they needed the photos in a week. (Ahh!) We got to work and got the shots in and waited patiently to hear back. Well… somewhat patiently, this was my first editorial so I was probably more fidgety than cool, calm, and collected, but I’m just going to blame that on all the coffee I was drinking to keep focused on working the images. 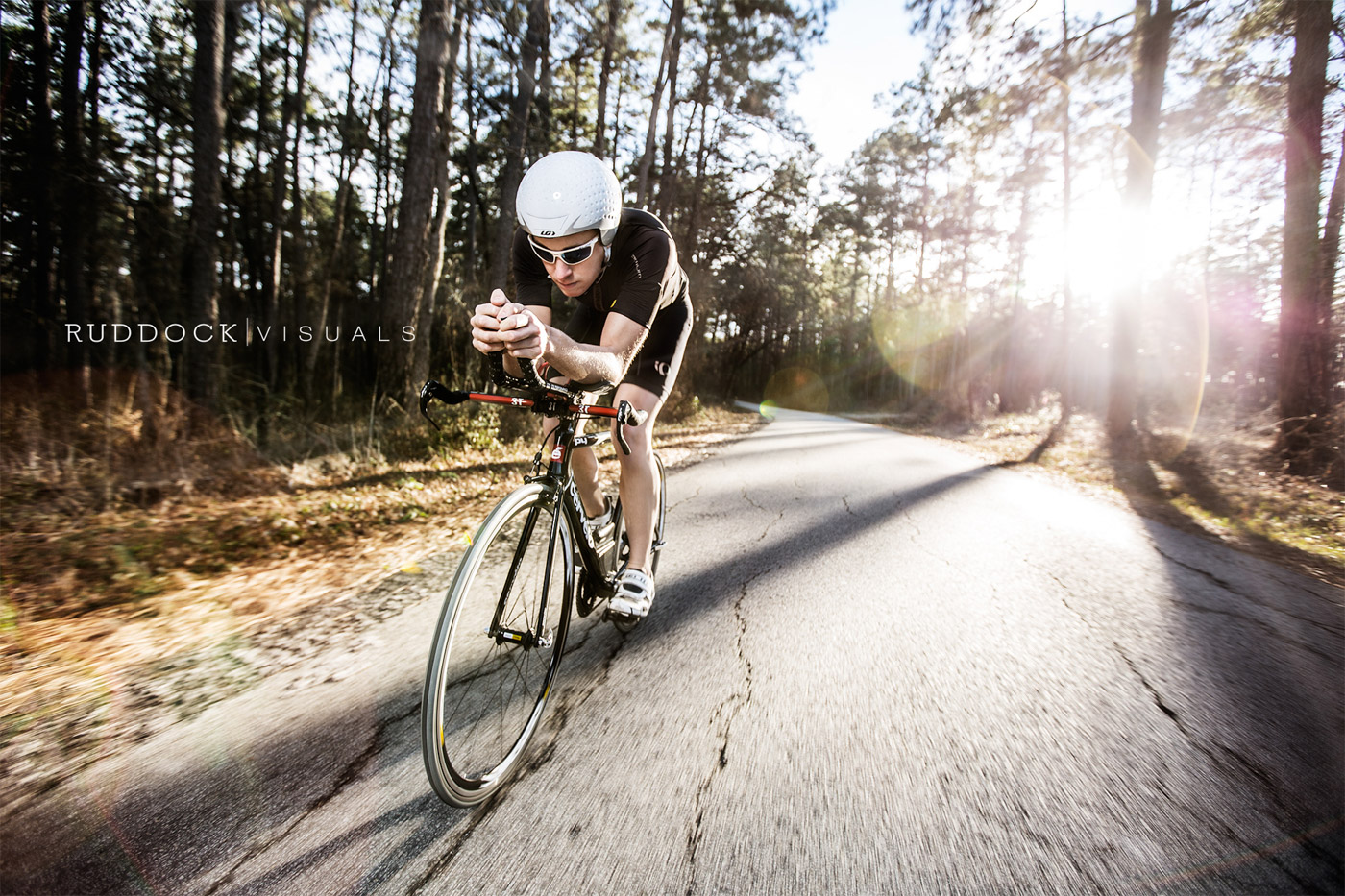 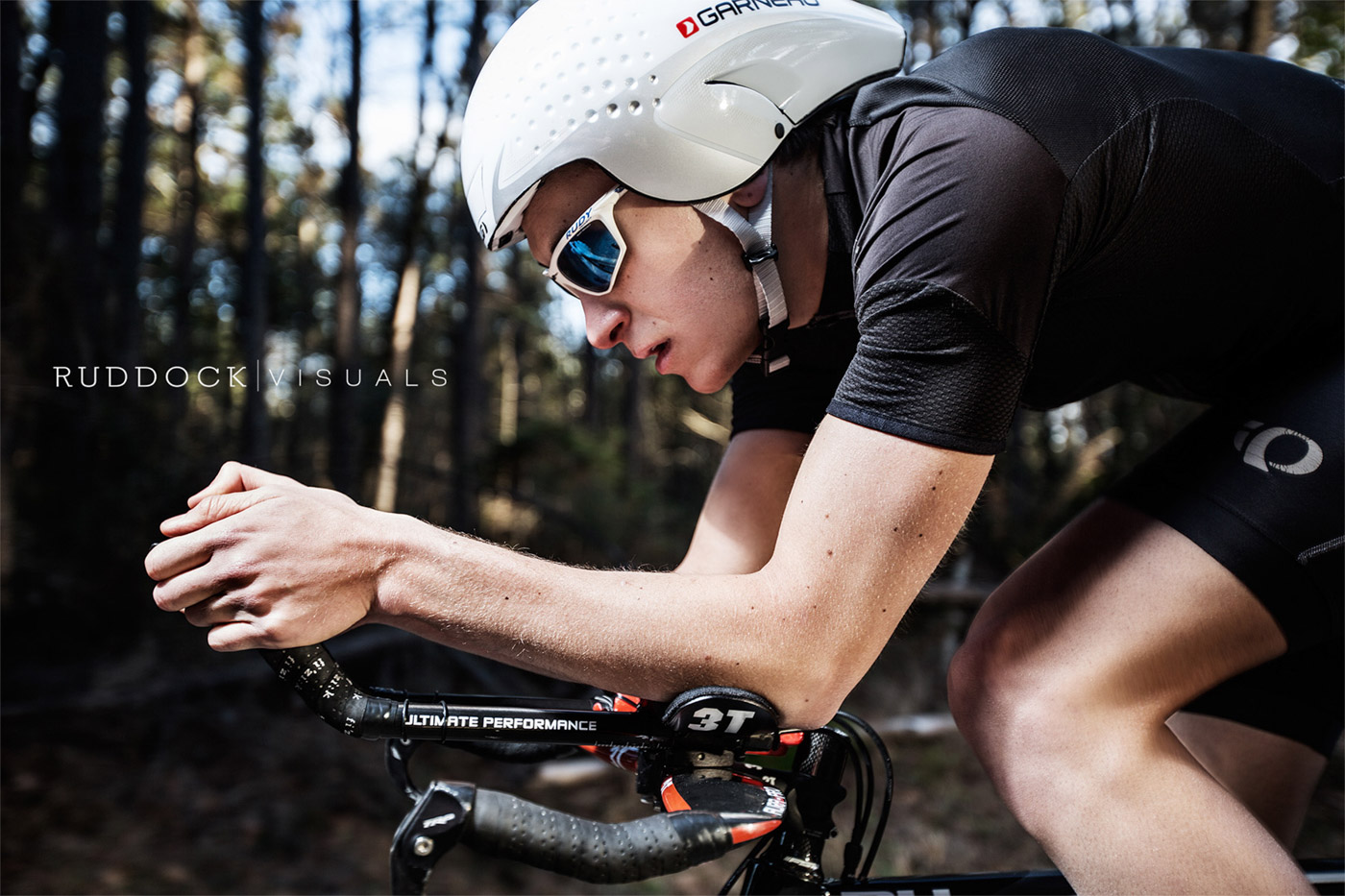 Anyway, after a few emails we were expecting to get a 1/2 page spread of Cody running for his profile. What I got back was that they had decided to use the shot of Cody from the bike on the COVER OF THE MAGAZINE! First time in a magazine, first cover of the magazine. I’ll take it! We couldn’t wait to share the news with Cody and the results that Tri Mag Canada came back with were awesome. They really did a great job and we can’t thank them enough for giving Cody and Ruddock Visuals our first covers (both of us!) and they are a wonderful company to get to work with.

So what I really want to conclude this whole thing with isn’t a summary of the images (you can see them all throughout the page) or a quick blurb about the BTS video (check it out on Vimeo or YouTube or just here below the paragraph) but a quick message directed specifically to photographers like us. You don’t have to live in LA or NY to enjoy photography and try to get some national recognition, just surround yourself with awesome people – in our case athletes – and offer your services. People love to have great images taken of them and as long as you approach it humbly, typically they’ll want to work with you. You don’t have to be commissioned directly or paid up front to have it work out, you can make a deal with a friend and see what comes of it. We were thrilled to get to work with Cody and get him some awesome images for his 2015 year as a part of the Magnolia Masters Camp, and from that we were able to get our first cover from what was supposed to be a small shot in a profile. God is good and hard work is better than luck any day of the week! Keep on shootin’!